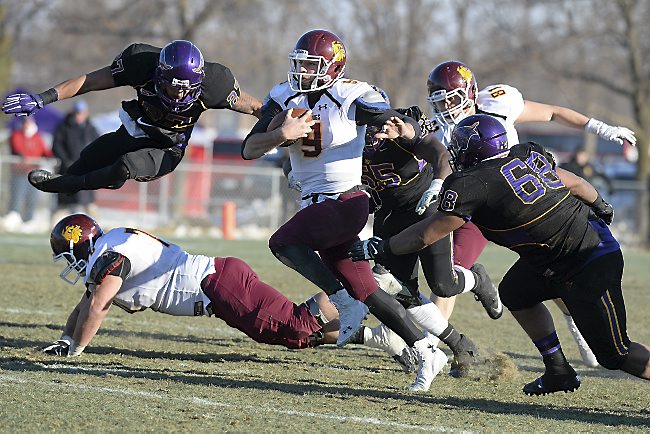 #2 Bloomsburg came back from 21 point deficit, but could not finish it. #1 Concord fended off Bloomsburg with a 32-26 win at home.

Both teams got on the board early. Concord got a touchdown when Brian Novak hit Ryan Stewart for an 8 yard touchdown, but the extra point was blocked and returned for two points. Concord led 6-2 and would go up 23-2 following a field goal and two more touchdowns, one via the special teams game and one via the ground game. Bloomsburg got a late touchdown in the first half to make it 23-9 at the break.

Bloomsburg tied the game at 23 in the third quarter with a Tim Kelly touchdown run and then a pass. Concord responded right away to take a 29-23 lead before a Bloomsburg field goal made it 29-26. It became a 6 point game at 32-26 with 9:15 left in the game, but Bloomsburg was unable to score on fourth and 11 from the Concord 12 yard line. A late interception by Concord sealed the game.

#6 West Georgia continue their unlikely run after beating #5 Valdosta State on the road 31-17.

West Georgia got out to a 14-0 lead midway through the first quarter thanks to a 3 yard touchdown run from Seth Hinsley and a 54 yard touchdown pass from Dallas Dickey to Walter Hibbler. Valdosta State was able to make it 14-7 at the end of the first quarter. It was 14-10 after a field goal and then Hinsley ran for his second touchdown to give West Georgia a 21-10 lead. Valdosta State made it 21-17 before the half and their defense stopped West Georgia from taking a bigger lead with an interception of Dickey.

The battle of Minnesota went to #2 Minnesota State-Mankato in an emphatic victory. Mankato won 44-17 over #4 Minnesota-Duluth in an excellent second half performance.

An early Duluth interception was turned into a touchdown from Ricky Lloyd to Austin Rieder for 14 yards. The next Mankato drive ended with a field goal and a 10-0 lead. Duluth was able to get a field goal midway through the second quarter after Mankato failed to convert a fourth and 1 at the Duluth 12 yard line. Duluth tied the game at 10 shortly before halftime with Drew Bauer ran for a 3 yard touchdown.

Mankato opened up with a field goal in the third quarter and forced a fumble to get the ball back in Duluth territory. That fumble was turned into a touchdown and their next drive was also a fumble as the game was solidly in Mankato’s pocket with a 27-10 lead. Duluth came back to score a touchdown on Bauer’s 20 yard pass to Taylor Grant. Mankato came back with a field goal before making it a 37-17 lead on Connor Thomas‘ two yard run. Mankato capped the scoring by intercepting a Bauer pass and bringing it back to the 2 yard line. Chad Zastrow scored it from there for a 44-17 final.

#2 Colorado State Pueblo held off #5 Ohio Dominican at home 31-28 to move on to the 2014 NCAA Division 2 Football Playoffs Semifinals.

ODU made it 24-21 on their first drive of the second half when Ronald McCloud ran for a 3 yard touchdown. Pueblo missed a 40 field goal on the ensuing drive to keep it a three point game, which is how the third quarter ended. Pueblo did have another chance for points on ODU 10 yard line, but lost the ball. They forced a punt and that was returned 83 yards for a touchdown by Daniel Wise. It took a few drives, but ODU made it 31-28 after Miller connected with Dez Stewart for a 15 yard score. ODU had two more drives to get at least a field goal, but failed to get past midfield and Pueblo was able to hold on for the victory.

Both games will be played on Saturday, December 13.