Unpacking the Oklahoma and Texas to SEC Realignment Speculation 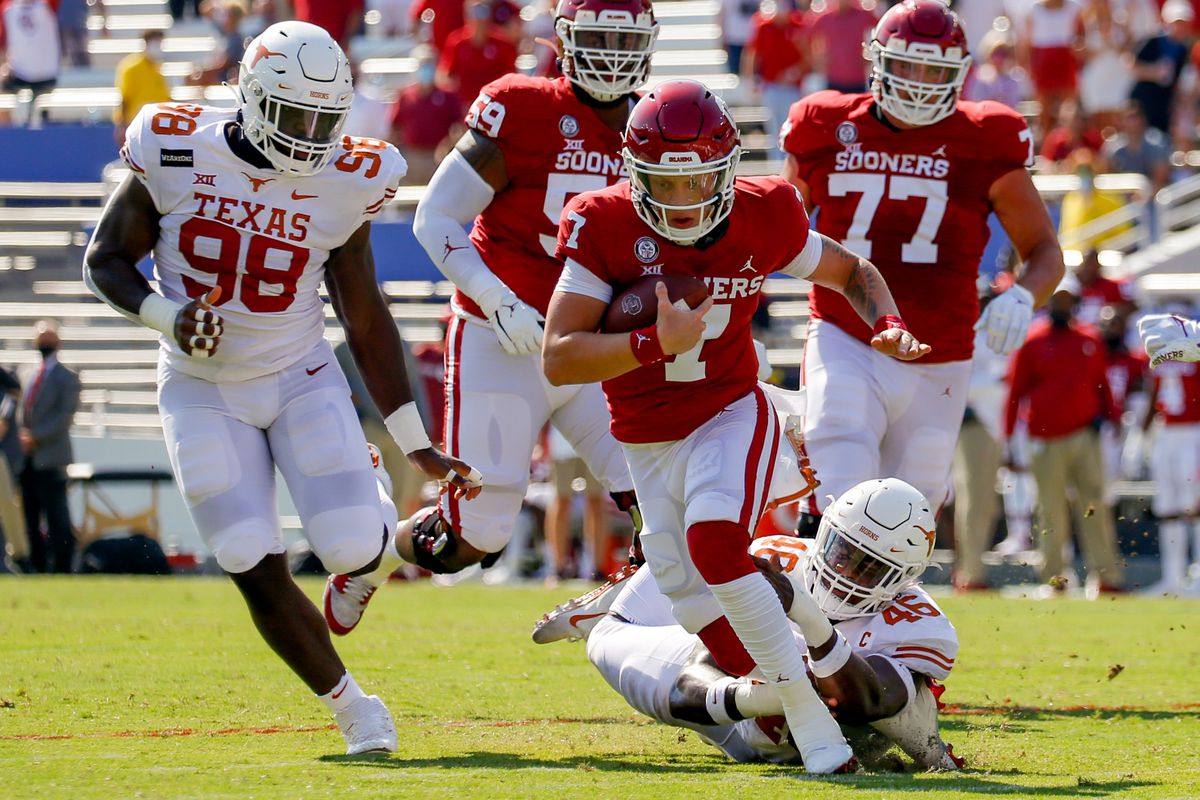 We have a few frequently used idioms here at Sports Enthusiasts when talking about realignment in college sports. It’s usually some form of “the realignment wheel never stops” or “the dominos keep falling.” However, July 21 brought a different type of potentially earth-shattering news: Texas and Oklahoma are reportedly considering leaving the Big 12 for the SEC.

We haven’t seen this magnitude of realignment news in a decade when Colorado and Nebraska left the Big 12 for the Pac-12 and Big Ten, respectively. Let’s take a breath and unpack what this could mean for the conferences most directly affected (potentially), the teams, and some of the other indirect impacts as well.

This one is easy. The SEC – already the best conference in college football – would get even stronger with Oklahoma and Texas. What is already a tough 8 game slate would essentially become a proving ground for the multiple college football playoff teams if the playoffs expand to 12 teams.

The SEC could also leverage this for an even higher TV rights deal from ESPN and they would get a big boost. What other conference would have so much firepower in college athletics? The Big Ten currently has a solid argument but Oklahoma and Texas on top of what already is in place for the SEC? The SEC brand would become enormous and that has benefits off the field with the new NIL laws and would strengthen SEC athletics even further.

The SEC’s toughest decision would be how to split a 16-team conference. Would they move Alabama and Auburn to the East division to accommodate the two newcomers? One idea: remove the divisions, add a 9th conference game, and keep 4 annual rivalry games while rotating the other 5 remaining games. For Alabama, they would keep annual tilts against Auburn, Georgia, LSU, and Tennessee. This is great in theory but the athletic directors may not be the biggest fans of this alignment, to say nothing of the alumni and rabid fanbases voicing their opinions.

For Oklahoma, Texas, and the Big 12

We are lumping these three together because it will help understand some of the issues that pertain to all members of the Big 12 as well as individually for Oklahoma and Texas.

Oklahoma and Texas will see larger revenue streams in a 16-team SEC though the path to the CFB Playoff will be tougher. This is partially mitigated if the expected 12-team CFB Playoff expansion comes to fruition as a 16-team SEC would garner multiple playoff bids and potentially half the field (or more) in its strongest seasons.

The Big 12 would be eviscerated without Oklahoma and Texas. They would have to fend off vultures for the remaining 8 teams by being aggressive in its future membership. The strategy here would be to pick off the top teams from the American and Mountain West. They’d have to consider going after Boise State, Central Florida, Cincinnati, Houston, and SMU and potentially consider BYU. This conference wouldn’t be as strong as a Big 12 with Oklahoma and Texas but it would be considerably stronger than the AAC or Mountain West, which gives them leverage in TV deals.

Whether any or all of those teams would move to the Big 12 is another question. Furthermore, the Big 12 would have to ensure remaining members are not spooked by OU and UT leaving and opt for greener pastures themselves. Any additional members leaving would put the Big 12 in an even weaker negotiating position for both TV rights deals and when attempting to attract new members. A future contract without OU and Texas will be bad enough but if TCU or Texas Tech felt the urge to leave as well, then it would be catastrophic.

Roadblocks to the SEC

There are some serious hurdles that both Oklahoma and Texas need to clear for these teams to actually move to the SEC. First, Oklahoma has to be worried about Oklahoma State and the state legislature. The current governor of Oklahoma is an OSU graduate and there’s been an emphasis on making sure that OSU is not left twisting in the wind like some neighbors to the south did to one another. How the two schools and legislature make this move work so that OSU also benefits is unclear.

Speaking of Texas, they have to worry about Texas A&M. The Aggies’ AD Ross Bjork is already on record crusading against the addition of Texas, which is hardly a surprise given the bitter ending those two schools had when Texas A&M left for the SEC. While that will be the biggest headline in Texas, let’s not forget that Baylor, TCU, and Texas Tech would all suffer from Texas leaving as well. The Longhorns are going to get a lot of political blowback on this potential move.

Then there’s the financial hurdle of leaving the Big 12 for Oklahoma and Texas. They would both have to pay back two years of revenue distribution as well as additional fees to the remaining institutions. However, they would likely be able to make any lost money up with higher expected revenues as members of the SEC. Nevertheless, financial consideration is always worth mentioning when leaving (or joining) a conference.

Even if OU and UT manage to clear those hurdles, they still need to get 11 of 14 yay votes on allowing them to join. Two definite no votes will be Texas A&M and Missouri but they would also need 2 additional no votes. Which schools would join them? Ole Miss? Mississippi State? Arkansas? That’s enough to prevent this move from happening though how the background politics play out might be wild enough to see OU and UT become SEC members.

With a blockbuster move like this, there’s little doubt that the other Power 5 conferences will feel the need to make some changes in an attempt to not get too far out of reach from the SEC. The ACC may try to lure Notre Dame to become a football-only member with a sweetened deal. The Big Ten and Pac-12 might try and steal away some of the other remaining Big 12 members. We know the Pac-12 leadership is already looking at the potential fallout from a move like this.

This will have a downstream impact as the Big 12 will likely want to fill the OU and UT void with AAC and Mountain West teams. In turn, those conferences will try and backfill from other Group of 5 conferences, which will have a domino effect on the FCS and possibly Division 2 teams. All it takes is one move and things can spiral out of control. Introduce a massive change like OU and UT to the SEC? Now we’re talking about a complete seismic shift that will have realignment effects lasting years.

Could This be a Smoke Screen?

The lack of denials from Oklahoma, Texas, and SEC Commissioner Greg Sankey are telling. There might be some truth to this report but it also makes us wonder… are OU and UT using this as leverage over the Big 12? Maybe it’s to get a higher share of the revenue pie. Perhaps it’s something different that they want the Big 12 to act on in terms of regulations or additional assurances. Could it possibly be that OU and UT want the Big 12 to add more members and give them a say in which teams get added?

Perhaps both OU and UT are testing the waters of multiple conferences to potentially join. For Texas, reports claim they have been planning to explore other conference options beyond the Big 12 after the rights deal expires in 2025. Given the current news cycle, it’s apparent the SEC was under consideration. There’s a lot of behind-the-scenes action that we simply don’t know and probably won’t until years down the road when the dust settles. It would make sense that OU and UT would join forces to get the best possible deal.

This could also be a leverage opportunity aimed at Fox Sports. The current TV deal runs through 2024-25 and both ESPN and Fox declined to partake in early negotiations for the next contract. The threat of going to the SEC (and ESPN/Disney) might be enough for Fox to up the ante with a higher offer. Fox could always call that bluff and hope 4 current SEC members are not willing to accept OU and Texas.

If Oklahoma and Texas moved to the SEC, it would be an incredible domino in college sports that would reverberate for decades. Still, this is just a single report, albeit one that has not been backed up by any sort of denial from the parties involved.

The biggest takeaway here isn’t OU, UT, or the SEC. It’s that the Big 12 appears to be teetering on the edge. Even if this report doesn’t come to fruition, the fact that the two biggest and most influential members want out is a terrible sign. It will look like an unhappy marriage for as long as OU, UT, and the Big 12 remain together but that doesn’t mean the current situation is unsalvageable.

While this was not an exhaustive list of all the undertones at work for this potential move, we hope it provided more insight into what it will take for Oklahoma and Texas to become SEC members. As always, we’ll be on the lookout for more information on this saga and others in the world of college sports realignment!