Clemson Survives On The Road Against Boston College 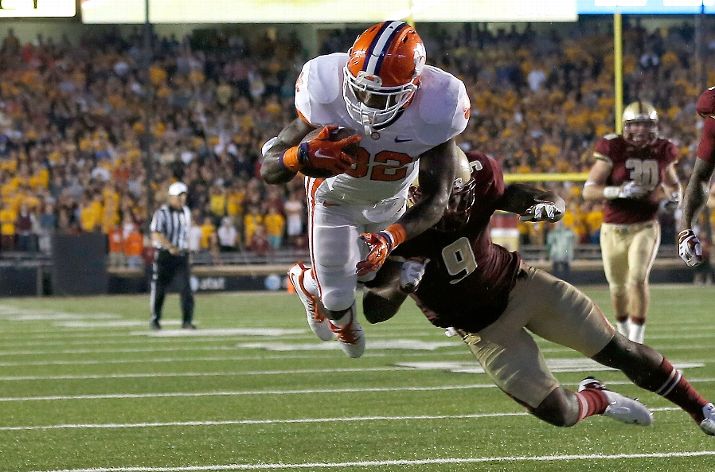 Clemson and Boston College played a defensive battle on Saturday that was not resolved until Tyler Murphy‘s pass fell incomplete near the goal line to give the Tigers the 17-13 win.

As one would expect with a low final score, this game did not feature much scoring, especially in the opening quarter. In fact, there was not a single point scored in the first 15 minutes and neither team had a play in the opposition’s half of the field.

The first points of the game came from Clemson. The Tigers started at midfield after a solid punt return of 13 yards by Adam Humphries. Cole Stoudt connected on passing plays of 19 and 15 yards to Mike Williams and Artavis Scott respectively to set up Wayne Gallman‘s 17 yard touchdown run.

It took a few drives for Boston College to answer that score, but they would midway through the second quarter. Tyler Murphy hit Sherman Alston for a 26 yard touchdown and the game was tied at 7 apiece.

The third quarter was similar to the first quarter. Neither team scored a point, but unlike the first 15 minutes, each team had plays inside their opponent’s 50 yard line. However, neither team was close enough to even attempt a field goal.

The fourth quarter saw plenty of action including an early touchdown from Murphy to Josh Bordner to take a 13-10 lead. However, the extra point was shanked to the right and BC only led 13-10.

Clemson answered immediately with a 32 yard burst from C.J. Davidson and his dive into the end zone to reclaim the lead at 17-13.

The Eagles would have one last chance with less than three and a half minutes remaining. The Eagles drove down to the Tigers’ 29 yard line and were faced with a fourth and one. They ran it with Jon Hillman who picked up 3 yards and the all important first down. However, the missed extra point loomed large just four plays later. Tyler Murphy went deep to the goal line but the ball was not on target and Clemson survived. Had it only been a three point deficit, the Eagles could have attempted a game-tying field goal. To be fair, it would not have been an automatic make from 48 yards because it was raining and the kicker had some trouble earlier in the game.

Cole Stoudt went 29 of 45 for 285 yards with no turnovers. He also ran for 21 yards on 8 carries. C.J. Davidson and Wayne Gallman both rushed for 39 yards for Clemson. The Tigers ran for 113 yards on 36 carries as a team for a subpar average of 3.1 yards-per-carry.

Tyler Murphy went 8 of 19 for 108 yards and 2 touchdowns. However, he was not nearly as effective with his feet as he normally is. He ran 13 times for a total of 55 yards to lead the Eagles. Charlie Callinan caught 3 passes for 64 yards while Dan Crimmins added one catch for 48 yards.

Clemson (5-2, 4-1) survived their second straight ACC contest after winning 23-17 last week against Louisville. Clemson returns home next Saturday for a game against Syracuse (3-4, 1-2).

Boston College (4-3, 1-2) will have an excellent chance to reach win number 5 next week when they travel to face Wake Forest (2-5, 0-3). The Demon Deacons have been thoroughly outplayed in their three ACC games to date.

A Review of the Recent College Sports Realignment News

A Review of the Recent College Sports Realignment News

Is the Atlantic Sun the Best Option for Central Arkansas?