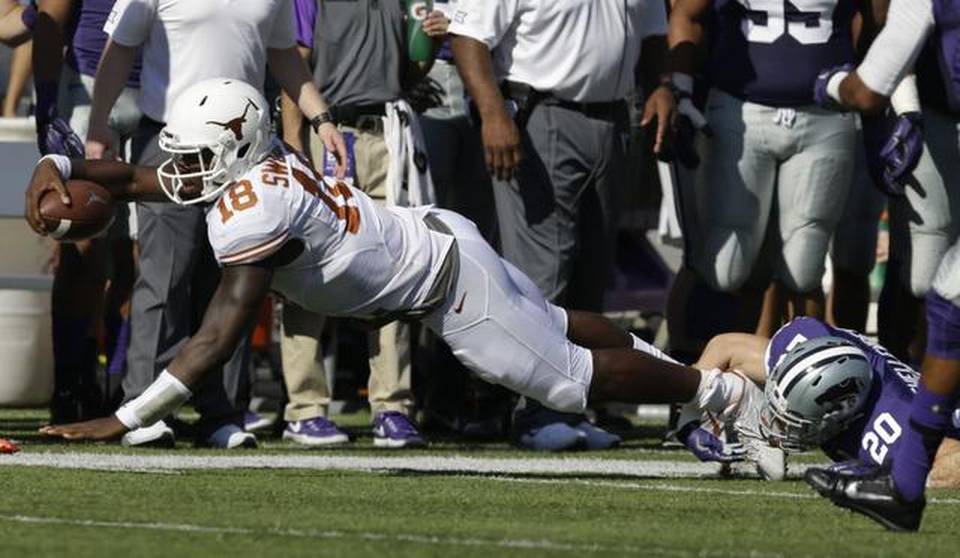 It was an ugly game between the Kansas State Wildcats and Texas Longhorns, but the Wildcats will not care as they won 23-0. It was Texas’ first shutout loss since 2004 when they were blanked 12-0 by Oklahoma. It was Kansas State’s first shut out since 2003 when they beat Iowa State 45-0 on November 8.

Texas began the game with two false start penalties on their first drive and ended up punting. The Wildcats had a first and goal from the Texas two yard line, but were unable to punch the ball in and settled for a 19 yard field goal from Matthew McCrane. McCrane added a second field goal on the next drive from 30 yards to make it 6-0 Wildcats.

Texas’ first series in the second quarter was their best chance to get points. They started at the Wildcats’ 40 yard line and quickly moved to the 16 yard line. However, a holding penalty and sack took them out of field goal range and they punted it away.

With less than three minutes to go, DeMarcus Robinson ran in from 3 yards out when he bounced to the outside after finding no room up the middle. That made it 13-0 and was more than enough on a day when Texas’ offense could not get anything going.

Kansas State was forced to punt on their first drive of the third quarter and Texas appeared to finally have some continuity on offense. They were at the Wildcats’ 43 yard line when D’Onta Foreman’s pitch to Jaxon Shipley on the reverse was fumbled and recovered by Valentino Coleman of K-State. The Wildcats settled for a field goal from 38 yards out, courtesy of McCrane, and a 16-0 lead.

The ensuing drive by Texas had the chance to get them back in the game. On fourth and one from the K-State 14 yard line, Johnathan Gray ran to the left and was called down for no gain. The call looked incredibly egregious, but it stood and the Wildcats would take over. They ended up going 86 yards in 10 plays with Charles Jones running in from a yard out to make it 23-0.

It was a long day for Tyrone Swoopes, who had looked excellent in the previous two games. He was 13 of 25 passing for 106 yards and was the leading rusher with 31 yards on 8 carries. Johnathan Gray had 10 carries for 24 yards while Malcolm Brown ran 6 times for 21 yards. Freshman D’Onta Freeman had 3 catches for 14 yards.

John Harris was the leading receiver with 3 catches for 42 yards while Jaxon Shipley had 4 catches for 25 yards.

Jake Waters went 19 of 30 for 224 yards and no turnovers. He ran 7 times for -1 yard, but that was due to a sore shoulder he suffered last week against Oklahoma. DeMarcus Robinson ran 16 times for 50 yards and a touchdown while Charles Jones had 13 carries for 49 yards and a score. Backup quarterback Joe Hubener had 5 runs for 46 yards late in the fourth quarter with the game well in hand.

Tyler Lockett was the leading receiver with 8 receptions for 103 yards. Deante Burton caught 4 passes for 55 yards and Curry Sexton had 4 catches for 36 yards.

Neither team was impressive, but Texas looked horrendous on offense. They finished with 196 yards of total offense while Kansas State had 367 yards. There was little continuity for Texas and never got in rhythm.

Texas (3-5, 2-3) needs to win three of their last four games to reach bowl eligibility. They face Texas Tech next week on the road before playing West Virginia (11/8), going to Oklahoma State (11/15), and facing TCU at home on Thanksgiving (11/27). Texas is facing the stark reality of not playing in a bowl game for the first time since 2010.

Kansas State (6-1, 4-0) continues to make their case for a possible spot in the playoffs. However, they have plenty of hurdles left in TCU, West Virginia, and Baylor all on the road before they should even begin to think about that. They have another home game next week against Oklahoma State on Saturday.