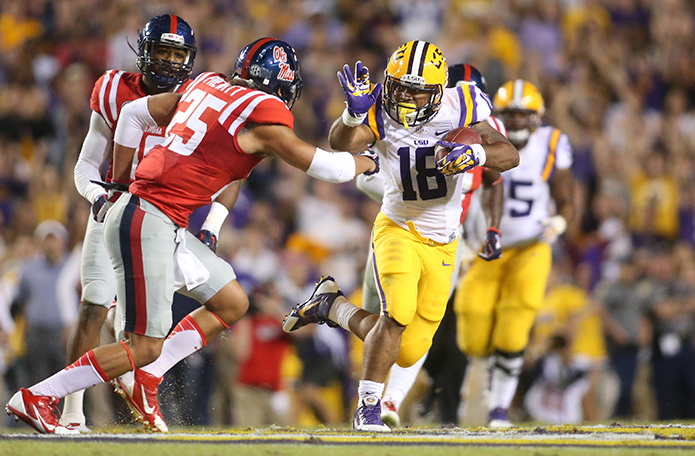 Bo Wallace‘s interception at the LSU two-yard line with two seconds left broke the hears of Mississippi fans, but it may call into question the decision by head coach Hugh Freeze to go for extra yards instead of trying a 47 yard field goal. The interception preserved a 10-7 LSU victory.

LSU was moving the ball to start the second quarter, by Prewitt forced a fumble on Terrance Magee catch and run. However, the Rebels would not capitalize on the turnover and LSU would hit a field goal on their next drive to make it 7-3. That would be the score after the first 30 minutes as both offense struggled to move into the opponent’s red zone.

The third quarter featured more of the same with both offense struggling to get past midfield or deep into each other’s territory. Anthony Jennings threw an interception at the Ole Miss 49 yard line, but nothing would come of it.

Jennings threw another interception early in the fourth quarter, but the LSU defense came up big once more by forcing another punt. Following the punt, LSU would embark on a 13 play, 95 yard drive. On second and goal from the Ole Miss 3, Jennings hit Logan Stokes for a touchdown and a 10-7 lead for LSU.

Following the touchdown, Ole Miss was faced with a fourth and one on the LSU 47 yard line, but Wallace was stopped cold for no gain and LSU took over at that spot. The Ole Miss defense stopped the Tigers on the following three plays, but had to burn all of their timeouts.

The Rebels had one last chance with 1:19 left on the clock. On fourth and 8 from their own 27, Wallace hit Markell Pack for 12 yards on a check down to keep the game alive. LSU’s Jalen Mills was called for pass interference to give the Rebels the ball at the LSU 33 yard line. On third and 2 at the LSU 25 yard line, Hugh Freeze put the kicking team on the field, but a delay of game penalty backed them up.

After an LSU timeout, Freeze put the offense on the field and decided to try and pick up more yards for a better field goal. Wallace tried to go for the end zone, but the ball was underthrown and Ronald Martin was there to intercept the ball and win the game for LSU.

Overall, Bo Wallace had a rough night. He went 14 of 33 for 176 yards with a touchdown and an interception while also running for 40 yards on 12 carries to lead the Rebels. Laquon Treadwell caught 4 passes for 71 yards, Cody Core had 4 catches for 45 yards and a touchdown, and Jaylen Walton caught 4 passes for 41 yards.

Anthony Jennings also had a rough night going 8 of 16 for 142 yards with a touchdown and two interceptions. Leonard Fournette ran 23 times for 113 yards while Terrance Magee had 74 yards on 12 carries. Kenny Hilliard ran 12 times for 63 yards.

Magee also caught 2 passes for 45 yards to lead the Tigers in receiving. Trey Quinn had two catches for 42 yards and Fournette also had 2 catches for 41 yards.