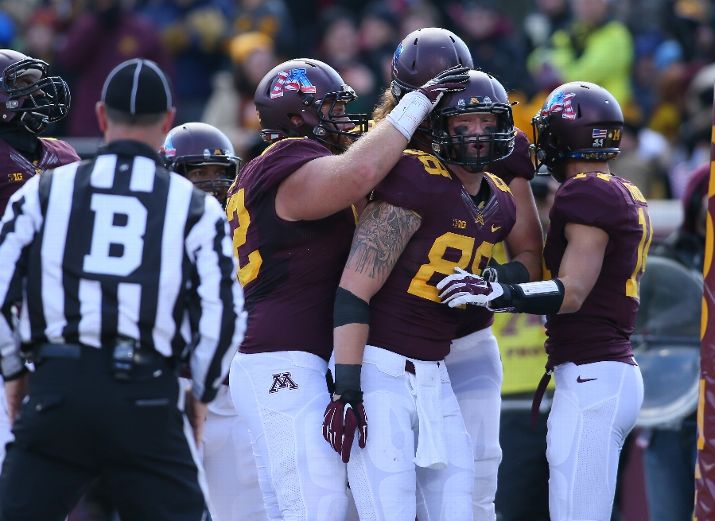 Iowa scored the first seven points and the final seven points, but that was all they could muster as Minnesota scored the 51 points in between Iowa’s two scores to win 51-14. Mitch Leidner had 4 passing touchdowns, with three to Maxx Williams, to lead the Gophers.

Iowa opened with a very strong drive. They pounded the ball three straight times at the goal line with Mark Weisman getting the final two carries. Weisman got in on his second attempt to make it 7-0. However, it was all downhill after that.

The Gophers responded with an excellent drive of their own as KJ Maye ran in from 9 yards out on the jet sweep, a play Minnesota as they pleased against Iowa. Minnesota would intercept Jake Rudock’s pass on the next play, but failed to get any points off of it.

After a three and out by Minnesota, Iowa saw their drive stall at their 30 yard line. Their ensuing punt was partially blocked by Eric Murray and went for only 14 yards. Leidner opened up his passing touchdown account with a 44 yard bomb to Donovahn Jones on the next play to make it 14-7 Minnesota.

Another punt for Iowa resulted in another Leidner touchdown pass, this one to Maxx Williams from 9 yards out. It got worse as Rudock fumbled on the first play of Iowa’s next drive. That resulted in David Cobb’s 6 yard touchdown run and the lead was at 28-7.

After a punt, Williams caught his second of the day before the Gophers were given another gift on Akrum Wadley’s fumble. However, Ryan Santoso’s 45 yard field goal was no good, but the damage was already done. Minnesota led 35-7 at the break.

The opening second half drive for Minnesota resulted in a similar result: Leidner to Williams. Minnesota added a Rodrick Williams touchdown and a 35 yard field goal from Santoso to make it 51-7. Iowa scored a touchdown with 14 seconds left when C.J. Beathard hit Andrew Stone for a 24 yard score.

Damon Bullock was the top receiver with 4 catches for 41 yards out of the backfield. Tevaun Smith caught 3 passes for 38 yards.

Unsurprisingly, Maxx Williams was the top receiver with 5 catches for 46 yards and 3 touchdowns. Donovahn Jones had 1 catch for 44 yards with one touchdown.

Iowa (6-3, 3-2) is not quite out of Big Ten West race with the loss. They have a potentially tricky road game next week at Illinois (4-5, 1-4). Iowa also has home games against Wisconsin and Nebraska to close out the season.