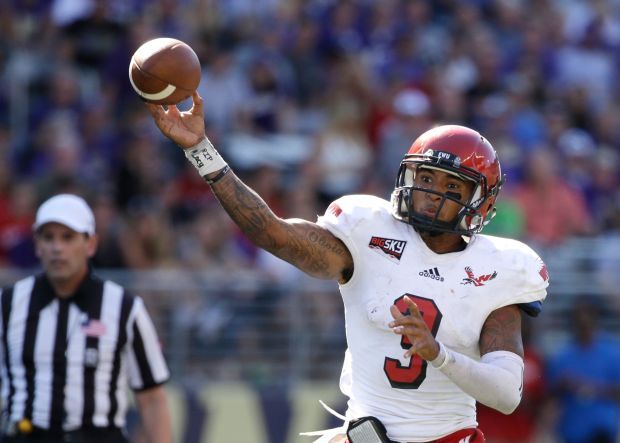 Eight games were played last week in the first round of the 2014 FCS Playoffs and eight more will be played in the second round this Saturday. Last week produced a 5-3 record based on the predictions of round one by missing Sam Houston State, Liberty, and South Dakota State. Here are the 2014 FCS Playoffs Round 2 Predictions.

As expected, Fordham took care of Sacred Heart in the first round and get the top seeded New Hampshire Wildcats in the second round. The Wildcats only loss was to Toledo 54-20, a MAC team that will go bowling at season’s end. The defense has been very good for New Hampshire and they will be tested by Mike Nebrich’s passing attack. Fordham faced another Colonial football team in Villanova during week two and got pasted 50-6. New Hampshire shuts down Fordham to win 27-10 and moves on to the quarterfinals.

Indiana State was impressive in their comeback win in round one at Eastern Kentucky. They were 16 points down and scored the final 36 points to win 36-16. Now they face the high-powered Chattanooga team that had losses to Central Michigan (20-16), Jacksonville State (26-23 in OT), and Tennessee (45-10). In the 9 wins for the Mocs, they have scored at least 31 points. That streak continues, but Indiana State certainly can make it close. Chattanooga wins 35-27 and moves on to play in the quarterfinals.

This game is a rematch of November 1’s game that saw Northern Iowa win 42-28 at home over Illinois State. Now the Redbirds are at home where they went 7-0 including a win over South Dakota State. In the November 1 game, Northern Iowa scored two special teams touchdowns and had a pick six with 50 seconds left to seal the win. It is hard to imagine the Redbirds imploding like that again this weekend. Illinois State wins 41-31.

This game is yet another rematch of a regular season game. Eastern Washington, at home, beat Montana 36-26 in an air raid between the two teams. This Saturday has a chance for snow in the morning, but the weather is expected to be fine by game time. This should be another shootout between quarterbacks with Vernon Adams and Jordan Johnson slinging the ball around as they please. Eastern Washington’s losses were to Washington (59-52) and Northern Arizona (28-27). Eastern Washington wins a thriller 52-48.

Liberty shocked James Madison last week in the opening round. They face Villanova in the second round and this is where their season ends. Villanova has two losses this year, both by a single point. They lost a hear-breaker to Syracuse in double overtime 27-26 and 10-9 to Richmond, a fellow FCS playoff team. Villanova will be too much on offense and defense on their way to a 41-3 victory.

Richmond dispatched Morgan State with ease in the opening round while Coastal Carolina’s resume was boosted by the fact that Liberty, who beat them in the regular season finale, came back to beat James Madison in the first round. It is worth noting that Richmond beat Liberty earlier the season 46-39 in double overtime. Both teams can score or play defense, though the former seems more likely in round two. In a close game, Coastal Carolina pulls out the 45-42 win.

These two teams played on November 1 will North Dakota State using a big second half to win 37-17 over South Dakota State. The Bison trailed 10-6 at the halftime, but their rushing attack came alive and they were able to move the ball with ease in the final 30 minutes. Also in that game, Zach Zenner had 96 yards and a touchdown on 17 carries for the Jackrabbits. This should be a very good game, but the Bison hang on for the 28-21 win and move on to the quarterfinals to continue their defense of three straight FCS Championships.

Based on the predictions above, the quarterfinals would look as follows: