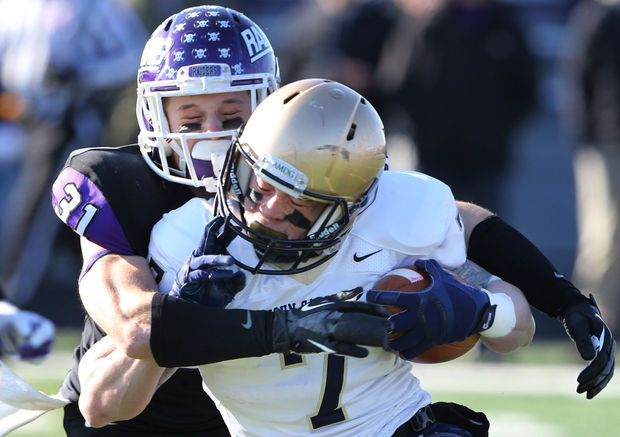 The 2014 NCAA Division 3 Football playoffs are down to 8 teams and that will be halved by early Saturday evening. The first round was a rousing success with yours truly going 16-0. A drop was expected in the second round as the teams are far more even and that came true. The second round predictions went 5-3 here at Sports Enthusiasts. Now, we have four games and it does not get much easier than it was in the second round.

Wartburg has opened the playoffs with back-to-back wins at home against teams from Minnesota. First it was St. Thomas 37-31 and then it was St. John’s 21-10 last week. Meanwhile, Wisconsin-Whitewater has crushed their opponents 93-16 in the first two games. The Warhawks did have the announcement that their head coach Lance Leipold will be going to the University of Buffalo… After the playoffs. Leipold wants to finish what he started – a championship winning season. The Warhawks defense shuts down Wartburg in a 31-3 win to move on to the semifinals.

Linfield is playing inspired football after the death of one of their players. They went on the road and beat Mary Hardin-Baylor 31-28, but now they have a new challenge. They must go across the country to Pennsylvania to face Widener at 12 PM Eastern Time or 9 PM Pacific Time. This game has the feel of a shootout as Linfield has averaged 43 points in their two games during the playoffs and Widener has averaged 36.5 points in the playoffs. It will go down to the wire again, but Linfield continues to find a way to win. Linfield takes the game and moves on to the semifinals with a 41-38 win.

With no disrespect to the other three games, this is THE game of the weekend in the quarterfinals. The regular season finale between these two teams was a thriller and featured a controversial finish in Mount Union’s 31-24 win. On second and goal from the Mount Union 7 yard line, John Carroll was unable to spike the ball to stop the clock. Per NCAA rules, a team cannot spike the ball with less than three (3) seconds on the clock and JCU snapped it with two seconds.

Also in that game, John Carroll 21-0 in the second quarter and 24-7 at halftime. They came back to tie the game at 24, but the Purple Raiders scored the eventual game winning touchdown with 1:12 left in the game. That led JCU to the Mount Union 7 yard line and the controversial finish stated above.

This game should be every bit as good especially with JCU having the benefit of playing Mount Union in a tight game to the end. Yes, Mount Union has out-scored their opponents 130-3 in the first two rounds of the playoffs while John Carroll barely beat Wheaton (IL) last week 14-12. Still, this game ought to be close. And the result will probably be the same. Mount Union holds on for a 34-31 to play in the semifinals.

Based on the four games above the two semifinal games would be as follows:

What a duo of Division 3 National Semifinals that would be. Be sure to check back on Saturday evening for a roundup of all the action from the quarterfinals.