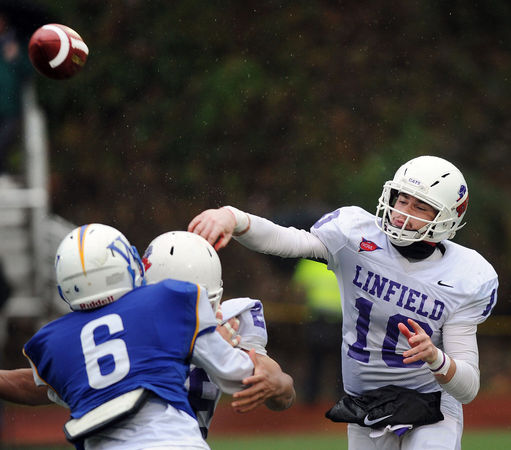 The penultimate playoff week in the 2014 Division 3 football season occurs this Saturday with the semifinals. By the conclusion of the games on Saturday evening we will know whether or not we will see yet another Mount Union and Wisconsin-Whitewater Stagg Bowl. In Division 3 football you have to beat the champs in order to be the champs. This is a great opportunity for both Linfield and Wesley.

In round one, we went a perfect 16-0 in predicting the Division 3 football playoffs. Round two saw a regression to 5-3 while the Quarterfinals produced a 4-0 record. You can find the predictions of round 1 here, round 2 here, and the quarterfinals here. Let’s hope the pattern of up and down does not continue and we go 2-0. Here are the 2014 Division 3 Football Semifinals Predictions.

Top seeds in their respective quadrant, Wesley and Mount Union both have excellent offenses. Last year produced an unbelievable 62-59 game that Mount Union won after leading 31-0 in the first quarter. While this game probably is not going to produce nearly as many points, this game should be just as exciting. Wesley has waited a year for a chance to beat Mount Union and the Purple Raiders will be ready. In an exciting battle, Wesley’s offense gets the job done in a 34-31 upset of Mount Union.

Linfield is on a mission this year and they have been impressive in their three games. They crushed Chapman at home 55-24 and then beat Mary Hardin-Baylor on the road 31-28. Last week’s game was quite impressive with a 45-7 road victory over Widener in Pennsylvania with an early start time. Meanwhile, Whitewater looked far from impressive last week when they fell behind 33-14 to Wartburg. To their credit, they did rally to score 21 fourth quarter points to get the win. However, if the Warhawks have a repeat of last week’s game they will not be so lucky against Linfield. Right now, Linfield is too hot to ignore and they will pull the upset 31-27 over Whitewater.

If you skipped to this part without reading the two paragraphs above, the 2014 Stagg Bowl is predicted as being Linfield taking on Wesley. It may be hard to imagine there being a year without Mount Union or Whitewater in the Stagg Bowl this could be it. Then again, maybe these predictions are completely wrong and it will be Mount Union and Whitewater for the 9th time in 10 years.

Check back here on Saturday for a recap of the two semifinal games.