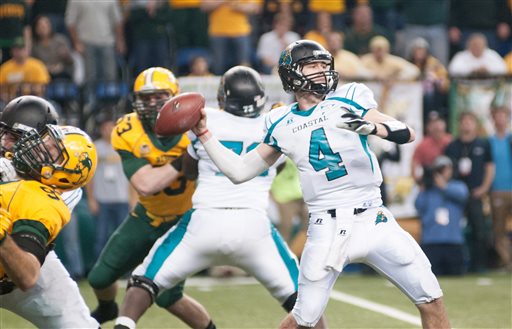 By the end of the games on Saturday there will be only 4 teams standing after the conclusion of the Quarterfinal matchups. Round 1 provided a record of 5-3 and those predictions can be found here. The Second round was much better with an 8-0 record and those picks can be found here. Let’s see if we can make it 4-0 this weekend with the 2014 FCS Playoffs Quarterfinals Predictions.

Chattanooga looked solid last week against Indiana State, but there are some glaring issues they need to address if they are to win. They struggled in the red zone especially with a chance to put the Sycamores away. They cannot have a repeat and expect to win against New Hampshire. The Wildcats did an excellent job of holding the Fordham passing attack to 161 yards last week. This has the feel of a shootout with New Hampshire coming out on top 42-31.

Both teams looked good in their second round matchups last week at home. Illinois State took care of fellow Missouri Valley Football Conference foe Northern Iowa while Eastern Washington held Montana in check. This game figures to be even both on paper and on the field. As mentioned last week, EWU has only two losses with both coming on the road. ISU has one loss to Northern Iowa on the road, but were also tested in two others. Let’s go wtih Eastern Washington at home by a field goal, 41-38 though it would not be surprising to see Illinois State come out with the win.

Sam Houston State has been impressive during their 7 game win streak including last week’s victory over the third seeded Jacksonville State Gamecocks. Their defense has been very good, especially in the second half of both playoff games. Villanova struggled with a better than expected Liberty team last week and needed a fourth quarter touchdown to win. This game figures to be close and we will go with Sam Houston State to win a third straight road playoff 27-24.

This game has some revenge factor in it. In 2013, Coastal Carolina went into the FargoDome and got smashed by North Dakota State 48-14 in the Quarterfinals. The Chanticleers are back in 2014 in the Quarterfinals once more. The good news for Coastal Carolina is that the Bison do not look as dominant as they have in the past three years, but the Bison are still the three-time defending FCS Champions and are at home. NDSU needed a late touchdown last week to beat South Dakota State, but they showed the mettle of a champion in doing so. This game will not be a 34 point blowout, but it is hard to pick against NDSU at home in the playoffs. The Bison hang on for another week 24-21.

Based on the outcomes predicted above the semifinal games would be as follows:

Be sure to check back this weekend for the wrap up of the four quarterfinal games.