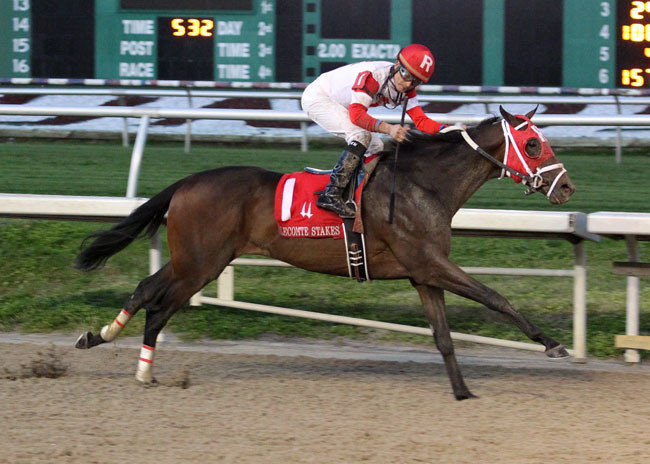 For most of the race, International Star was able to save ground, but trouble forced him to the outside. That was of little consequence as he went to the outside and stormed past the two leaders to win by 2 1/2 lengths in the end. The Lecomte was his first win on dirt.

The race began with a sharp break from Hero of Humor as he went to the lead. Right behind him was Tiznow R J with Another Lemon Drop three lengths off the lead in third. Runhappy was fourth in the very early stages after a bit of a slow break with International Star, War Story, and Four Leaf Chief behind him. The last four horses were Eagle, Savoy Stomp, Dekabrist, and Killingit.

The race changed quickly with Runhappy tugging his way to the lead while racing greenly. He led until the far turn where he began to falter. The lead was contested by a trio of horses; Hero of Humor, Tiznow R J, and Another Lemon Drop. However, there was another trio of horses behind them that were in contention. Those three were International Star, Eagle, and Savoy Stomp.

In the stretch, the duo of War Story and Tiznow R J pulled clear from the main group, but International Star a length behind. With a furlong to run, he made his outside move to the lead and pulled clear to win by 2 1/2 lengths. The battle for second was won by War Story finishing a head in front of Tiznow R J. Another Lemon Drop finished fourth by 5 lengths.

The final order of finish behind the top four was Savoy Stomp, Hero of Humor, Eagle, Dekabrist, Runhappy, Killingit, and Four Leaf Chief.

International Star is by Fusaichi Pegasus out of the French Deputy mare Parlez.

With the victory International Star moves into a tie for first place on the Kentucky Derby Leaderboard at 21 points with El Kabeir. War Story claimed his first 4 points, Tiznow R J has 2 points, and Another Lemon Drop has 1 point.

The next race on the Road to the Kentucky Derby is Monday, January 19 with the Smart Jones Stakes at Oaklawn Park.