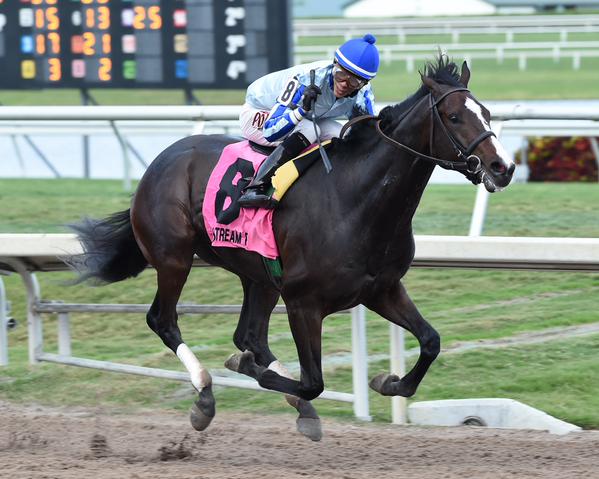 Upstart crushed the 8 horses who raced against him and emphatically put his name on the list of top Kentucky Derby contenders. Upstart, ridden by Jose Ortiz, won by 5 1/2 lengths after drawing away in the stretch.

Even before the race, the complexion change slightly with the decision by the connections of Dom The Bomb to run in the Hutcheson Stakes in race 7. He was seen as a pace threat if he were to have run in this race, but instead he finished last in the Hutcheson after pressing the pace.

The Holy Bull began with Bluegrass Singer breaking well and taking the lead from the start. First Down was a length behind him and Upstart sat off his flank. Behind the trio were Decision Day, Frosted, and Juan and Bina. The trailing trio consisted of Keen Ice, High Noon Rider, and Frammento.

Bluegrass Singer continued to lead the field as they marched down the backstretch and on the far turn as well. Upstart moved up to second on the backstretch and continued his charge on the turn with First Down battling in third though he was struggling to keep up. Frosted was in fourth, Juan and Bina was in fifth position on the far turn, and Keen Ice was sixth. Frammento moved up to seventh, High Noon Rider was eighth, and Decision Day fell all the way back to last.

After being forced to go 4 wide on the turn and entering the stretch, Upstart took over the lead and pulled clear to win by 5 1/2 lengths. Frosted was no match for Upstart, but still was able to grab second over Bluegrass Singer who finished 7 3/4 lengths behind the winner. Juan and Bina finished fourth by 9 1/2 lengths.

The final order of finish beyond the top four was Keen Ice, Frammento, First Down, Decision Day, and High Noon Rider. High Noon Rider did not finish the race, as he was pulled up and walked off.

Frosted earned 4 points for the second place finish to give him 8 points while Bluegrass Singer and Juan and Bina both earned their first points of the Road to the Kentucky Derby.

The Road to the Kentucky Derby takes a week off before returning on Saturday, February 7 with the Withers Stakes at Aqueduct and the Robert B. Lewis at Santa Anita.