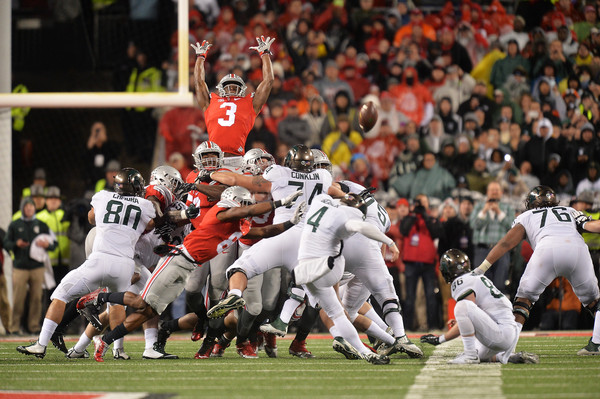 The Big Ten had six conference games and one non-conference game in week 12. Once again, a team from Michigan was in the spotlight with Michigan State at Ohio State. Each game is looked at below.

Iowa got out to a big early lead and then kept the pesky Purdue Boilermakers at bay to keep their perfect season intact. The Hawkeyes also formally clinched the Big Ten West Division to reserve their spot in the Big Ten Championship Game against a yet to be determined team from the East division.

Purdue’s Austin Appleby had a solid game going 23 of 40 for 259 yards and a touchdown in relief after an injury to David Blough. Markell Jones ran for 87 yards and a touchdown on 24 carries. DeAngelo Yancey led Purdue with 9 catches for 117 yards while Domonique Young had 4 grabs for 52 yards. Purdue did manage to put up 405 yards of offense thanks to playing from behind for the entire game. They went 4 of 18 on third down, but a solid 5 of 8 on fourth down.

Purdue (2-9, 1-6) will finish their season at home against Indiana battling for the Old Oaken Bucket. Iowa (11-0, 7-0) faces Nebraska on the road on Black Friday.

Michigan had a consistent effort on the road to defeat Penn State and keep their hopes of a Big Ten East title alive.

Penn State struggled on offense and also struggled putting the ball in the end zone. Christian Hackenberg went 13 of 31 for 137 yards and a touchdown, but struggled mightily with accuracy. Saquon Barkley ran for 68 yards on 15 carries while also having 2 grabs for 19 yards. Chris Godwin led Penn State with 3 catches for 51 yards while Saeed Blacknall had a 25 yard touchdown catch in his only reception of the game. Penn State settled for 3 field goals in the red zone and only had 207 yards of offense. They went 3 of 14 on third down and 1 of 2 on fourth down.

Penn State (7-4, 4-3) will be on the road against Michigan State with a chance to ruin the Spartans Big Ten title hopes with a win.

Rutgers was playing in the only non-conference game of the week and took care of Army on the road.

Chris Laviano went 13 of 21 for 105 yards with no touchdowns or picks. The rushing attack was excellent for Rutgers with Paul James leading the way. He had 116 yards and 3 touchdowns on 18 carries while Robert Martin had 99 yards and a touchdown on 17 carries. Janarion Grant had only 2 carries, but managed to run for 40 yards. Grant also had 3 catches for 31 yards while Leonte Carroo had 4 catches for 37 yards. Rutgers had 395 yards of offense, but struggled on third down going 3 of 10. They did managed to convert both of their fourth down attempts.

Rutgers defense struggled to stop the run, but that is expected against Army who runs the triple option. They allowed 261 yards on 52 attempts, but were burned on the six passing attempts by Army. Army went 4 of 6 passing for 140 yards with a touchdown and a pick. Edgar Poe had 2 catches for 95 yards and a touchdown. Army also converted 9 of 13 on third down and 1 of 2 on fourth down. Rutgers gave up 401 yards of offense to Army.

Rutgers (4-7, 1-6) finishes their season next Saturday with Maryland coming to town.

Indiana had big second and third quarters to propel them to a 47-28 win over Maryland and leave them one game from bowl eligibility going into the regular season finale. Indiana put up 37 points in the middle two quarters compared to just 7 for Maryland during the same time frame.

Nate Sudfeld had a big game going 23 of 35 for 385 yards and 4 touchdowns. He did not throw an interception and also ran for a touchdown. Devine Redding stepped up to rush for 130 yards on 24 carries after an injury knocked Jordan Howard out of the game early in the contest. Simmie Cobbs easily led the team and entire game with 9 catches for 192 yards. Andre Booker caught 2 passes for 79 yards and a touchdown while Mitchell Paige had 5 catches for 64 yards and 2 touchdowns. Indiana racked up 555 yards, but struggled on third down going just 4 of 14.

Maryland could not find any rhythm in the passing game between Caleb Rowe and Shane Cockerille. Rowe left the game in the second quarter after a concussion. Rowe finished 10 of 19 for 88 yards with a touchdown while also rushing for 27 yards on 4 carries. Cockerille went 10 of 21 for 87 yards while also rushing for 23 yards on 13 carries. Brandon Ross had a massive game rushing going for 250 yards and 3 touchdowns on the ground for the best game of 2015 and his career. Levern Jacobs led Maryland with 4 catches for 50 yards. The Terps went 3 of 16 on third down and also went 2 of 6 on fourth down.

A defensive battle between Northwestern and Wisconsin saw a tight finish in a controversial game. The Badgers had a punt return touchdown called back due to an illegal fair catch and also had a touchdown overturned in the final minute.

Northwestern’s Clayton Thorson was largely ineffective going 9 of 20 for only 60 yards. Justin Jackson was the workhorse for the Wildcats with 35 carries for 139 yards and a touchdown. Garrett Dickerson had 2 catches for 24 yards as the Wildcats leading receiver. Northwestern finished with 209 yards of offense and went 7 of 20 on third down.

Wisconsin was led by Joel Stave going for 229 yards on 20 of 34 passing. He also threw 2 interceptions and also lost a fumble. He missed the final play of the game for Wisconsin as he took a sack with the Badgers on the 1 yard line of Northwestern and left due to concussion like symptoms. The Badgers were completely ineffective running the ball. Corey Clement went for 24 yards and a touchdown on 10 carries, but the Badgers finished with NEGATIVE 26 yards rushing due to Stave taking so many sacks.

Jazz Peavy had 5 catches for 88 yards, but his touchdown catch in the final minute was overturned because he did not complete the process of a catch. Tanner McEvoy had 5 catches for 57 yards, but lost a fumble on one of those catches. Wisconsin finished with only 203 yards of offense, had 5 turnovers, and went a poor 2 of 13 on third down.

Northwestern (9-2, 5-2) faces Illinois at home on Saturday with a chance to get their second 10 win season under Pat Fitzgerald (2012). Wisconsin (8-3, 5-2) faces Minnesota on the road next week with a chance of winning 10 games for fifth time in the last 7 seasons. A win over Minnesota and their bowl opponent will get them to the 10 win mark.

The game of the day for the Big Ten belonged to Michigan State and Ohio State. The Spartans won by a field goal despite not having quarterback Connor Cook.

Tyler O’Connor got the start in place of Cook and went 7 of 12 for 89 yards and a touchdown. Gerald Holmes ran for 65 yards and a touchdown on 14 carries while LJ Scott had 13 carries for 58 yards. The Spartans relied heavily on their rushing attack to the tune of 203 yards on 51 carries. Aaron Burbridge led the team with 4 catches for 62 yards while four others recorded a reception. Trevon Pendleton had the lone touchdown reception for the Spartans as they finished with 294 yards on offense and went 7 of 15 on third down.

Michigan State (10-1, 6-1) controls their destiny in the Big Ten East. They face Penn State at home on Saturday and a win would put them in the Big Ten Championship Game against Iowa.

Ohio State (10-1, 6-1) will face Michigan on the road next week. They need a win over Michigan and a loss by Michigan State to play in the Big Ten Championship Game.

The battle for two bowl hopefuls ended with Minnesota coming out on top as both teams now sit at 5-6 on the season.

Wes Lunt went 34 of 47 for 279 yards with 2 touchdowns and an interception for Illinois. Josh Ferguson led the Illini in rushing with 105 yards on 20 carries while Kendrick Foster got his most significant playing time to post 56 yards rushing on 11 carries. Malik Turner led the team with 11 catches for 126 yards and a touchdown. Illinois finished with 433 yards of offense and went 8 of 17 on third down, but also committed 3 turnovers.

Mitch Leidner did not have anywhere near the same passing efficiency in his past four games, but that did not hurt the Gophers. He finished 15 of 25 for 88 yards and a touchdown while also rushing for 64 yards on 10 carries. Shannon Brooks ran wild all game with 174 yards and 3 touchdowns on 17 carries. KJ Maye had a quiet game going for 31 yards on 4 catches while Drew Wolitarsky had 2 catches for 26 yards and Brandon Lingen had 3 catches for 20 yards. Minnesota put up 343 yards of offense while going 7 of 13 on third down.

Check back next Sunday for a roundup of the Big Ten’s final full week of the regular season.