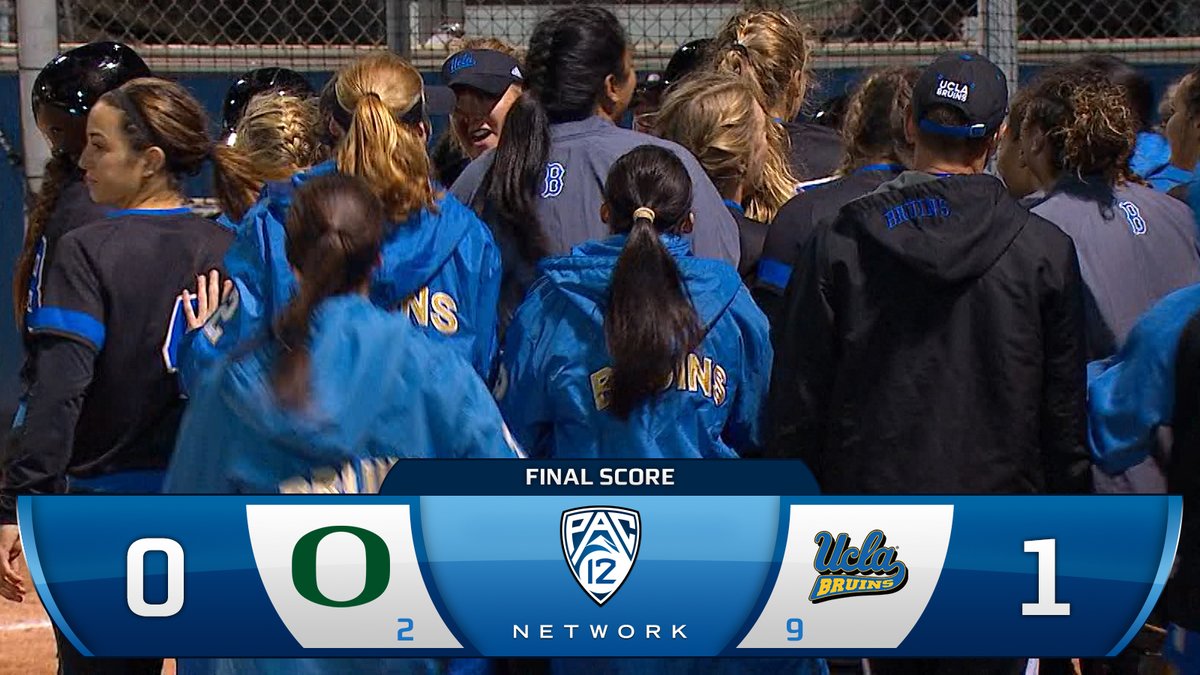 The fifth edition of our power rankings for the 2017 season sees movement all over the board. The headliner was previously undefeated Oregon dropping not just their first game of the season, but also their second. Below we list the top 16 teams along with the next four teams.

We will start by providing last week’s rankings below. Please note the table below is based on records as of April 4.

Below is the fifth edition of our 2017 power rankings. Please note the records listed are through games as of April 11.

Florida (#1 last week) went 4-0 with a win over North Florida and sweep of rival Georgia. The Gators allowed just two runs over the four games as all three Gator pitchers, Aleshia Ocasio, Delanie Gourley, and Kelly Barnhill, won during the week. Barnhill threw two complete-game shutouts with 21 strikeouts against Georgia. All three pitchers boast ERAs under 0.85 and rank in the top 10 in the NCAA. The Gators face Florida State at home on Wednesday and then travel to play Kentucky over the weekend.

Arizona (#3 last week) had an easy week of working sweeping Stanford. All three games were over by the fifth inning as the Wildcats outscored the Cardinal 41-2 over the series. Arizona hit 7 home runs in the first game, 4 the second game, and 4 in the third game. Both Katiyana Mauga and Mo Mercado homered in each game. Arizona will be playing at Utah over the weekend in a three-game series followed by a Tuesday doubleheader at New Mexico State.

The Seminoles (#2 last week) went on the road and swept Syracuse, but not in their usual dominant pitching fashion. They gave up 18 runs to Syracuse after giving up a total of 17 runs in the previous 19 games coming into the series. The ‘Noles won 18-9, 13-4, and 6-5 with the last requiring a late rally to get the victory.

Florida State has a massive midweek game at Florida before playing two games at South Carolina. The week ends with FSU playing a doubleheader at Troy on Tuesday.

Texas A&M (#6 last week) had a foray outside the SEC and won all four games comfortably. Midweek, they defeated McNeese State 10-3 and then swept former Big 12 foe Oklahoma State by at least seven runs in each game. None of the Aggie pitchers allowed more than five hits and the final game was a one-hitter (5 walks) by still undefeated Lexi Smith (10-0). Texas A&M will face a pesky Arkansas squad on the road over the weekend.

For the second week in a row, UCLA (#10 last week) had an excellent series victory over a very good Pac-12 squad. This series victory was a bit bigger and more impressive given their bats were not effective. UCLA defeated Oregon 2-0 and 1-0 (9 innings) in the first two games. They allowed five hits apiece in those games, but the Ducks could not breakthrough. Rachel Garcia won both decisions with the latter in a relief appearance. Oregon crushed the Bruins 11-4 in the final game, but the impression was already made by UCLA.

Imagine this UCLA team with stellar hitting AND pitching. The issue has been getting those in sync at the same time, but the Bruins loom a threat over the next two months if they those together. They play at Oregon State over the weekend and host Cal State Fullerton on Tuesday.

Oregon (#4 last week) could not find timely hitting in the first two games against UCLA (see above) as they lost the series two games to one. The bats awakened in the third game 11-4 crushing of the Bruins, but the damage was done. This series showed how best to beat Oregon: dominant pitching and making the most of opportunities. That is a lot easier said than done, but there are teams across the country that pose those threats.

Oregon has another tough series on the horizon as they welcome Washington to Eugene over the weekend.

Auburn (#5 last week) won two of three against Ole Miss over the weekend with both victories coming by the same score of 3-1. Kaylee Carlson recorded both wins to improve to 20-1 as she allowed 10 hits against 13 strikeouts and no walks. The loss was a 10-4 clunker despite 13 hits from the Tigers. Auburn will face Georgia State on Wednesday followed by a weekend home series against Missouri.

Oklahoma (#7 last week) went 4-0 after defeating Arkansas and Texas. The first three games of the week were all within two runs as Mariah Lopez won two games while Paige Parker and  Paige Lowary won the other two contests. Oklahoma is rolling at 12 wins a row and will be at Kansas over the weekend and away to North Texas on Tuesday.

Minnesota (#8 last week) went 3-0 after a sweep of Indiana at home. Sara Groenewegen won the first two games while Amber Fiser won the final game in a two-hit performance. Sydney Dwyer recorded 7 RBIs while Danielle Parlich and Kendyl Lindaman both had 3 RBIs. Minnesota finishes their 8 game homestand to Northwestern over the weekend.

Utah played only two games but won both versus California. The third game on Sunday was canceled after an overnight snowstorm. The Utes won 7-6 on Friday after blowing a 6-1 lead and then reclaiming it to win on Heather Bowen’s double in the sixth inning. The second game saw Utah take another big lead, but they never were close to surrendering it. Kelly Martinez hit a walk-off grand slam to end the game in five innings and give her 5 RBIs on the day. Utah has a tough home series against Arizona over the weekend.

Baylor (#11 last week) swept Iowa State at home. Sydney Christensen recorded 4 RBIs in the series as Jessie Scroggins, Kyla Walker, and Ari Hawkins all recorded an RBI in two of the three games. Baylor plays a tricky Texas State team on Wednesday and then come back home to play Houston on Tuesday.

Alabama (#12 last week) enjoyed a nice series victory over rival LSU as well as a 5-0 midweek win over Lipscomb. Alexis Osorio pitched a complete game two-hitter on Friday giving up six walks and striking out 11. She was not as dominant on Sunday giving up two runs on four walks and five hits, but she got the win. The loss was a 1-0 duel where the Tide only managed three hits. The Tide ended the week with an 8-0 win over UAB with Madi Moore throwing a three-hitter. Alabama will face a surging Tennessee team on the road over the weekend.

Louisiana-Lafayette (#14 last week) had a 4-0 week and it was done in their typical way of hitting home runs. They swept Troy 25-1 over the three games and then plastered Southeastern Louisiana 13-5 on Tuesday. The NCAA’s best home run and the highest-scoring team hit 8 home runs over the four games. DJ Sanders hit a home run in the last two games against Troy and against SE Louisiana with two grand slams. The Ragin’ Cajuns play at Texas State over the weekend.

The Huskies (#13 last week) played in three tightly contested games and won two of them over Oregon State. Washington won the first game 4-3 as they held off OSU in the bottom of the seventh. Washington was not as lucky in game two as they lost 2-1 and they could not put up more than a solo shot in the fifth inning. The final game was a thrilling 10-8 victory led by home runs from Casey Stagel and Morganne Flores as well as two doubles by Ali Aguilar.

The Huskies are a talented team but are in a rut having lost 6 of the last 9. It only gets tougher as they go on the road to face Oregon over the weekend.

LSU (#15 last week) played a three-game set at Alabama and lost two of three. The Tigers played close in all three games losing 3-0 and 4-2 while winning the middle game 1-0. LSU had 12 hits total over the series as they could not overcome the pitching of Alexis Osorio. LSU has another road trip to Ole Miss over the weekend and faces Northwestern State on Tuesday.

Michigan  (#17 last week) saw their win streak and shutout streak end against Ohio State, but they took 2 of 3 from their rival. Megan Betsa was too much for the Buckeyes over the two wins throwing 10 innings while allowing two runs on four hits and 21 strikeouts. The Wolverines had no answer for Shelby McCombs in the final game as she held them to just 3 hits. Michigan has five conference games over the next week with one on Wednesday day at Michigan State, three games at Maryland over the weekend, and another game against Michigan State on Tuesday at home.

James Madison (#18 last week) swept Towson over the weekend and the final scores would indicate it was rather easy. The first two were easy wins by scores of 15-3 and 7-0. The last was 15-5, but the game was tied at 2 after seven innings. The Dukes scored 13 runs in the eighth inning to provide the impressive final score. As long as the Dukes avoid the hiccups they have seen the past two weeks, they will move back up the rankings. JMU plays at Delaware over the weekend and then play a Tuesday doubleheader at home against Longwood.

BYU (#20 last week) went 5-0 after a win over Mountain West leading Utah State, a sweep of Loyola Marymount, and a win over Southern Utah. The Cougars saw all 8 runs against Utah State come from the bats of Lauren Bell (2 RBIs), Brielle Breland (2 RBIs), and Libby Sugg (4 RBIs). BYU won the three games over Loyola Marymount by a combined score of 15-1. Lexi Tarrow, Caitlyn Larsen Alldredge, and Ashley Thompson combined to record 10 of the 13 RBIs against Southern Utah

McKenna Bull won the first and last game with complete-game shutouts in both while Arissa Paulson won the middle contest giving up three hits and four walks with 8 strikeouts. BYU faces Pacific for a three-game stretch at home over the weekend.

Jacksonville State makes a surprise appearance at #20 mainly due to the lackluster weekend of all the teams in the section below. JSU has won 11 in a row and sit atop the Ohio Valley Conference. Their have losses to South Alabama, Southern Miss (3), Ohio, Loyola-Chicago, Kennesaw State, and UT-Martin. They also lost to Tennessee by a score of 3-2.

Jacksonville State has wins over Nicholls State, Ohio, Kennesaw State, and their biggest: Ole Miss on the road. JSU has a strong team ranking in the top 30 for batting average (28th), ERA (20th), and fielding percentage (17th). Their ability to test top opponents (Tennessee and Ole Miss) makes them a dangerous team down the road. They play a doubleheader on Friday at home versus Austin Peay in their only two games.

Missouri fell out of the top 20 and into the list below. These teams have some work to do to be one of the top twenty, but could make a jump over the new few weeks (in alphabetical order):

Below is the Week Five Power Rankings table: