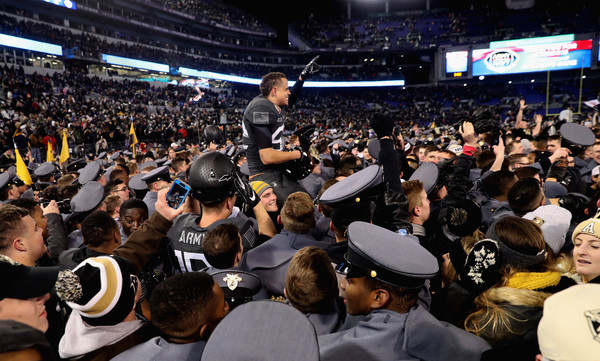 The 2017 College Football season is right around the corner and that means it is prediction season. We will do something different than last year. In 2016, we made 5 predictions for each conference for a total of 55 predictions. The final total was 30.5 predictions correct for a 55.5% hit rate.

Below is the schedule for the 25 predictions.

25. Appalachian State will win the Sun Belt – We start with a team that has done very well since moving up from FCS to FBS. The Mountaineers went 4-8 in 2013 (their final FCS season), however, their three seasons in the FBS have resulted in winning records. 2014 saw them go 7-5, they went 11-2 in 2015 and went 10-3 in 2016. App State tied for the Sun Belt title last year with Arkansas State after both teams went 7-1 in the conference.

This year, the Mountaineers return 7 starters on both offense (scored 29.2 points per game) and defense (allowed 17.8 points per game). The real key is their schedule: no Arkansas State, no Troy, and no South Alabama. Their biggest test is at home versus Louisiana in the final week of the season.

24. (Sun Belt) New Mexico State’s bowl drought will extend to 57 years – We made the same prediction last year and sure enough, the Aggies did not disappoint going 3-9. There are some positives with 7 starters back on offense and 9 back on defense, which makes them the 12th most experienced team in the FBS.

The real reason for putting this prediction here is the brutal schedule New Mexico State faces. In the non-conference slate, the Aggies play Arizona State, New Mexico, and Arkansas on the road and also take on UTEP at home. In the Sun Belt, NMSU has App State (away), Georgia Southern (away), Arkansas State (home), Louisiana (away), and South Alabama (home). If the Aggies manage to get to 6 wins, it will be a well-deserved bowl appearance.

23. (C-USA) The four teams wearing green will not win 25 games combined – Here we have an out of the box prediction. The four teams that wear green are Marshall, Charlotte, North Texas, and UAB. UAB is back to playing football after a 2-year hiatus. The other three teams went a combined 12-25. So this is a slam dunk, right? Not so fast, though we are confident the four teams will not average over 6 wins per team.

Marshall went 3-9 last year in their first losing season since 2010 when Doc Holliday was in his first season. The Herd are one of the favorites in the C-USA East division and could manage hit 10 wins in 2017. Charlotte is an intriguing team because they are in their third full season of FBS football. They went 2-10 and 4-8 the first two years while returning 6 starters on both offense and defense. A similar pattern of progression might move them close to the 6 win mark, but that will take a big improvement on defense (allowed 34.6 points and 453 yards per game).

Over in the West division, we have North Texas and UAB. North Texas went 5-8 last year and, thanks to an oversupply of bowl games, they were able to play a 13th game despite being 5-7. 2016 was the first year of Seth Littrell and year two has 6 starters back on offense and defense. The Mean Green could contend for a bowl game if they can pull a few in-conference upsets.

For UAB, they have the uphill battle of assembling a competitive team. As one would expect, they have very few starters still around with only 4 returning and all of them on defense. Their most winnable games will be versus Alabama A&M, Ball State, and Coastal Carolina. Beyond that, with no competitive games in three years, it is tough to envision them getting close to 6 wins.

We think the four teams mentioned above will end up with roughly 20 wins. With a few upsets, or a big surprise from a team not named Marshall, all four teams they might come close to 25 wins,

22. (C-USA) Both FAU and FIU will make a bowl game – The two Florida schools in C-USA welcome new coaches though both men have previous head coaching experience. Lane Kiffin is now leading Florida Atlantic while Florida International welcomes Butch Davis to the helm. What both teams have going for them is a bevy of returning starters.

FAU has 9 starters back on offense and 8 back on defense. Despite returning their 2016 starting quarterback, the Owls have former Florida State player De’Andre Johnson. He should do well in the Kendal Briles system as should the rest of the offense. The defense is a bit more of a question mark as they return 8 starters off a squad that allowed 39.8 points and 514 yards per game. Having a lot of starters back on a porous defense is not always a good thing. If they can improve 10 points and 100 yards per game then they have a decent chance of making a bowl game assuming the offense takes a big step forward in the new system.

FIU has 7 starters back on offense and 8 on defense. All the skill players return on offense except for the #2 receiver, but there is more than enough depth to replace him. The defense has 8 starters back after allowing 34.8 points and 434 yards per game (5 starters back). They should improve on those numbers even with a new defensive coordinator.

Both squads will probably need an upset to reach 6 wins, but both are more than capable of doing so. C-USA East looks very competitive, which means the potential for both teams to exceed (or miss) the expectations.

21. (Independent) Army will reach a second straight bowl game – Last year we liked Army to beat Navy and win at least 6 games. They did both as they defeated Navy for the first time in 15 years while finishing 8-5 with a bowl win over North Texas in the Heart of Dallas Bowl.

The schedule sets up pretty well again for Army to reach a second straight bowl. The open with Fordham and Buffalo before back-to-back road games at Ohio State and Tulane. Their next four games are versus UTEP, Rice, Eastern Michigan, and Temple with only the Rice contest taking place on the road. The first 8 games will take place without a bye week.

The final four games will be completed over 6 weeks starting with a road game at Air Force on November 4. Duke goes to West Point the following week before another road game at North Texas. The final game is, of course, the annual title versus Navy in December.

What really helps Army this year is the plethora of returning starters with 9 on offense and 7 on defense. The offense put up 29.9 points and 414 yards per game with the points being the most since 1996. The defense allowed 19.8 points and 291 yards per game and part of that was due to the easier schedule. However, the confidence should be high on both sides of the ball in their fourth year under Jeff Monken.

With the combination of experience and a manageable schedule, Army looks poised to reach a second straight bowl game. That would mark only the second time in school history that Army reached back-to-back bowl games (1984-85).

That concludes the first five predictions for the 2017 college football season. Check back next week for predictions 20-16.