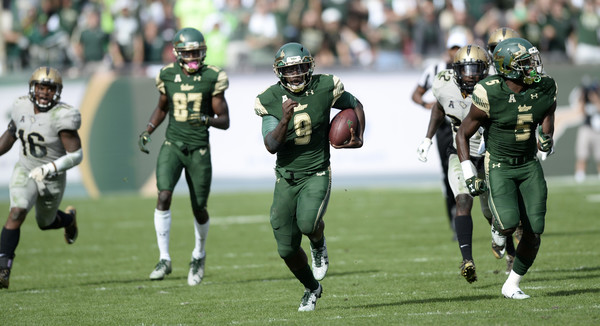 The 2017 College Football season is right around the corner and that means it is prediction season. We will do something different than last year. In 2016, we made 5 predictions for each conference for a total of 55 predictions. The final total was 30.5 predictions correct for a 55.5% hit rate.

This edition is the second and we once again will focus on the mid-majors conferences. Below is the schedule for the 25 predictions.

20. (MAC) Akron will win the MAC East – Terry Bowden will be in his 6th year at Akron and this team looks poised for a big season. 8 starters are back from an offense that put up 27.4 points and 387 yards per game. The 2016 offense had only 3 starters back and now the top quarterback and running backs return. The offense has to contend with the loss of the top 2 receivers, but do have the talent to replace them.

Akron has a potentially difficult conference schedule with all 8 games packed into 8 weeks. They start with Bowling Green (away) and Ball State (home) before back-to-back road games at MAC West contenders Western Michigan and Toledo. Even a split of those two games would be huge for the Zips. Akron ends the conference season Buffalo (home), Miami (away), Ohio (home), and Kent State (home). The run-in is favorable for them to steal the MAC East from Miami and Ohio.

19. (MWC) Boise State will lose at least three games – This does not seem like much of a prediction, but let’s provide some historical context. Since the Broncos have moved from the FCS to FBS, they have only 1 stretch of three or more seasons when they lost at least three games: 1996-1999. That coincided with their move to the top level of collegiate football. Boise State has shown a great pattern of bouncing back when they have a multi-loss season.

The 2017 Boise State team has five starters back on offense and four on defense, which will hurt the Broncos. The duo of Jeremy McNichols (RB) and Thomas Sperbeck (WR) depart for veteran quarterback Brett Rypien, but Rypien still has a lot of talent around him. They will need to step up to help him and the team. The defense loses the top four tacklers and six of the top seven from 2016. Again, there is talent on both sides of the ball to help absorb some of the departures, but that lone does not mean success.

The schedule is difficult for Boise State. They take on Troy (home), Washington State (away), Virginia (home), and BYU (away) in the non-conference portion. In the Mountain West, they have to play San Diego State (away), Wyoming (home), Nevada (home), Colorado State (away), and pesky Air Force (home). The Falcons have beaten Boise State three straight seasons although they look weaker this season.

There is no doubt Boise State is talented enough to win double-digit games and even the Mountain West, but it looks like they will see a third straight 3+ loss season for the first time in nearly two decades. That is still impressive given their relatively short history in the FBS.

18. (MWC) Air Force will reach a bowl game – In 10 seasons under Troy Calhoun, the Falcons have only failed to reach a bowl game once. The non-bowl season was in 2013 when they went 2-10 going winless in conference play.

A 10th bowl game in 11 seasons is not a slam dunk for Air Force. They have six starters back on offense led by experienced quarterbacks Arion Worthman and Nate Romine. Top receiver Jalen Robinette has moved on, which may lead to more rushing plays. That will put extra pressure on Worthman and Romine as well as Tim McVey, who is the top returning running back by a wide margin. The pieces are there for Air Force to do well on offense.

The real worry on paper is the defense, which returns just one starter and loses 12 of the top 13 tacklers. Grant Ross is back at linebacker and he was the third leading tackler in 2016. The defense allowed 26.2 points and 365 yards per game in 2016 with 9 starters back so on paper it looks like they will take sizable a step back. The last time Air Force had only a few starters back on defense was in 2012 when they had 2. That group did well enough to allow only 29 points and 409 yards per game, which represented marginal increases of .6 points and 23 yards from the 2011 numbers.

Air Force will need a few upsets to reach 6 wins and a bowl game, but the path is there. Air Force takes on VMI (home), Michigan (away), Navy (away), and Army (home) in a non-conference schedule sprinkled throughout the first 9 weeks. From the West division, they will play San Diego State (home), UNLV (home), and Nevada (away). Their best chances are the latter two though a porous defense will hurt their opportunity to reach 6 wins.

The Falcons have to deal with a contentious Mountain division of New Mexico (away), Colorado State (away), Wyoming (home), Boise State (away), and Utah State (home). The Falcons could win 3 of those games, which would give them a great chance to get to a bowl.

17. (AAC) 9 teams will make a bowl game – The American Athletic Conference has been on an upward swing since the start of the chaotic conference realignment that began 7 years ago. 2013 was the first season of AAC football and they sent 5 of their 10 members to a bowl game.

2014 saw 5 of 11 teams go bowling followed by their best season when 8 of 12 teams went to a bowl game. 2016 finished with 7 teams going to a bowl game and a lot of preseason hype around Houston.

This year looks like a great opportunity for the AAC to put 75% of its members into a bowl game. The AAC has 7 bowl tie ins and the oversupply of bowl games make it easier for teams to participate than ever before. (Side note: there is actually one less bowl game than 2016 with the cessation of the Poinsettia Bowl).

In 2017, South Florida is the clear favorite for the East division, but Temple (10-4 in 2016, but a new coach this year) and Central Florida (6-7 in 2016) also look likely to get back to a bowl game. The bottom half of the East looks like a conundrum between Cincinnati, Connecticut, and East Carolina. The Bearcats underachieved in 2016 and now have Luke Fickell in his first season. They could improve enough to get a bowl bid.

Connecticut welcomes Randy Edsall back to Storrs after a six-year absence. Edsall made a bowl game in each of his last four seasons and has 7 starters on both offense and defense to work with. He could steal a bowl bid though the offense will need a lot more than 14.8 points per game. East Carolina is the weakest team in the East and they will be in year two of Scottie Montgomery’s reign. They have a tough schedule out of conference (West Virginia, Virginia Tech, BYU) and will probably struggle to top the 3 win total they put up in 2016.

The West looks very competitive between Houston, Tulsa, Memphis, and Navy. Any of those four could win the division and even SMU and Tulane look capable of getting a bowl bid.

SMU will be in year three with Chad Morris and he has 9 starters back on offense and 5 on defense. They should open 4-1 to give them great confidence to grab the last 2 needed wins. Tulane has a bit more work to do in the second season of Willie Fritz. He has 8 starters on both offense and defense, which looks like a good thing. The offense improved by 4.4 points on offense and 8.6 on defense in his first season. Another improvement like that in 2017 and Tulane will be bowling.

16. (AAC) – South Florida and Memphis will play in the AAC Championship Game – South Florida is in year one under Charlie Strong and has a great situation on his hands. He walks into 7 returning starters on offense and 9 on defense. Quinton Flowers will lead the offense that put up 43.8 points. Flowers led the team in both passing and rushing last year and could have an even better year.

The 2016 defense actually allowed quite a few points at 31.6 per game and 482 yards per game. Now 9 starters are back for Charlie Strong, which should mean a big improvement on that side of the ball. Their toughest games all come at home against Temple, Houston, and Tulsa.

The West division is wide open and we will go with Memphis to win it. All the pieces are back on offense for Mike Norvell between quarterback Riley Ferguson, running back Doroland Dorceus, and receivers Phil Mayhue and Anthony Miller. An offense that put up 38.8 points per game in 2016 now has 9 starters back and looks set to put up over 40 points per game.

The defense for Memphis has 6 starters back from a group that allowed 28.8 points and 455 yards per game. The top two tacklers, Jonathan Cook (88) and Genard Avery (81) are both back as are 5 of the front 7. The main concern is the secondary, but they do have 2 Oklahoma transfers in the mix.

Memphis will have tough road games at Central Florida, Houston, and Tulsa, but winning two of those games would put them in a great position to make their first AAC Championship Game.

That concludes the second set of five predictions for the 2017 college football season. Check back next week for predictions 15 through 11.