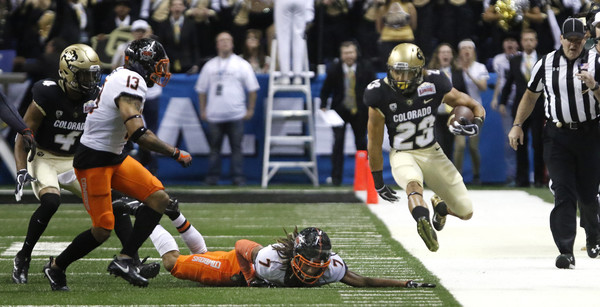 The 2017 College Football season is starting later this month and that means it is prediction season. We will do something different than last year. In 2016, we made 5 predictions for each conference for a total of 55 predictions. The final total was 30.5 predictions correct for a 55.5% hit rate.

This edition is the third and we will start predicting the Power 5 Conferences. Below is the schedule for the 25 predictions.

15. (Big 12) Oklahoma State will lead the Big 12 in points scored – The Cowboys have 7 starters back on offense including the key skill positions. Quarterback Mason Rudolph threw for 4,091 yards (63.4%) with 28 touchdowns and only four interceptions. Three of his top four targets from 2016 return led by James Washington. Washington had 71 catches for 1,380 yards with 10 touchdowns while Jalen McCleskey had 73 receptions for 812 yards and 7 touchdowns. There is also the threat of Justice Hill in the backfield with Rudolph as he had 1,142 yards and 6 touchdowns. With three starters back on the line, this team should eclipse 2016’s numbers of 38.6 points and 495 yards per game.

The Big 12 is full of potent offenses starting with Oklahoma. The Sooners had 43.9 points per game in 2016 and lost four big names: head coach Bob Stoops, receiver Dede Westbrook, and running backs Joe Mixon and Samaje Perine. Even with Heisman candidate Baker Mayfield back, the Sooners could see a slight step back on offense.

Another potent team is TCU who returns 10 starters from a group that underachieved in 2016 when only 2 starters returned. Every top skill position player returns for the Horned Frogs and they will easily eclipse the 31 points per game they averaged in 2016.

Both Texas and Baylor welcome new coaches. Texas has Tom Herman and his offense though there will probably be a few hiccups as it is installed. Baylor is typically one of the highest-scoring offenses (over 44 points per game from 2011 through 2015) but Matt Rhule has a more pro-style system.

The other big threat to the scoring title is Texas Tech under Kliff Kingsbury’s high flying offense. The Red Raiders lose quarterback Patrick Mahomes and top receiver Jonathan Giles, but most other key pieces return. They will still put up points, but with a new starter might lead to a drop off in points (43.7 per game in 2016).

2017 sees a much more experienced offense with 10 starters back. Kenny Hill had an up and down season with 17 touchdowns and 13 picks, but he returns all of the key position players. After putting up 31 points and 463 yards per game in 2016, they should get close or even go beyond 40 points per contest.

On defense, 7 starters are back including 5 of the top 6 tacklers. Travin Howard (130 tackles) and Ty Summers (121 tackles) will command the secondary and linebackers respectively. Even in a high scoring league like the Big 12, the defense should improve from the 28 points and 427 yards per game they allowed in 2016.

The Horned Frogs have five Big 12 road games including some tough ones at Oklahoma State, Kansas State, Oklahoma, and even a potentially tricky game at Iowa State. The Oklahoma State game is in week four and could end up deciding one of the participants for the Big 12 Championship Game. TCU is flying under the radar and this team is in a very good position to win the Big 12.

13. (Big 12) Iowa State will reach a bowl game – The Cyclones have not been to a bowl game since 2012 when they played in the Liberty Bowl but lost to Tulsa 31-17. Matt Campbell was hired in late 2015, just a day after former coach Paul Rhoads coached his final game. Iowa State went 3-9 in 2016 and the biggest highlight was their dismantling of Texas Tech 66-10 in the penultimate game of the year.

The second-year should see improvements on both sides of the ball. The offense had a respectable 27.7 points per game in 2016 with just three starters back, a new coach, and constant quarterback shuffling. Jacob Park is the man now after throwing for 1,791 yards with 12 touchdowns and 5 interceptions. The top two receivers and running backs return including Allen Lazard. Lazard had 69 catches for 1,118 yards with 7 touchdowns and needs 678 yards to become the school’s all-time leading receiver. The offense should top 30 points per game with more quarterback stability and more experience and knowledge of the offense.

The defense did okay in 2016 with a new coach and 7 starters back. They allowed 31.3 points and 453 yards per game, which was actually 1.4 points per game less. Six starters are back and a slight improvement would go along way for this team.

The schedule starts with Northern Iowa and Iowa at home before a road trip to Akron. The Cyclones need a 2-1 at worst to give them any shot of reaching a bowl. They only get four home games in the Big 12 (Texas, Kansas, TCU, and Oklahoma State) and will probably need to win at least two of those. The five road games are at Oklahoma, Texas Tech, West Virginia, Baylor, and Kansas State. There is no margin for error given their schedule, but the Cyclones have the pieces to get 6 wins in Matt Campbell’s second year.

12. (Pac-12) Washington State will reach double-digit wins – We are very bullish on the Cougars this year thanks to 16 returning starters (7 on offense and 9 on defense) and schedule (not easy, but manageable).

Mike Leach will be in year 6 at Wazzu with a very experienced Luke Falk. Falk is a senior in 2017 and he loses two of his top three wideouts (Gabe Marks and River Cracraft). Despite those two, Falk distributing the ball will help absorb the losses. Also returning are the top three running backs who averaged 120 yards per game in 2016. That was the highest amount for the offense under Leach at Washington State.

One of the bigger surprises the last two seasons has been the defense. In 2015 they allowed 27.7 points and 417 yards per game while 2016 was small improvements to 26.4 points and 406 yards per game. Those have been the best numbers under Leach and coincides with the hiring of defensive coordinator Alex Grinch. With 9 starters back in 2017, there could be even more improvement in the numbers.

The schedule is not easy, but the Cougars do not play a road game until October. They open with five straight at home against Montana State, Boise State, Oregon State, Nevada, and USC. The Broncos and Trojans will be tough contests, but being in Pullman will give them a better chance to win both games.

October is a road stretch with Oregon (away), California (away), Colorado (home), and Arizona (away). All four are winnable though a resurgent Oregon team might be the trickiest. The schedule closes with Stanford (home), Utah (away), and Washington (away) after a bye week.

The Pac-12 North looks very competitive, but the Cougars are set up for success on offense and defense. Washington State is a dark horse to win the North so long as they take care of USC and Washington, but those would both be big upsets.

The offense returns mostly intact with 9 starters back, however, they lose quarterback Sefo Liufau. His replacement is Steven Montez and he did get some playing time in 2016 when Liufau was injured so the drop off may not be as severe. All the top receivers return as does running back Phillip Lindsay (1,252 yards and 16 touchdowns). The offense put up 31.1 points and 437 yards per game in 2016 and should get close to or top those numbers again this season.

The defense is a major concern with only three starters back from a group that allowed 21.7 points and 343 yards per game. Three of the top five tacklers are back with two of those in the secondary. There are quite a few upperclassmen as projected starters, but the numbers will still get worse.

The Buffs will start with four games within the state of Colorado: Colorado State (in Denver), Texas State, Northern Colorado, and Washington with the latter three at home. The CSU game may not be the walk in the park as expected because the Rams will have already played one game and look like a contender in the Mountain West.

Three of the next four are away: UCLA, Arizona (home), Oregon State, and Washington State. The season concludes with California (home), Arizona State (away), USC (home), and Utah (away). There are enough wins on the schedule (both home and away) for the Buffs to make back-to-back bowl games for the first time since 2004-05.

That concludes the third set of five predictions for the 2017 college football season. Check back next week for predictions 10 through 6, which will be one more prediction for the Pac-12, three for the ACC, and one for the SEC.