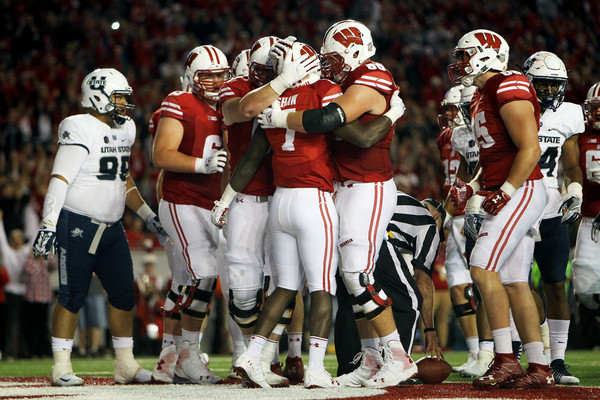 The Wisconsin Badgers opened the season with an emphatic 59-10 victory over Utah State. While it was not very attractive in the first half, the ninth-ranked Badgers cruised to an easy win with a suffocating second-half performance. Below are some thoughts, and observations noticed in the Friday night win.

1. The offense starts slow – If you happened to read this column in 2016, one of the constant worries was the offense starting slow. Well, 2017 started no different as the offense needed nearly 2 full quarters to even get points on the board. There were fumbles, drops, penalties, sacks, and mistakes that are not typical of Wisconsin. That begs several questions:

Was this performance just first-game jitters? Did the Friday night lights play a role? Is the offense too predictable in the early stage of games?

We are leaning to the fact it was the first game where timing can be a bit off. It is unwise to make a conclusion based on a single game, but this is worth keeping an eye on to see if this trend becomes a mainstay as it did in 2016.

2. Jonathan Taylor has a breakout game – He is only a freshman, but a good one at that if this game was any indication. Taylor showed speed and the ability to keep the legs churning. He finished with 87 yards on 9 carries and a touchdown.

It was an impressive showing and it never hurts to be running behind an offensive line that the Badgers typically employ. Continue to watch the progression of Taylor as he splits carries with Bradrick Shaw (84 yards and 1 TD on 18 carries) and Chris James (5 carries for 16 yards).

3. Scoring production was evenly spread out – The Badgers had 8 touchdowns against the Aggies. And 8 different players scored a touchdown. How about that for spreading the production around? Shaw, Taylor, Garrett Groshek, and Austin Ramesh provided the rushing scores. Troy Fumagalli, Quintez Cephus, and Zander Neuville had receiving scores as Alex Hornibrook had a highly efficient passing game going 15 for 23 with 244 yards and the 3 touchdown passes.

The penultimate score was probably the most fitting. Joe Ferguson, the grandson of current Wisconsin Athletic Director Barry Alvarez, returned an interception 99 yards for a touchdown.

4. The defense rose to the occasion – Utah State had a strong start with 88 yards on offense and a 10-0 through one quarter. After that, the Badgers defense imposed their will. While many will point to the ejection of Utah State’s Jalen Davis as the turning point, this defense was hitting their stride about the same time and it is usually devastating for opponents when that happens.

While the Badgers gave up 304 yards (219 passing and 85 rushing), nearly half of those came on the final three Utah State drives when the game was no longer in doubt. The Badgers forced 4 turnovers including interceptions on back-to-back Utah State drives to end the first half and start the second half. That led to a tie game at halftime and then a two-touchdown lead early in the third.

The most noticeable part of the defense was their hunger to keep the Aggies to only 10 points. They stopped the Aggies once on downs in the third quarter, then they had the pick-six midway through the fourth quarter and finally ended the game with a pass breakup in the end zone.

This Badgers defense, despite the loss of Jack Cichy for the season, looks just as good as the defenses of the previous few seasons. Keep in mind that the Badgers are on their third defensive coordinator (Jim Leonhard) in as many seasons.

Wisconsin will play at home next Saturday against Florida Atlantic. The game is scheduled for 12 PM Eastern Time on the Big Ten Network.