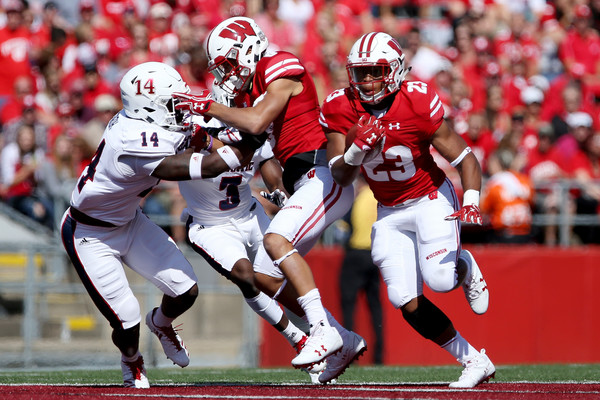 The Wisconsin Badgers have opened the season 2-0 after a 31-14 win over Florida Atlantic on Saturday afternoon. Like the opening game versus Utah State, there were bright spots and some concerns. We provide our notes and takes on both this game and the 2017 season.

1. Jonathan Taylor makes his case to be the starter going forward – Taylor got the start against FAU after an injury sidelined Bradrick Shaw and Taylor showed the coaches the decision was an excellent one. Taylor showed both his power and speed on his two first-half touchdown runs.

“How does Wisconsin do it?”

Taylor finished the game rushing for 223 yards and 3 touchdowns on 26 carries. His backup, Chris James, also showed some good rushes after a tepid first game. James finished with 101 yards on 16 carries and the Badgers averaged 6.6 yards per carry. There are plenty of positive things to say about Taylor and his touchdown runs have been great to watch over and over again.

A few things that are worth bringing up:

Based on what we have seen in two games, Taylor should be the starter at running back with Shaw and James getting plenty of touches as well. It is a long season and three different options behind the offensive line will help the entire offense.

2. Alex Hornibrook struggled to see the field – It was clear that Alex Hornibrook was not having a good day. The timing was not there as he constantly threw behind his receivers and then there was the horrendous interception. On that particular play, he was going backward with a defender in his face and he forced a throw without even seeing the defender that made the interception. It was a throw that should not have happened and it led to a touchdown for FAU.

Late the second quarter, Hornibrook threw another pass on an out route to the sideline that was woefully short and nearly picked. Luckily for him, it was dropped, but another example of his timing and arm strength being not good enough.

Overall, Hornibrook has to get better if he wants to stay the starter. The timing, precision, arm strength, and general awareness all are a concern though he is just a sophomore. There is time for improvement, but how long does he have before Jack Coan is called on for a bigger role?

3. The secondary gets torched – Florida Atlantic had 142 yards passing, yet it felt like it was far more. FAU’s DeAndre McNeal had catches of 35 and 63 yards with the latter going for a touchdown. There was also another 35-yard pass play to McNeal in the third quarter following Taylor’s fumble, but that was negated due to a holding.

Given the memories of 2016 when Penn State moved up and down the field on the Badgers at will in the Big 10 Championship, it is worth watching this unit to see how they respond going forward.

4. Injury concerns are mounting – The defense was already short due to the losses of Jack Cichy and Zack Baun for the season. During practice on Wednesday, Chikwe Obasih suffered a knee injury that will keep him out for a few weeks.

Now, the offense has some injury worries with Shaw ruled out and then right guard Beau Benzschawel left the game in the second quarter and did not return. There is currently no news on the severity of the injury, but the loss of a starter on the line does not bode well.

Was told #Badgers Benzschawel lobbied to stay in. Staff told him to call it a day.

Chryst said he has no injury update on Beau Benzschawel

5. The overall performance felt mediocre – The Badgers dominated this game on offense with 564 yards compared to 248 yards for FAU. They had just one penalty and held the ball for over 38 minutes. However, it was an inefficient game.

The Badgers turned the ball over twice, were stopped three times inside the two-yard line early in the second quarter, several passes were dropped, and even Rafael Gaglianone missed a 37-yard field goal. The first half against Utah State and most of this game was nothing like the Badgers we expected to see in 2017. The entire team will have to improve quickly because the non-conference schedule ends next week with a road trip to BYU.

Next week’s game at BYU will be at 3:30 PM Eastern Time and can be seen on ESPN. The Badgers will have a bye the following week before starting Big 10 play against Northwestern at home on September 30.