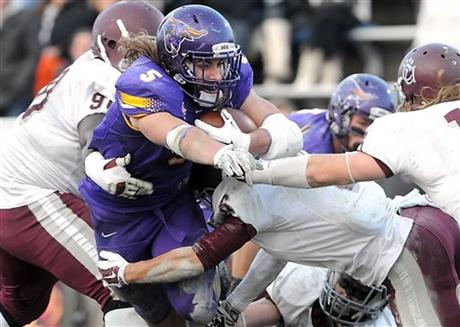 Here is the 2014 NCAA Division 2 National Championship Preview between Minnesota State-Mankato and Colorado State Pueblo. The game will be at 4 PM ET on Saturday and can be seen on ESPN2 live from Sporting Park in Kansas City, Kansas. The forecast for Kansas City on Saturday is a high of 40 degrees and sunny skies.

Minnesota State-Mankato (14-0) Road To The Championship

Second Round – 24-21 win over Pittsburg State

Minnesota State-Mankato has won by an average score of 38 to 17 in their three playoff games.

Colorado State Pueblo has won by an average score of 31 to 16 in their three playoff games.

Minnesota State-Mankato is favored by 16.5 points with the Over/Under at 43 points.

Based on the playoff results, it is clear that both teams have the ability to score a lot of points, but also play some defense. For the entire season, not just the playoffs, Mankato has out-scored opponents 43-13 while Pueblo out-scored opponents 35-14. Both teams gave up an average of 300 yards of offense per game this season. Everything is pointing to a defensive game and that is what this author is expecting as well.

In a defensive battle, it will come down to the rushing attack for Mankato, as it normally has for them. They average 251 yards a game on the ground compared to 209 yards through the air. Connor Thomas will be the top back for Mankato and has done well in the last two games with 258 yards and 2 rushing touchdowns (he also has a receiving touchdown). Thomas is far from the only player who will carry the ball. Mankato will also put the ball in the hands of Andy Pfeiffer (666 yards rushing with 8 touchdowns) while quarterbacks Ricky Lloyd and Nick Pieruccini will also be toting the rock. Both QB’s can pass and run so they will be dangerous regardless of which play is called.

Mankato will need to zero in on Pueblo running back Cameron McDondle who has rushed for 1,901 yards and 16 touchdowns this year. He does not lose the ball much with only three fumbles (two lost) on 305 rushes this year. McDondle has 346 yards and 3 touchdowns on the ground during the playoffs. Quarterback Chris Bonner has thrown for 3,100 yards with 29 touchdowns to 7 interceptions in 2014. In the three playoff games he has 571 yards passing with 6 touchdowns and only one interception, which he threw in the 52-14 blowout win over Angelo State in the second round.

This game really does have the feel of a defensive battle with both offense pounding the ball on the ground. Mankato will surely be testing the defensive front 7 of Pueblo to see if they can withstand the pounding and for how long. Pueblo will favor the pass a bit more than the run, but McDondle should get plenty of touches.