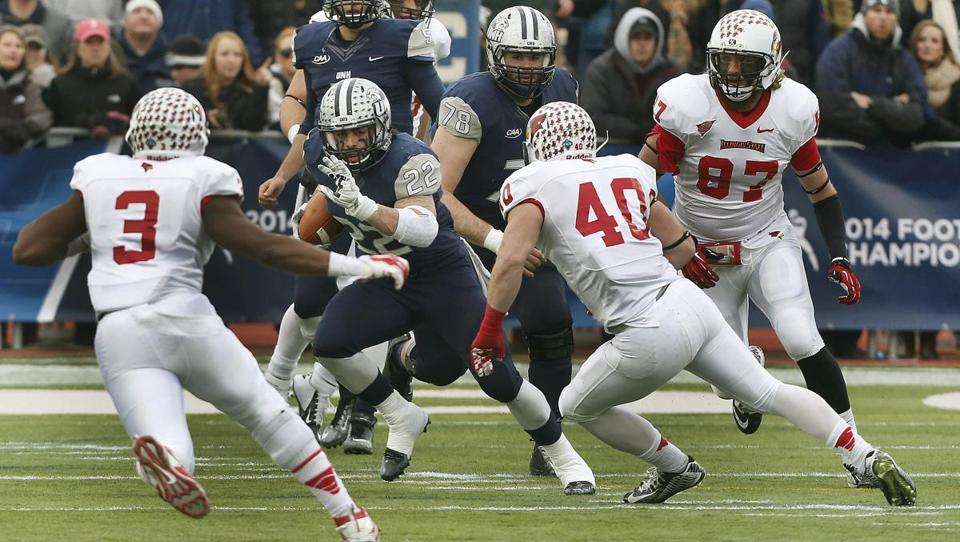 The FCS National Championship for the 2014 season is now set. One game was exciting while the other was a second-half blowout. The two games were played over two days with Sam Houston State at North Dakota State on Friday evening and Illinois State at New Hampshire on Saturday afternoon. Be sure to check out the predictions made here as you read through the two recaps! Here is the 2014 FCS Playoffs Semifinals Wrap Up.

A big second half from North Dakota State allowed them to pull away from Sam Houston State and win 35-3. The game was 7-3 at the halftime interval in favor of the Bison while John Crockett accounted for 232 yards and 3 touchdowns on offense.

The first 5 drives of the game all resulted in three-and-outs with 3 from SHSU and 2 from NDSU. The third drive of the game for the Bison appeared to be headed the same way until Crockett broke a screen pass for 31 yards. 5 plays later, Crockett did the honors of scoring the first points of the game on a 3 yard run to make it 7-0. The Bearkats ended the first quarter with a drive going at midfield after starting at their own 13 yard line.

The first play of the second quarter was Jared Johnson throwing a beautiful strike to Gerald Thomas in stride to get them down to the NDSU 11 yard line. The Bearkats would settle for a 22 yard field goal from Luc Swimberghe to make it 7-3. The Bearkats’ next drive ended with a missed 46 to the left. Neither team threatened for the rest of the half with the Bison holding a 7-3 lead at halftime.

The third quarter began with the Bison getting the ball first. On third and four from their own 49 yard line, Carson Wentz threw a pass that was picked off by Mikell Everette at the SHSU 39 yard line. The Bearkats were unable to do anything after going three-and-out.

The next drive for North Dakota State would give them a double-digit cushion in a hurry. The third play of the drive was Wentz to Crockett on a wheel route out of the backfield for a 35 yard gain. The following play, King Frazier made one defender miss and was off to the end zone for a 33 yard touchdown run. That made it 14-3. The lead became 21-3 on the first play of the next drive. Crockett took a simple handoff to the right, broke a tackle, and sprint to the end zone for a 55 yard score. The third quarter ended with the Bison leading 21-3 and at the Bearkats’ 29 yard line.

Six plays into the fourth quarter was Crockett’s third touchdown run of the game from 10 yards out. The Bearkats’ tried to respond on the next drive, but on first and 10 from the Bison’s 33 yard line, Jared Johnson was picked off by Nick DeLuca undercutting the route. That led to a 14 yard touchdown pass from Wentz to RJ Urzendowski to cap the scoring.

Jared Johnson went 20 of 31 for 227 yards with no touchdowns and an interception. He was also the leading rusher with 66 yards on 25 carries. Keshawn Hill had 12 carries for 26 yards. Yedidah Louis finished as the top receiver for SHSU by catching 6 passes for 62 yards. Gerald Thomas had 2 catches for 60 yards while Hill finished with 7 catches for 50 yards.

Carson Wentz finished 13 of 19 for 179 yards with a touchdown and an interception. John Crockett was the start for the Bison by running 26 times for 166 yards and 3 touchdowns. He also was the leading receiver with 2 catches for 66 yards. King Frazier had 3 carries for 41 yards and a touchdown. Andrew Bonnet had 4 catches for 44 yards.

Both teams were searching for their first appearance in the FCS National Championship. For three quarters it appeared that New Hampshire was going to be the team, but a stunning fourth quarter rally by Illinois State allowed them to win 21-18.

The Redbirds scored first with a 33 yard field goal from Nick Aussieker to lead 3-0. The Wildcats had an excellent opportunity on the next drive. A short kick and personal foul penalty put them at the Illinois State 42. That led to a 4 yard touchdown run from quarterback Sean Goldrich to put them in the lead 7-3. Tre Roberson and the Redbirds responded well by moving inside the New Hampshire 10 yard line. On first and goal from the nine, Roberson scrambled for 4 yards but lost the ball and the Wildcats ended the scoring threat by recovering the ball.

The first play of the second quarter was Goldrich’s 47 yard pass to Harold Spears to the ISU 44 yard line. Six plays later was Nico Steriti’s 6 yard touchdown run and a two point conversion made it 15-3. The Redbirds missed a 40 yard field goal on the ensuing drive but did get a 23 yarder with under 2 minutes to play. A big return by Dalton Crossnan gave New Hampshire the ball at midfield, but Goldrich was intercepted three plays later. The first half ended with New Hampshire leading 15-6.

The Wildcats started with the ball to start the second half and extended their lead to 18-6 after settling for a 25 yard field goal from Brad Prasky. The remainder of the quarter was a struggle for both offenses until Illinois State ended the quarter with Roberson hitting Anthony Warrum for a 36 yard gain to the New Hampshire 19 yard line.

The fourth play of the final quarter was Marshaun Coprich getting to the edge and scoring from 2 yards out to make it 18-13 with over 14 minutes to play. The Redbirds forced a punt on the next drive to set up the eventual game-winning score. On second and two from the New Hampshire 47, Roberson kept the ball and ran it to the house after his line opened up a hole for him. They went for two and converted it via Jon-Marc Anderson’s run to lead 21-18.

The Wildcats still had a chance to score. They moved it into Illinois State territory before being faced with a fourth and 3 at their 46. On the fourth down play Goldrich found Kyon Taylor, but for no gain. The Redbirds got the ball back and eventually ran out the clock for the victory.

Sean Goldrich went 19 of 33 for 214 yards with no touchdowns and an interception while also having a rushing touchdown. Nico Steriti finished wtih 100 yards and a touchdown on 19 carries. R.J. Harris had 6 catches for 68 yards, but was injured with a concussion early in the fourth quarter. Harold Spears had 2 catches for 61 yards.

The FCS National Championship game for the 2014 season will be played on Saturday, January 10, 2015. The game will be played in Frisco, Texas at FC Dallas Stadium. Game time is 1 PM Eastern Time with the #5 Illinois State Redbirds (13-1) taking on the #2 North Dakota State Bison.

Be sure to check back to see the preview and prediction for the FCS National Championship.