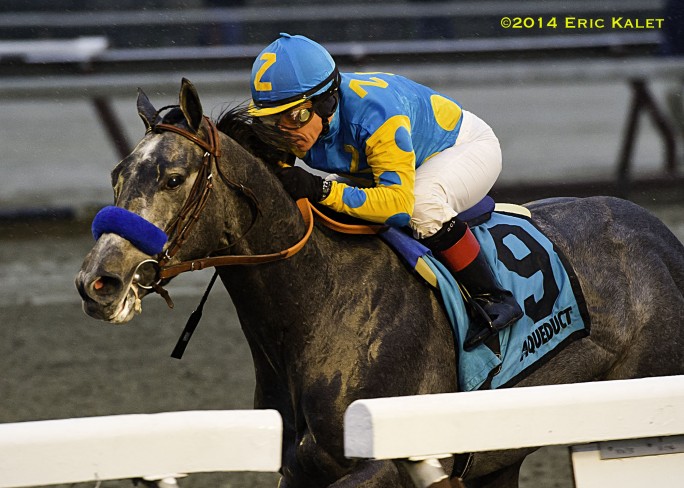 An outside draw, a bobble at the start, and a wide trip was not enough to keep El Kabeir from handling his Jerome Stakes foes on Saturday.

El Kabeir broke well before a bobble left him three wide for much of the race. Ostrolenka grabbed the lead early on with Nasa right there all the way to press him. Ackeret was 2 lengths off the lead with El Kabeir after the first quarter with Royal Burgh, Now We Are Free, and Mini Cosmo behind the leading quartet. General Bellamy was well off the pace for much of the race and was last for the first half mile.

The first three remained unchanged with Ostrolenka leading for the opening three quarters of a mile. On the far turn he was pushed by Nasa and El Kabeir. Entering the stretch it was clear that only Nasa and El Kabeir were in contention to win with the latter taking over midway down the stretch to power away for a 4 3/4 lengths score. Nasa was a clear second by 7 3/4 lengths of a hard charging General Bellamy, who trailed near the back of the pack for much of the race.

Ackeret finished fourth followed by Ostrolenka, Mini Cosmo, Now We Are Free, and Royal Burgh in last. Tencendur was scratched before the race. Ostrolenka set early fractions of 23.79, 48.47, and 1:13.75 in the first 6 furlongs. The final time for 1 Mile and 70 yards was 1:44.69 over a track labeled as good.

El Kabeir was ridden by Charles Lopez and trained by John Terranova II. Lopez replaced Calvin Borel after the latter did not ride due to a death in the family.

The top four finishers all earned points toward the Kentucky Derby Leaderboard. El Kabeir earned 10 points, which brings him to a total of 21 points and atop the leaderboard. Nasa earned 4 points, General Bellamy earned 2 points, and Ackeret earned 1 point. Those were the first points earned for the latter three.