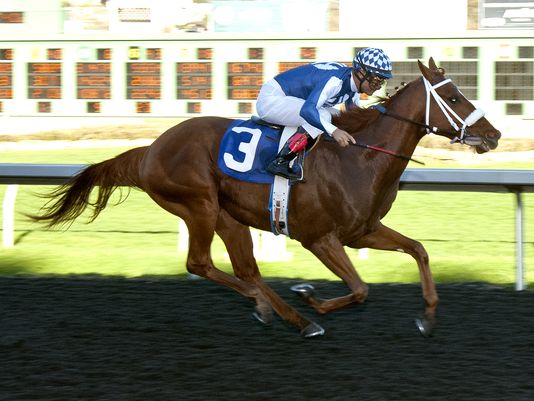 A fast closing finish put Metaboss in the winner’s circle of the El Camino Real Derby at Golden Gate Fields. The three year old won by 2 1/2 lengths over Cross the Line and Conquest Typhoon.

The race began with multiple horses going for the lead. Indianaughty and Ernest Shackleton both went for the lead and Conquest Typhoon only a length off those two while three wide. Donji was in fourth, Cross the line was in fifth, and Stand and Salute was sixth with those three about 2 lengths off the lead. Mischief Clem, Metaboss, Soul Driver, and Harmonic were the final quartet.

Despite the trio of horses battling for the lead, there was not much pace to the race. The opening quarter went in 25.29 while the half mile was timed in 49.25. The half mile was still the top three batting for the lead with Mischief Clem making a middle move into fourth. Stand and Salute was fifth, Cross the Line was sixth, Soul Driver was seventh, Metaboss was still in eighth, Donji was ninth (and dropping out), and Harmonic was in last by 7 lengths.

On the far turn the race was blown wide open with nearly every horse (save Donji) in contention with a chance to win. Conquest Typhoon was still battling for the lead as they turned for home with horses lining up seven across the track as they were approaching the final furlong.

Eventual winner Metaboss made a sweeping move that began on the started turn and ended with him in front by 2 1/2 lengths. Cross the Line had some trouble in the stretch, but got up for second by a head over Conquest Typhoon. Harmonic came from last to grab fourth as the second longest shot on the board.

Metaboss is a three year old son of Street Boss out of the Free House mare Spinning Yarns. He was ridden by Alex Solis and is trained by Jeff Bonde. Metaboss paid $15.20 to win, $7.80 to place, and $4.80 to show. The final running time was 1:49.92 for the one and one eighth miles.

Metaboss earned 10 points for the victory, Cross the Line earned 4 points, Conquest Typhoon earned 2 points, and Harmonic earned one point. Only Conquest Typhoon had perviously earned points towards the Kentucky Derby Leaderboard and he now has 6 points total.

The Road to the Kentucky Derby continues on Monday with the grade 3 Southwest Stakes at Oaklawn Park.