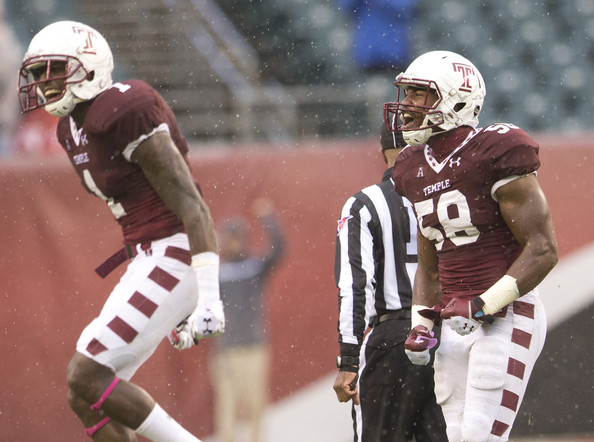 Temple football players Dion Dawkins and Haason Reddick have been suspended following their arrests on Monday evening. The Philadelphia Inquirer reported that the two players surrendered to police on Monday.

Their arrests stem from an incident on January 18 at a party. The victim alleges that Dawkins and Reddick assaulted him and left him with a broken orbital bone and concussion. As a result, the senior student has withdrawn from classes at Temple, but is hoping to continue classes in the fall.

Temple released the following statement in light of the arrests:

“Temple University is aware of allegations of improper conduct by two of its student-athletes at an off-campus location in January. The university has, and will continue, to fully cooperate with the Philadelphia Police Department in its investigation and will take appropriate actions outlined in the Student Conduct Code. The two students have been suspended from football team activities pending further investigation.”

Reddick will be a redshirt junior in 2015. He played in 9 games as a freshman in 2013 as a linebacker and went on to record 14 tackles including 4 tackles-for-loss. He also had a sack and recovered a fumble. In 2014, Reddick played in 9 games and made 2 starts before missing the final two games due to injury. He finished last year with 23 tackles, 7 tackles-for-loss, and one and a half sacks as a defensive lineman.

Dawkins joined Temple in January 2013 and played in the first five games of 2013 before an injury ended his season early. He also started two games in 2013 with one at left tackle and one at right tackle. In 2014, he was named the starter at left tackle and he played in 11 of 12 games. He managed to record one catch for 7 yards on a deflected pass in the game versus Navy.