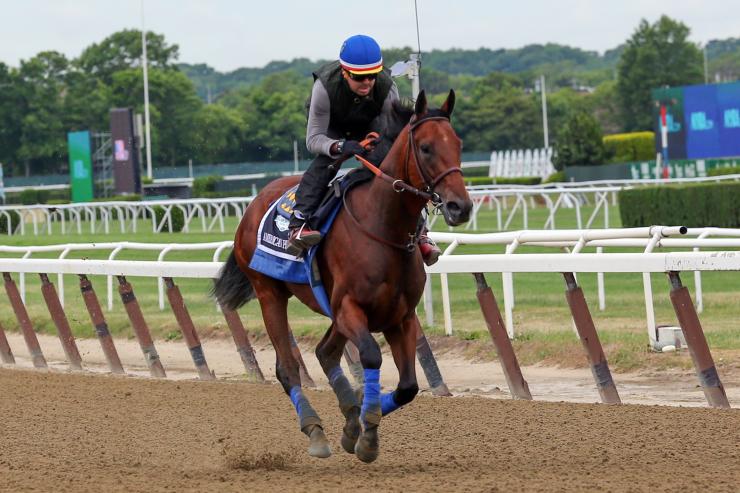 The 2015 Triple Crown culminates on Saturday with 2015 Belmont Stakes. Once again, there is the possibility of a Triple Crown winner with American Pharoah having won both the Kentucky Derby and Preakness Stakes in May.

A field of eight has been assembled to vie for the 2015 Belmont Stakes that carries a purse of $1,500,000. They will go one mile and one-half (12 furlongs) over the main track dubbed “Big Sandy.”

Post time for the Belmont Stakes is at 6:50 PM Eastern time and is carded as the 11th of 13 races on Saturday. Free past performances can be found here.

The table below provides the entries along with the jockey, trainer, and morning line odds.

1. Mubtaahij – He was the easy winner of the Group 2 UAE Derby in late March before taking on the Kentucky Derby. In the Derby, he sat mid pack for most of the race and he did not have much of a response in the stretch as he finished 8th. He should like this 12 furlong distance and if he can sit closer to the pace, he could make some noise down the stretch.

2. Tale of Verve – It took this guy six starts to break his maiden and he was then entered in the Preakness Stakes. He surprised many by running second to American Pharoah at odds of 28-1, but he was seven lengths behind Pharoah. That race has led some to believe he has a chance to pick the pieces once again at big odds. He will need some pace to run at in this spot and there does not appear to be much.

3. Madefromlucky – He was under consideration for the Kentucky Derby, but was sent into the Grade 2 Peter Pan Stakes instead. He did well in the Peter Pan when he made a four wide move in the stretch and pulled away to win by a length. He did beat only four horses that day and he ran fourth and second to Pharoah in his two races previous to the Peter Pan. He could add value to the exotics at a decent price.

4. Frammento – He was a longshot in the Kentucky Derby and he ran like it. He finished 11th beaten 12 lengths that day. He had no pace to run at in the Derby and he does not appear to have any pace in the Belmont either. He is taking the blinkers off for this race, but he appears likely headed for a spot in the bottom of the superfecta at best.

5. American Pharoah – There is not much more to say about him. He has won six straight races after a poor debut including the Kentucky Derby and Preakness Stakes. He is clearly the horse to beat and he will probably be the controlling speed in this race. He is just a mile and a half from horse racing immortality if he can win this race. The obvious favorite here and the top choice.

6. Frosted – He and Materiality were the only ones to really make up ground in the Kentucky Derby. Frosted just missed third as the wire came before he was able to blow past Dortmund and he finished fourth by 3 1/4 lengths. He should not be nearly as far back in this race and he could sit just off the leaders to give him a good spot turning for home. Must be considered as a slight upset possibility.

7. Keen Ice – He is another closer that will need some pace to run at in the Belmont. He was able to move from 14th to 7th in the stretch during the Kentucky Derby. His efforts prior to the Kentucky Derby show that he was an underneath horse at best and that appears to be the case here as well.

8. Materiality – He started his career a perfect 3 for 3 entering the Kentucky Derby. He had a bad draw with the three post, which caused him to come off the pace. He was near the back of the pack midway through the race and rallied to finish sixth with some trouble. In the Belmont, he should not have the same trip and will be much closer to the pace, if not contesting it with Pharoah. He certainly has a chance in this race.

This race runs through #5 American Pharoah as expected. He is likely to be the controlling speed and has not done anything wrong this year. He may have pace pressure from #8 Materiality, but he has shown the ability to win coming from behind. #1 Mubtaahij is interesting because he should relish the distance and be closer to the pace than he was in the Derby. #6 Frosted will be worth a look if you are trying to beat Pharoah while #3 Madefromlucky looked nice winning the Peter Pan at Belmont on May 9.

Check back on Saturday night for a recap of the 2015 Belmont Stakes.