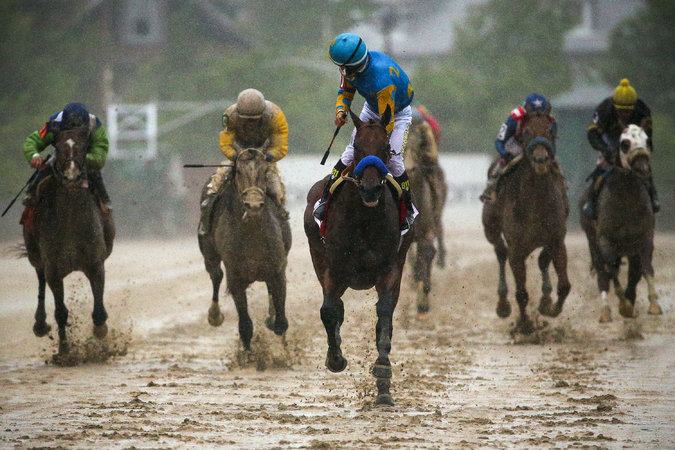 A torrential downpour that began about 15 minutes prior to the start of the Preakness Stakes did not matter. In fact, it probably helped the Kentucky Derby winner American Pharoah dominate his foes by 7 lengths in a gate-to-wire performance.

American Pharoah was not relinquishing that lead as he led the field through an opening quarter mile in 22.90 and an opening half mile in 46.49. He was still being tracked by Mr. Z and Dortmund was moved outside to track from third. Divining Rod sat fourth, Firing Line was up to fifth, Bodhisattva was sixth, Danzig Moon was seventh, and Tale of Verve was last of eight.

Entering the far turn, Mr. Z, Dortmund, and Divining Rod all began to make their moves, but American Pharoah was having none of that as he began to pull away when the straightened out in the stretch.

It was clear that no one was going to catch him at that point and he would end up winning by 7 lengths. Longshot Tale of Verve rallied to be second over Divining Rod in third and Dortmund held on for fourth place.

The remaining order of finish was Mr. Z, Danzig Moon, Firing Line, and Bodhisattva. The official chart can be found here courtesy of Equibase.

He is trained by Bob Baffert who will be making his fourth attempt at winning the Triple Crown. He previously failed to win it with Silver Charm in 1997, Real Quiet in 1998, and War Emblem in 2002.

American Pharoah will try to become the first horse to win the Triple Crown since Affirmed in 1978. Thirteen horses have won the Kentucky Derby and Preakness Stakes, but failed to win the Belmont Stakes. One horse, I’ll Have Another, did not race due to a foot injury discovered the day before the Belmont.

The Belmont will be run at one and a half miles on Saturday, June 6. It is called “The Test of a Champion” due to the taxing nature of a race at 12 furlongs. If American Pharoah does win the Belmont Stakes, he will be the 12th Triple Crown winner in history.