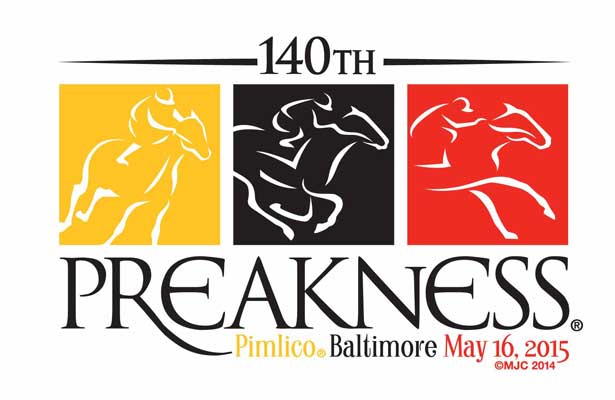 The second jewel of American’s Thoroughbred Triple Crown will be run on Saturday from Pimlico Race Course in Baltimore, Maryland.

This year a field of eight three-year olds will be going postward including the 2015 Kentucky Derby winner American Pharoah. In no surprise, he is listed as the overwhelming favorite to win the 2015 Preakness Stakes at 4-5.

The Preakness Stakes will be run at one mile and three-sixteenths (one sixteenth of a mile shorter than the Kentucky Derby) for a purse of $1,500,000.

The table below provides the entries for the Preakness Stakes as well.

1. American Pharoah – He has done nothing wrong since he finished fifth in his debut. He dominated the Grade 2 Rebel Stakes with a 6 1/4 length win and then throttled the Grade 1 Arkansas Derby field by 8 lengths. His Kentucky Derby was not nearly as impressive to his previous races, but he did get the job done. In this spot, he rates as the horse to beat and should get another great trip even from the rail.

2. Dortmund – Bob Baffert was a bit unlucky to draw the 1 and 2 post positions here, but at least he did it here and not in Kentucky. In the post race coverage, it was reported that Dortmund had a “slight bout of colic,” which was unknown to nearly every bettor. Whether that was the reason he did not win is a different story. He got away with easy fractions in the Derby and little pressure from Firing Line. From this spot, he will probably have to go to the lead again and could once again be the controlling pace in the race.

3. Mr. Z – What a bizarre tale Mr. Z has been the last two weeks. He was not seriously considered for the Preakness and former owner Ahmed Zayat even said so earlier this week. Well, he has been sold to Calumet Farm and will run in this race anyway. In any case, Mr. Z is up against it here despite his “troubled” trip in the Kentucky Derby. He will need to improve by leaps and bounds to be a threat to win.

4. Danzig Moon – He ran a solid race in the Kentucky Derby though he did not really improve his position much during the running of the race. He was bumped during the race, but he was not likely to challenge the top four with the pace they were running at. It is difficult to decide what to do with him knowing he was not a threat to the top three that return here.

5. Tale of Verve – He was the also-eligible for the Kentucky Derby, but was not able to get in by scratch time. He does have a win at this distance of 9.5 furlongs last time out, but that was against maiden company and he faced only 5 other horses. Perhaps this is the obligatory Dallas Stewart longshot entrant, but this horse is not the same caliber as the others here.

6. Bodhisattva – He won the local prep race for the Preakness Stakes here at Pimlico in the Federico Tesio. He went to the lead, was headed in the stretch, and then fought back for the win by a length and a half. He is the only horse in this field to even have a race over this track, let alone a victory and he also has the local connections. It still feels like a tall task for him here.

7. Divining Rod – There has been some chatter about this horse being the wise guy’s selection. He was second by a neck in the Grade 3 Sam F. Davis behind Ocean Knight in his first start on lasix. He was no match for Carpe Diem in the Grade 2 Tampa Bay Derby and won the Grade 3 Lexington Stakes with a perfect trip and ride at Keeneland five weeks ago. He should be able to work out another good trip, but the question is can he really threaten the top 3? The feeling here is most likely not.

8. Firing Line – He was right near the lead in the Kentucky Derby making sure that Dortmund did not get away from him. He pushed American Pharoah all the way to the finish line, but was unable to get the victory. This is an incredible post for him as he will be able to get a perfect trip. He seems likeliest of all to turn the tables on American Pharoah.

It is an unfortunate conclusion to come to in this race, but this really seems to be a three horse race. #1 American Pharoah is the horse to beat based on his body of work, but #8 Firing Line got an excellent draw all the way to the outside. Of course, we cannot count out #2 Dortmund to return to his winning way he showed in his first six starts. Who will finish fourth, or possibly higher if one or more of the favorites falter, is the real question.

Check back on Saturday evening for a recap of the 2015 Preakness Stakes.