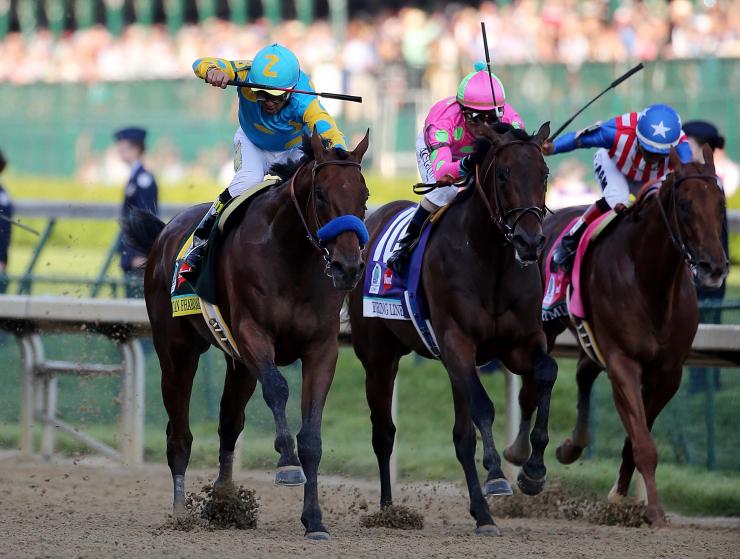 The 2015 Preakness Stakes draw took place on Wednesday afternoon at Pimlico Race Course in Baltimore, Maryland. It is in three days time that we will see if American Pharoah can win the second leg of the Triple Crown.

With only a field of 8 horses entered there should not be much traffic trouble in this race compared to the Kentucky Derby. The entries for the 2015 Preakness Stakes can be found in the table below.

Bob Baffert, trainer of the two inside horses including Kentucky Derby winner American Pharoah, was less than enthusiastic about the draw.

“I never like the 1 hole. That’s the first time I’ve ever drawn the rail here. I’ve been so lucky. You don’t like to see it, but if he’s the best horse we’ll find out,” Baffert said.

Meanwhile, Firing Line‘s jockey Gary Stevens was excited about drawing the outside post in the Preakness.

“I’m pleased not so much where I drew but where Dortmund and American Pharoah drew – 1, 2 – and Mr. Z outside of them,” Stevens said. “I expect Mr. Z to show more speed than he had in the Kentucky Derby with new ownership. Wayne’s going out for the kill; that’s going to make those guys make some decisions earlier in the race that they didn’t have the benefit of making in the Kentucky Derby. Now, I’ve got that benefit.”

As mentioned in Gary Stevens’ quote above, Mr. Z was sold by Ahmed Zayat to Calumet Farm in order to race in the Preakness. He will still be trained by D. Wayne Lukas.

The Preakness Stakes is carded as the 13th of 14 races at Pimlico on Saturday. The approximate post time is 6:18 PM Eastern Time with the eight three year olds going a mile and three sixteenths over the main track. Free past performances can be found here.

Check back in the next few days to read a preview and analysis of the 2015 Preakness Stakes.