The Future Of Horse Racing 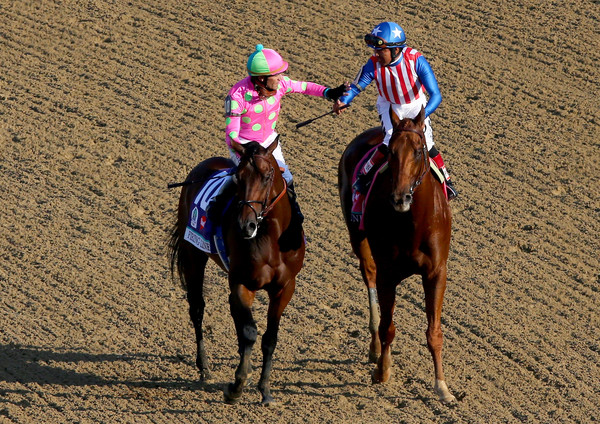 The Future Of Horse Racing

By all accounts, the 2015 Kentucky Derby was a rousing success. Handle for the Derby, as well as attendance, reached an all-time high. The TV ratings were the highest since 1992 with nearly 18 million viewers tuning in.

Beyond that, however, it is far from a rosy outlook for the Sport of Kings from this perspective.

As this author contemplates which (or even if) specific track follow in earnest, it dawned that there are question marks all around the nation about the future of horse racing. Here are a sample of questions that crossed the mind:

Dozens of other questions could be asked, but they all convey the same thing: worry over the sustainability of horse racing.

Take the racing circuit of California for example. In their recent history they have seen both Bay Meadows and Hollywood Park close. They have also seen the synthetic surface experiment (disaster at Santa Anita) come and go. They, like many other states, have worries over declining field size, but handle has been okay as of the most recent meet from Santa Anita.

Meanwhile, Illinois is suffering terrible in the horse racing industry. The political scene is a nightmare for slot’s given the state’s incredible deficit, the tracks of Hawthorne and Arlington Park constantly bicker over dates each year, and there is plenty of slots-fueled competition to the east to drive horses away. This does not even mention the drop in handle and field size at both tracks as well as a drop in foals in the state of Illinois.

The news is not all gloom and doom. Oaklawn Park in Arkansas consistently has big fields and high purses. They also tend to do so well that they raise purses multiple times each racing season. New Jersey, after several years of doubt in their ability to continue with horse racing, has also seen a boom in business.

Even Maryland is hopeful about the future, but there is some worry about whether they should continue racing at both Laurel Park and Pimlico or simply consolidate to only one track going forward.

New York has been plagued by the rash of breakdowns during Aqueduct Inner Dirt meet as well as incredibly short fields to start the Belmont spring meet. What is surprising is that New York is buoyed by slots revenue, which in theory should help field size.

Another curious thing about horse racing is it seems to be popular and thriving overseas. According to the Daily Racing Form‘s Steve Andersen, Japan handled $185 million and Hong Kong handled $233 million on Saturday, May 3. Those are incredible numbers and begs the question: what is US thoroughbred racing doing wrong?

There are a number of possibilities, not the least of which centers around the use of race day medication. The overseas jurisdictions do not allow it while the US does. Another issue is the lack of racing foals and the high number of tracks running races. More regional coordination would be helpful to stem the short fields, but that seems to be idyllic in horse racing.

In addition, the need for more fans to come to the track is desperately needed as most of the fans are older than 50. Simply put, they will not be around forever to continue supporting the sport.

These are contentious issues in the US, however, and thus complicates the future of horse racing. The trainers are in favor of race day medication. More racing dates are wanted because it means more purse money handed out and more money for the connections of the horse.

One thought on “The Future Of Horse Racing”