Unanswered Questions From The 2015 Kentucky Derby 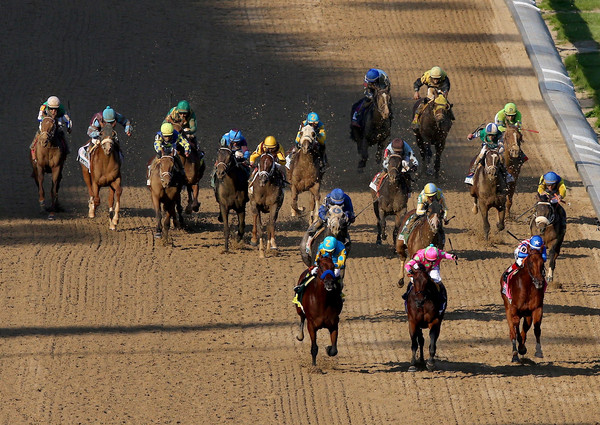 Unanswered Questions From The 2015 Kentucky Derby

The 2015 Kentucky Derby was an exciting race that saw American Pharoah defeat Firing Line by one length. There were even some lessons learned that could be applied in the future.

While the dust settles and the Preakness contenders are considered, there are still some questions that need to be answered even if it will not happen for many months (or possibly years).

Below are unanswered questions from the 2015 Kentucky Derby.

1. Were the Top Four Finishers that much Better than the Rest?

The top four finishers in the Kentucky Derby were American Pharoah, Firing Line, Dortmund, and Frosted. Those four were separated by 3 1/4 lengths while the rest were at least another 3 1/4 lengths behind.

It was an easy pace for the top three as they went around the track basically as the top three throughout the running of the Kentucky Derby. Frosted was the only one of the top four horses who had to close late and he barely missed third by a shortening head.

But were they really that much better than the rest of the field? Perhaps they are just head and shoulders above the rest of the horses in the Kentucky Derby, but that is probably not the case.

We will see over the next few months if the top four really were better than every other horse.

Coming into the race, we had a pretty good idea about Dortmund and American Pharoah, as well as several other horses such as Materiality, Carpe Diem, Upstart, and Frosted.

It turned out that American Pharoah and Dortmund were better than nearly everyone else in the Kentucky Derby.

Many have said this is one of the more talented and deep three year old crops in the last decade and Saturday’s Kentucky Derby results may just prove how good they are if the top four continue to dominate. The real question then becomes how the fringe horses, those who are considered good, but not yet at the same level as the top four, do later this year.

It will be an intriguing journey to watch, that is for sure and there will be plenty of opportunities in the fall for the three year olds to match up against older horses.

3. Is American Pharoah a Legitimate Threat to Win the Triple Crown?

In the immediate aftermath of the Kentucky Derby (literally the first 10 or 15 minutes after the conclusion of the race), many opinions are thrown around about whether or not a horse can go on and win the elusive Triple Crown.

This author falls in the latter camp that does not think he will win the Triple Crown. Of course, that is hardly an inclination of whether or not he will.

Secondly, he had a dream trip in the Kentucky Derby just off of Dortmund and Firing Line, but he did not have that huge burst of speed at the top of the stretch to pull away from his foes. Then again, maybe he was being saved by Victor Espinoza.

Third, the Belmont is called the Test of Champions for a reason. It is the third race in five weeks and it will be American Pharoah’s fourth race in eight weeks. There is a reason 13 horses have tried since 1978 and failed to win the Triple Crown. The grueling mile and a half journey will not be kind to him.

Again, none of this is a guarantee American Pharoah will not win the Triple Crown, but history is against him.

4. What do we do with the horses that finished well?

Given the slow pace of the Kentucky Derby, it is hardly a shock that few horses were able to close in the final quarter of a mile. On Saturday, there were only three horses that were really identified as being able to make up ground in the stretch.

Below is an image (courtesy of Blood-Horse) of the horses turning for home to provide an idea of where each horse was.

The most impressive of the three horses mentioned was Materiality, who came from way back in the field as seen in the photo. He did well to go from nearly last to sixth in the final quarter of a mile and he ran the final two furlongs in :25.61, according to the Daily Racing Form. None of that even mentions the poor start he had.

Frosted was the only horse to be shown during the live running of the race to have closed well. He just missed third place from Dortmund, but he was closing even prior to the final quarter of a mile. Between the six furlong and one mile calls, Frosted went from 15th to 7th and ran that quarter of a mile in :23.97.

He slowed down in the stretch, but still did well to make up the ground he did into such a slow pace. His final quarter was timed in :25.98.

The only other horse to make up ground was Keen Ice. Coming into the Kentucky Derby, most knew he would make one run and needed some pace to have a chance to hit the board. That proved to be the case.

He was immediately brought to the fence at the start of the race and continued to race near the back of the field throughout. At the top of the stretch he had five horses beaten and then closed to to finish seventh, losing by 8 3/4 lengths.

The obvious thinking here is that these horses will be prime candidates at Belmont going a mile and a half in the Belmont Stakes.

Just last year, Wicked Strong and Commanding Curve (the fourth and second place finishers in the Kentucky Derby respectively), were considered possibilities to win. The former finished in a dead heat for fourth and the latter was eighth.

In 2013, the second and third place finishers from the Derby, Golden Soul and Revolutionary, were the deep closers who hit the board in Kentucky. They finished ninth and fifth respectively in the Belmont Stakes.

In 2012, Dullahan closed to finish third in the Derby, but failed to do so at Belmont. He finished seventh as the 5/2 favorite that day.

Ice Box in 2010 was expected to do well in the Belmont Stakes. He ran fast closing second in the Derby, but failed at the 9/5 favorite in the Belmont by finishing ninth.

A lot of people think back to a deep closer winning the Belmont in Jazil (2006). That was nearly a decade ago. The problem with deep closers is two-fold. First, the pace of the race needs to be somewhat fast for a mile and a half. Second, they need to be able to get a mile and a half.

Deep closers can win the Belmont, they just need a lot of things to break their way in order to do it.

The reason for this is simple. There is no more cheap speed in the Kentucky Derby. In 2012, the last year without a points system, a horse named Trinniberg entered the Kentucky Derby. His prep racing coming into the Derby was the Grade 3 Bay Shore Stakes at 7 furlongs on the main track. He ended 2012 by winning the Grade 1 Breeders’ Cup Sprint.

There can still be unexpected speed in the race. Take 2013, for example, when Palace Malice shocked nearly everyone when he went straight to the lead under Mike Smith and tried to go gate-to-wire though he tired on the far turn.

It is clear that the Kentucky Derby points system is keeping sprinters out of the Kentucky Derby and that is not necessarily a bad thing. However, it has led to slower fractions and favorites winning the last three years. It is up to you to decide if that means the system is working.

Perhaps, and this is simply conjecture, is that more horses will be bred to go the classic distance of a mile and a quarter. It is still possible to have speed going 10 furlongs, though stamina will be needed to allow a horse to last the distance.

The Kentucky Derby points system will be fun to keep an eye on for the future and how it affects those who enter in Derby prep races. We may continue to see favorites or we may start to see a parade of long shots.

One thought on “Unanswered Questions From The 2015 Kentucky Derby”