What We Learned From The 2015 Kentucky Derby 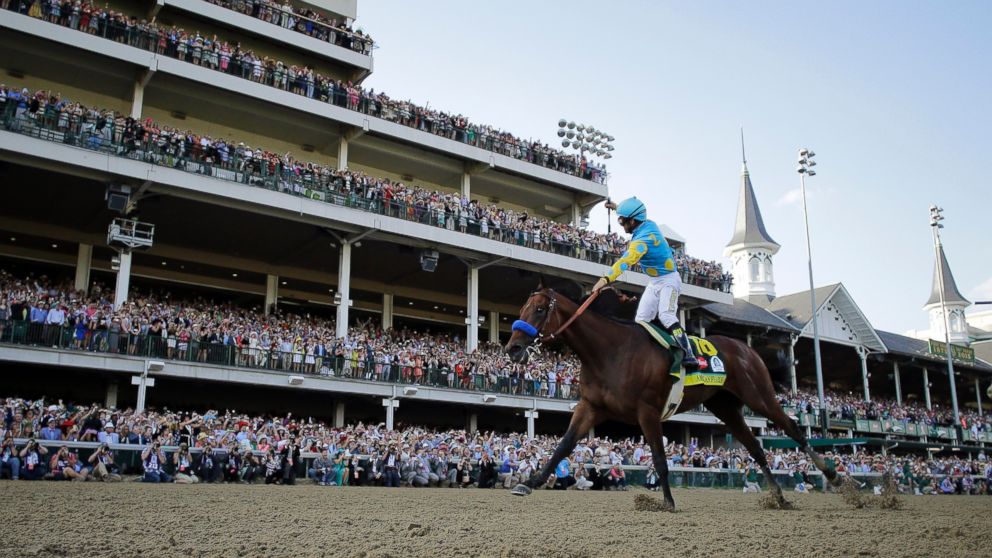 What We Learned From The 2015 Kentucky Derby

We are approximately one day removed from the 2015 Kentucky Derby and American Pharoah‘s one length victory, but there are still some lessons that we learned. There are also some questions that remain unanswered.

Below is what we learned from the 141st Kentucky Derby.

It seems so simple, but it was clearly true for the Kentucky Derby on Saturday. Dortmund led Firing Line and Pharoah through some dawdling fractions for the Derby. His opening quarter was in 23.24 and opening half mile went in 47.34.

For horses of that caliber, that is a cake-walk and makes them very difficult to defeat. The first quarter of a mile in 23.24 was the third slowest since 2000.

Now, it is clear why so few horses were able to make up ground. The leading trio set an easy pace and were able to stride home without much of a chance of fading back to the rest of the field.

2. Todd Pletcher Continues To Struggle in the Derby

This probably is not news to most avid followers of horse racing. After his three horses failed to win on Saturday, trainer Todd Pletcher now stands at 1 for 46 in the Kentucky Derby. His lone win was Super Saver in 2010.

What is amazing is that few trainers, if any, get more highly regarded two year olds than he does. Yet, he has a sub par record of leading those two year olds to Kentucky Derby success. He has had some good horses in the past, but this was regarded as part of his best crop of three year olds.

To be fair, Pletcher has not had the best luck when it comes to the Derby. In 2011, he had highly regarded Uncle Mo only to see that horse scratch prior to the Derby. Just a year earlier in 2010, Pletcher had Eskendereya scratch from the race and he probably would have been favored.

It will be difficult to back any Pletcher trained horse in the Kentucky Derby for a while, at least from this perspective.

3. Foreign Horses Have Yet To Make a Serious Impact

Despite all the hype regarding Mubtaahij’s chances in this year’s Kentucky Derby (full disclosure: this author had him as the top selection. Ouch.), he only managed to finish eighth.

If we go back to 2009 when Regal Ransom tried the UAE Derby to Kentucky Derby route, we will see that a serious trend has developed.

So what does all of this mean?

That foreign horses run decent races, but are not a serious threat to win the Kentucky Derby at this time. This could be due to the large amount of travel they have to do from Dubai (or wherever they ship from) to the United States. That can take a lot out of a horse.

Another reason could be the breeding. Most foreign bred horses are simply not bred to run on dirt. Yes, some do well over the main track (see Toast of New York or Giant’s Causeway), but by and large, most are not suited for it. It is the same way with American turf horses going overseas. They are usually trounced on turf in France, Great Britain, Dubai, or Hong Kong because they are not as royally bred to win on turf (and at longer distances).

That does not mean that it cannot change in the future. It very well could, but not for the foreseeable future.

4. The Win Odds Do Not Reflect Real Chances

This is a nice way of saying some people do not know the way odds work. The best examples that can be provided from the 2015 Kentucky Derby are in the form of Ocho Ocho Ocho and Mr. Z.

Ocho Ocho Ocho went off at odds of 26.10-1, which equates to a $2 win payoff of $54.20. That means that Ocho Ocho Ocho had roughly a 4% chance of winning, based on the odds. However, most people would agree that he had a far worse chance of winning the Kentucky Derby, meaning his odds were not in line with the expected payoff.

The other, and best, example is that of Mr. Z. While we can debate whether he should have been in the Kentucky Derby, his off odds of 36.60-1 did not provide fair value. Unless a person thought he had a 3% chance of winning (or better), then those odds were a steal. However, looking at his form coming into the Kentucky Derby, he had a sliver of a chance in this race, thus making his win odds disproportionately negative for those who bet him.

Seeing disproportionate win odds is nothing new, however. Call it the “Mine That Bird” effect. When Mine That Bird won the Kentucky Derby in 2009 at odds of 50.60-1, he shocked many with the victory (including this author).

What we saw in the subsequent years were ridiculous odds that were far too low. In 2010, the Kentucky Derby saw only two horses at odds of 30-1 or higher. In 2011, no horse went off at odds higher than 40-1.

There are two reasons for this “Mine That Bird” effect. The first is that people want to be on a long shot, any long shot regardless of the odds. If a horse is 30-1, people want to be able to say “I picked the 30-1 winner of the Kentucky Derby” and it does not matter if that horse should have been 50-1.

Of course, the favorites have won the last 3 years, which may produce more realistic odds in the future.

5. Luck Will Always Be Needed To Win the Kentucky Derby

This sounds intuitive, and it is, but this is worth repeating. Luck is a big part of winning the Kentucky Derby. A bad step here or there and you will have to take your horse out of the race.

For example, we saw Stanford, El Kabeir, and International Star all scratch prior to the race. The latter two were due to foot issues while the former was made to point to a different race. Had Stanford stayed in, perhaps the pace would have been quicker and allowed closers a better chance. We will never know.

Another reason why luck is a part of it is in the draw for the race. Todd Pletcher had bad luck when his two best horses drew side-by-side at two (Carpe Diem) and three (Materiality) in the gate. It is widely accepted that drawing to the inside is at a disadvantage due to the amount of horses that come over to the rail from the outside going into the first turn. The draw could have affected the pace of the race as well. Then again, maybe it would not have mattered at all.

No matter how you look at it, luck is and always will be part of the Kentucky Derby equation.

This is what we learned from the 2015 Kentucky Derby, but what questions still linger after the running of the 141st Kentucky Derby? Be sure to check back to find out.

One thought on “What We Learned From The 2015 Kentucky Derby”