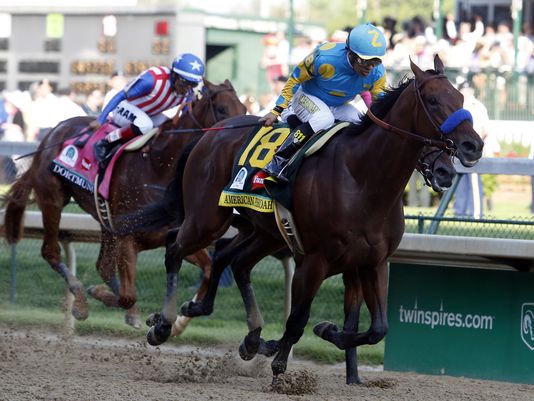 It was billed as a race that was trainer Bob Baffert’s to lose, but he did no such thing. American Pharoah was too much for Firing Line to hold off in the stretch as Baffert’s other entry, Dortmund, held on for third.

The race began well for the eventual top three finishers. Dortmund broke well and went straight to the lead while Gary Stevens was right next to him on Firing Line. Back in third by a length was American Pharoah who was being kept out in the clear by Victor Espinoza.

Bolo, Carpe Diem, and Danzig Moon all started well and were the next three horses in line. Mr. Z was seventh, Ocho Ocho Ocho was eighth, Upstart was ninth, and Tencendur was tenth, but only by about 4 1/2 lengths.

Itsaknockout was eleventh early, Mubtaahij was twelfth, Materiality was thirteen, Frosted was fourteenth, and War Story was fifteenth. The trailing trio were Frammento, Keen Ice, and Far Right with all of them about 14 lengths off the lead after a quarter of a mile.

The top three did not change as they went down the backstretch. Dortmund continued to lead and Firing Line continued to hang right on his flank. Meanwhile, American Pharoah continued to sit in the perfect spot just behind those two.

As they left the far turn and headed into the stretch, American Pharoah came around the leading duo to put in his bid to win the Kentucky Derby. He lead by a head at the stretch call and would slowly pull away from Firing Line to win by a length. It was another two lengths back to Dortmund in third, who barely held on for third over a fast closing Frosted.

El Kabeir, International Star, and Stanford all scratched leading up to the race. Tale of Verve did not draw into the race with his scratch time early on Friday morning. The entire results chart can be found here via Equibase.

Final running time for the one mile and one quarter race was 2:03.02.

This race, however, was all about the top three. It was trainer Bob Baffert’s fourth Kentucky Derby win after saddling Silver Charm (1997), Real Quiet (1998), and War Emblem (2002).

For jockey Victor Espinoza, it was his third Kentucky Derby win. He was aboard War Emblem in 2002 for Baffert and also won the 2014 Kentucky Derby aboard California Chrome.

American Pharoah went off as the 2.90-1 favorite and paid $7.80 to win, $5.80 to place, and $4.20 to show. He is the third consecutive favorite to win the Kentucky Derby. American Pharoah is owned by Ahmed Zayat, who has now his first Derby.

The second jewel of the Triple Crown is in two weeks at Pimlico racecourse in Baltimore, Maryland. There will probably be a mix of Derby horses and newcomers to challenge American Pharoah. The Preakness is at a mile and three sixteenths and will be held on Saturday, May 16.