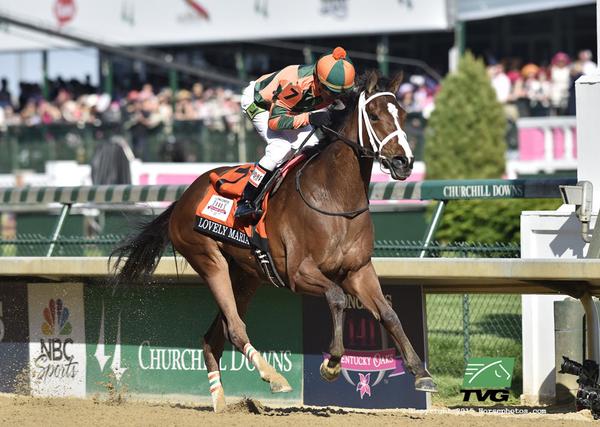 It was emotional for jockey Kerwin “Bo0 Boo” Clark in the immediate aftermath of his first Kentucky Oaks win. He was clearly happiness and shed tears of joy following his ride aboard Lovely Maria moments earlier.

“I’ve been riding for 40 years and I won my first grade I last month at Keeneland with this horse,” Clark said. “Then we win this race today. I am very blessed—blessed to have this horse, to have Larry Jones in my life and believing in me, to have (Brereton) Jones believe in me and stick with me.”

The win by Lovely Maria also gave trainer Larry Jones his third win in the Kentucky Oaks after Proud Spell in 2008 and Believe You Can in 2012.

The race began as expected with Condo Commando going straight to the lead while Angela Renee was close in two from the start as well. In third on the inside was Shook Up while Lovely Maria took up an excellent spot in fourth.

Forever Unbridled was fifth, Money’soncharlotte was sixth, Sarah Sis was mid-pack in seventh, and Include Betty was eighth. Puca sat in ninth 8 lengths off the lead, Birdatthewire was tenth, and I’m A Chatterbox was eleventh by nearly 10 lengths after a slow start. Stellar Wind was twelfth, Oceanwave was thirteenth, and Eskenformoney was last of fourteen.

The duo of Condo Commando and Angela Renee continued to duke it out up front while both Shook Up and Lovely Maria were both sitting behind them. The rest of the field seemed to have trouble making up any ground on the backstretch and turn, which would also be the case in the stretch.

On the far turn, Clark positioned Lovely Maria to go to the outside and she soon took over the lead from Angela Renee as the straightened out for the stretch run. Angela Renee tried valiantly to hang on, but was eventually overtaken by both Shook Up and I’m A Chatterbox, who came running on late to get third.

Back in fourth was Stellar Wind who was unable to make up the needed ground and Birdatthewire finished fifth. Angela Renee faded back to sixth while Oceanwave was seventh, Include Betty was eighth, and Condo Commando was ninth.

Sarah Sis was pulled up on the front stretch and vanned off. All indications are she will be okay.

The 2015 Kentucky Derby will be run on Saturday and you can find an in-depth preview here.