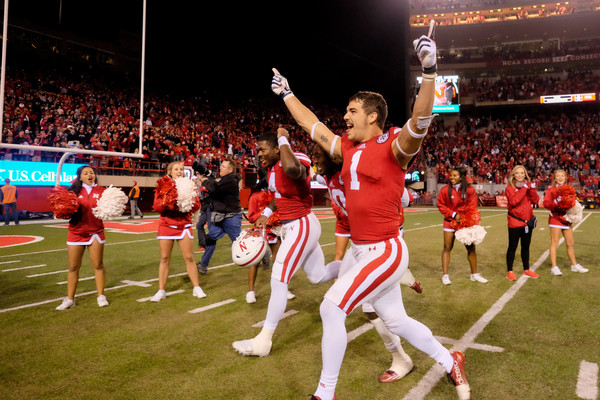 All fourteen teams were in action for the Big Ten this week and, what seems to be the norm, is a controversial ending.

Illinois made quick work of Purdue as they coasted to an easy 34 point victory. Wes Lunt went 19 of 33 for 169 yards and 3 touchdowns with no interceptions. The run game was incredibly effective with Ke’Shawn Vaughn gashing the Purdue defense for 180 yards and 2 touchdowns on 16 carries. Josh Ferguson had 133 yards on 12 carries while backup quarterback Chayce Crouch even ran for 45 yards. Illinois finished with 382 yards rushing on 41 carries.

Purdue had trouble getting much going with David Blough throwing for 174 yards, 1 touchdown, and 2 interceptions on 29 of 47 passing. He found 10 different receivers with DeAngelo Yancey leading the team with 5 catches for 51 yards and a touchdown. Markell Jones had 84 yards rushing on 14 carries. Purdue’s offense put up 263 yards and went 8 of 22 on third and fourth down combined.

Illinois (5-4, 2-3) sits one game from bowl eligibility with Ohio State coming to town next week. Purdue (2-7, 1-4) is eliminated from bowl contention, but head coach Darrell Hazell will be back in 2016. The Boilermakers face Northwestern next week on the road.

Northwestern defeated Penn State on a late field goal, but lost quarterback Clayton Thorson. His backup, Zack Oliver, did well in place of him going 11 of 24 for 111 yards with a touchdown and interception. Oliver also ran for another touchdown.

Justin Jackson had a massive game rushing the ball with 28 carries for 186 yards as the Wildcats rushed for 227 yards on 47 carries as a team. Nine different receivers caught a pass for Northwestern with Dan Vitale tallying 4 catches for 40 yards. Garrett Dickerson had 2 catches for 34 yards and Christian Jones caught 2 passes for 27 yards and a touchdown. Northwestern finished with 396 yards on offense and were 6 of 17 on third down.

Christian Hackenberg went 21 of 40 for 210 yards with no touchdowns and one interception. Receiver Geno Lewis threw a nice 32 yard touchdown pass in his only attempt of the game. Saquon Barkley ran for 120 yards and 2 touchdowns on 25 carries while Chris Godwin was easily the top receiver with 8 catches for 104 yards. DaeSean Hamilton had the 32 yard touchdown catch from Lewis and finished with 3 grabs for 50 yards. Barkley also added 6 catches for 50 yards. Penn State converted only 4 of 17 third downs and put up 362 yards of offense.

It was far from a pretty game for Wisconsin, but they came out with the victory on the road against Maryland.

Joel Stave went 15 of 24 for 188 yards with a touchdown and an interception while the surprise rushing leader was Joe Schobert on his lone 57 yard carry. Corey Clement did not make the trip while Dare Ogunbowale had 19 carries for 47 yards and a touchdown and Taiwan Deal had 42 yards on 9 carries. Unsurprisingly, Alex Erickson led the team in receiving with 5 catches for 83 yards. Ogunbowale also had a touchdown receiving to go along with 3 catches for 16 yards.

The Badgers were boosted by a nice 98 yard kickoff return from Natrell Jamerson and two interceptions by Tanner McEvoy. He now has 4 interceptions on the season. The Wisconsin offense had 305 yards and went a poor 3 of 13 on third down. They did convert both of their fourth down attempts.

DeAndre Lane led the team with 3 catches for 63 yards, but the next two guys caught the touchdown passes. DJ Moore had 2 catches for 51 yards while Levern Jacobs had 48 yards on 2 catches. Maryland put up 316 yards of offense and went 5 of 16 on third down.

Wisconsin (8-2, 5-1) still has a longshot possibility of winning the West Division, but will be more focused on getting to 10 wins. They have a bye before facing Northwestern at home on November 21. Maryland (2-7, 0-5) faces Michigan State on the road next week.

Michigan got back to their dominating ways even if they ruffled some feathers along the way.

Rutgers had trouble getting anything going on offense. Chris Laviano went 11 of 26 for 97 yards with an interception. Robert Martin had 81 yards on 10 carries while Josh Hicks went for 41 yards on 9 carries. Andre Patton led the team in receiving with 3 catches for 35 yards. Rutgers finished with 225 yards, went 3 of 13 on third down, and their lone touchdown came on special teams with Janarion Grant’s 98 yard kickoff return.

Michigan was up 35-16 when De’Veon Smith punched the ball in from 4 yards out. Harbaugh decided to go for two and Rudock was able to run it in near the pylon to make it 43-16, which caused some chatter and controversy.

Rutgers (3-6, 1-5) faces Nebraska next week at home with the loser eliminated from bowl eligibility. Michigan (7-2, 4-1) still has a chance to win the Big Ten East and play in the Big 10 Championship Game by winning out. They face Indiana next week on the road.

Iowa did not always play perfect against Indiana, but a win is a win and they are still undefeated.

The passing game was dominated by three receivers for Iowa. Matt VandeBerg had 5 catches for 68 yards, Tevaun Smith had 4 catches for 55 yards, and Jacob Hillyer finished with 4 catches for 53 yards. The lone touchdown pass went to George Kittle, who finished with 2 catches for 19 yards. Iowa went 7 of 14 on third down and put up 467 yards of offense.

Indiana had a good game against a solid defense, but it was not enough. Nate Sudfeld threw for 180 yards, a touchdown, and an interception on 16 of 37 passing. Jordan Howard ran wild with 174 yards and 2 touchdowns on 22 carries. Mitchell Paige had 2 catches for 51 yards while Ricky Jones caught 4 balls for 39 yards. Indiana put up 407 yards of offense while going a combined 10 of 19 on third down.

Iowa’s Desmond King continues to be an interception machine. He has recorded at least one interception in six of the nine games for Iowa and has 8 on the season.

Iowa (9-0, 5-0) will be focused on going undefeated, which is a strong possibility with their remaining schedule. They face Minnesota at home this week. Indiana (4-5, 0-5) has dropped five in a row and needs to win two of their final three to make a bowl game. They face Michigan at home next week.

Nebraska played in yet another close game this year, but, for once, this one turned out in their favor. It was a controversial ending on whether Brandon Reilly should have been called for illegal touching, but the Huskers will not care after how their season has gone.

Connor Cook had another good game passing going 23 of 37 for 335 yards with 4 touchdowns and an interception. His top target was none other than Aaron Burbridge with 10 catches for 164 yards and a touchdown. Macgarrett Kings had 4 receptions for 97 yards and 2 touchdowns as well.

Gerald Holmes ran for 117 yards and a touchdown on 22 carries as the featured back. Michigan State had 491 yards of offense and went 9 of 16 on third and fourth down. Their struggles on defense continue to be a worry and it caught up with them in this contest.

After missing last week, Tommy Armstrong returned with a vengeance going 19 of 33 for 320 yards with 2 touchdowns and 2 interceptions. He also ran for two scores while Imani Cross led the team in rushing with 98 yards and a touchdown on 18 carries. Jordan Westerkamp had 9 catches for 143 yards and a touchdown while Brandon Reilly had 3 catches for 87 yards and the big touchdown grab down the sideline. Nebraska had 499 yards of total offense and went 6 of 12 on third down (1 for 1 on fourth down).

Michigan State (8-1, 4-1) can still win the Big Ten East, as they have to face Ohio State and beat Michigan earlier this year. They face Maryland at home next week. Nebraska (4-6, 2-4) can still make a bowl game by winning their final two games. They face Rutgers next week on the road with the loser not making a bowl game for the 2015 season.

Ohio State did not have JT Barrett, but that was no problem as they relied on Ezekiel Elliott and Cardale Jones to lead the way.

Jones went 12 of 22 for 187 yards and a touchdown, but was also effective running the ball. He ran 12 times for 65 yards and a late touchdown to ice the game. Elliott was a workhorse with 26 carries for 114 yards and a touchdown. Jalin Marshall had 2 catches for 56 yards while Braxton Miller had a big 45 yard catch, but that was his only one on the night. Michael Thomas finished with 4 grabs for 39 yards and a touchdown. Ohio State had 376 yards of offense and went 7 of 16 on third down.

Minnesota got another good game from quarterback Mitch Leidner. He went 27 of 44 for 281 yards with 2 touchdowns and an interception. The rushing attack could not get anything going as they managed only 33 yards on 26 carries as a team. Shannon Brooks was the leader with 27 yards on 11 carries.

Minnesota (4-5, 1-4) still needs two wins to reach bowl eligibility. They face Iowa on the road next week. Ohio State (9-0, 5-0) faces Illinois next week on the road, still with a massive chance to defend their National Title.

Check back next week for a recap of Week 11 in the Big Ten.