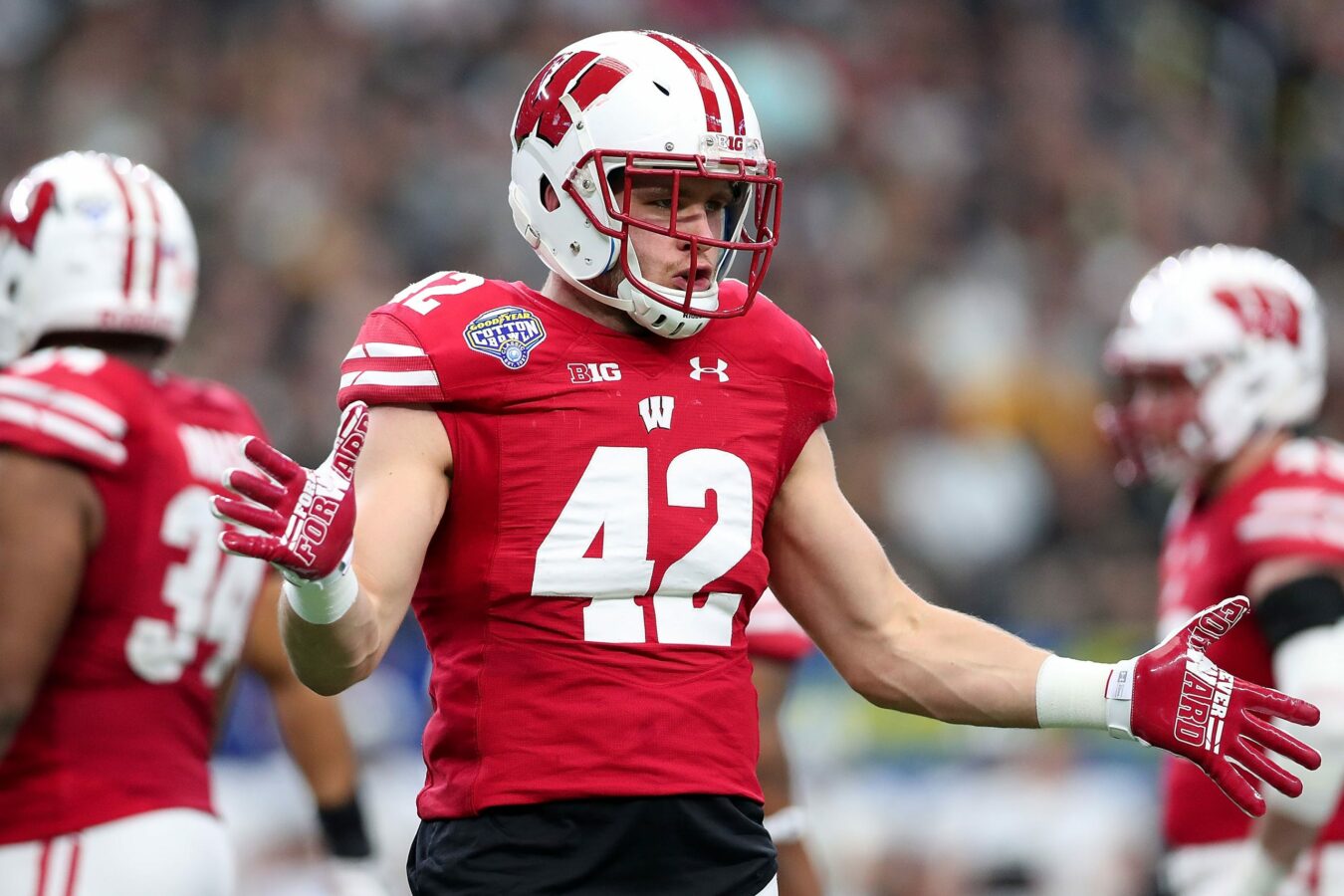 The Wisconsin Badgers have finished the 2016-17 season with a 24-16 win over the Western Michigan Broncos to end at 11-3 overall. It was another double-digit win season for the Badgers as 2016 marked the sixth time in the last 8 years they have won at least 10 games.

We will give a grade to each unit on the team as well as an overall team grade and a grade for head coach Paul Chryst. For a measuring stick, here is the midseason report card and we will include the midseason grade for each unit below. Let’s start with a quick glance at the results of each game for the Badgers.

2016 was not an easy year for Paul Chryst in his second season. He had to juggle two quarterbacks, a new defensive coordinator, and what looked like a daunting schedule. Looking at the entire season, he did well switching between Bart Houston (began the season as the starter) and Alex Hornibrook.

The hire of Justin Wilcox as the defensive coordinator already looks like a steal. The Badgers allowed 13.7 points per game in 2015 and saw that increase only marginally to 15.6. The yardage allowed per game did go up from 268.5 in 2015 to 301.4 yards per game. Still, the defense played well this year, but Wilcox has departed for the California Golden Bears’ head coaching vacancy. The Badgers will have their third defensive coordinator in three years for the 2017 season.

The schedule before the season looked imposing. They had LSU, Michigan State (away), Michigan (away), Ohio State, Nebraska, and the potential for a Big 10 Championship Game. The Badgers ended up facing 7 teams that were ranked in the top 15 at the time of the game for the 2016-17 and went 4-3 in those games. Granted, some of those teams were far from being top 25 material by season’s end, but the Badgers navigated the season well under Chryst.

Bart Houston began the season as a starter but was replaced in the Georgia State contest by Hornibrook. After that game, the duo split time behind center though Hornibrook was injured versus Minnesota and subsequently missed the Big 10 Championship game. Many pundits lament the two-quarterback system, but these two actually worked pretty well though they were far from game-changers.

We noted that on the midseason report card that Hornibrook had looked like the better of the two quarterbacks after five games. By the end of the season, it was far more even as Houston gained confidence and was more efficient. Houston finished the year with 1,245 yards (68.1%) with 5 touchdowns and 3 interceptions. After being benched versus Georgia State and not playing the next three games, Houston threw 70 passes and completing 52 of those (74%) for 718 yards with 3 touchdowns and 1 pick.

Hornibrook finished the season with 1,262 yards (58.6%) with 9 touchdowns and 7 interceptions. In the Badgers’ final eight games, he went 52 of 85 (61%) with 4 touchdowns against 1 interception (remember he missed the Big 10 Championship). He has some things to work on like his reads, throwing the ball into coverage, etc., but he has a bright future as long as he continues to improve.

It is not hard to see how the running game changed over the Badgers’ season. Over the first five games, Wisconsin averaged 161.6 yards per game on the ground. In the final 9 games, the Badgers averaged 226.1 yards rushing per game. Corey Clement easily led the team in rushing with 1,375 yards (4.4 yards per carry) with 15 touchdowns. In addition, the final 9 games saw Clement have at least 100-yard performances 7 times.

Dare Ogunbowale had a few big games against Nebraska (120 yards and a touchdown) and Illinois (103 yards) to finish with 506 yards (5.6 YPC) and five touchdowns. He also played a big role in the passing game with 24 catches for 208 yards and a touchdown, but it felt like he was a go-to receiver on third down for much of the year.

Both Clement and Ogunbowale are seniors, which means that freshman Bradrick Shaw could feature prominently in the future. He had 457 yards and 5 touchdowns on 88 carries (5.2 YPC). He did have some fumble issues, but his strength, power, and quickness could make for a scary sight in the next few seasons. He could be in a backfield with Taiwan Deal (164 yards rushing) and Pittsburgh transfer Chris James (690 yards rushing in two seasons) in 2017.

Wide receiver Jazz Peavy had a big impact in the rushing game as well. He was used almost exclusively on the end around to finish the season with 318 yards rushing and a touchdown on just 21 carries (15.1 YPC). He came up big throughout the season when called upon and he could see a familiar role in 2017.

As with any run-heavy Badger offense, the wide receivers are not likely to put up big numbers. There were some stars that emerged in Jazz Peavy and Troy Fumagalli. Peavy finished as the leading receiver with 43 catches for 635 yards and 5 touchdowns (along with the aforementioned rushing impact). Fumagalli had 47 catches for 580 yards and 2 touchdowns but bookended his season with very good performances against LSU (7 catches for 100 yards) and Western Michigan (6 catches for 83 yards and a touchdown). Both players are juniors and if either of them leave for the NFL, that would create a big void in the passing attack.

Ogunbowale was instrumental in the passing game, but he will move on as a senior. Robert Wheelwright caught 34 passes for 448 yards and 1 touchdown but is a senior. George Rushing had just 12 catches for 136 yards and was spotty throughout the season. With more consistency, he could be a possible #2 opposite of Peavy, but he has a ways to go to fill that void.

The offensive line had a slow start this season. Injuries and new quarterbacks hurt them. It took until after the Michigan game for the line to assert itself. The first five games saw the Badgers average just 3.8 yards per carry while that number shot up to 4.6 yards per carry over the final nine games. For the season, the Badgers averaged 4.3 yards per carry, which was better than 2015’s number of 3.8, but still less than the lowest output between 2009 and 2014 of 4.6. Tackle Ryan Ramczyk was named as a first team All-American. Ramczyk will move on to the NFL creating a massive void to refill.

The offensive line had allowed 8 sacks in the first five games but gave up another 16 in the final 9 games to make it 24 on the season. To be fair, the sacks are not always the fault of the line and both Houston and Hornibrook had a tendency to hold on to the ball too long from time to time. In 2015, the Badgers allowed 23 sacks. The offensive line did make good progress over the course of the season particularly in the running game.

There was a clear change in the offense between the Michigan and Ohio State games. It is worth mentioning that between those games was the Wisconsin bye week, which probably allowed them to re-focus the offense. The running game came alive after the bye week while Houston looked more efficient. The Badgers averaged 28.4 points, 382.1 yards, 203.1 rushing yards, and 179.1 passing yards per game. The total yardage was similar to 2015 (378.6 per game), but the emphasis was more on the run (150.3 yards rushing per game), which was not surprising given a new quarterback.

The offense will need to work on being far more efficient in the red zone. They had 58 red zone trips and converted 49 of those into points (84.4%), which ranked 63rd in the country. However, only 37 of those trips resulted in a touchdown (63.8%). This is a big area of improvement for the Badgers in 2017.

Only Biegel is a senior though Watt (a second-team All-American) or Edwards could bolt for the NFL after stellar campaigns. Chris Orr will also return after missing 2016 with a torn ACL.

Defensive ends Connor Sheehy and Alec James, both juniors, had similar seasons on the stat line. Sheehy had 27 tackles, 2.5 sacks, and 4 tackles-for-loss while James finished with 23 tackles, 3.5 sacks, and 3.5 tackles-for-loss. Also returning on the defensive line are Chikwe Obasih (31 career starts along with 22 tackles in 2016), and Olive Sagapolu (14 tackles and 1 sack).

The possibility of everyone outside of Biegel returning is tantalizing, but the NFL is a loud call this time of year. Still, the front seven should be a deep and talented group for the Badgers next season.

One clear area of regression as the season went on was in the secondary. Perhaps the Georgia State game was a sign of things to come for the final few games, particularly the Big 10 Championship. The Panthers were able to put up 269 yards through the air that day and a few other teams had some success as well. Northwestern threw for 277 (they played from behind the whole game), Purdue had going deep, and then Penn State gashed the back four with ease in the second half.

Tindall and Figaro will both be seniors in 2017 as will D’Cota Dixon (60 tackles and 4 interceptions) and Natrell Jamerson (mainly a return guy, but he did have 19 tackles and 4 pass breakups). Those four, along with others, will need to step up to replace Shelton and Musso. This group faltered down the stretch and in the pivotal second half of the Big 10 Championship Game versus Penn State. Look out to see if the secondary plays with a chip on their shoulder in the next year after how they finished the season.

The defense did play very well for most of the season. The secondary had documented struggles, but they did play well for stretches of the season. The linebackers led the way for this side of the ball and there were some stars we hope return in 2017 to make this another top defense in the nation.

The loss of Rafael Gaglianone in late September really hurt then, but after seeing the season play out, that is even more evident now. Gaglianone went 7 of 8 on his field goals and was a perfect 10 for 10 on extra points. Andrew Endicott replaced him and from the start was uneasy. He finished the season 13 of 19 with a long of 46 yards. He made 35 of 37 extra points, but even a few of those were barely inside the uprights. Gaglianone will be back in 2017, which will be a boost to the kicking game.

The punting game left some room for improvement. Anthony Lotti averaged 37.7 yards per punt and put 25 punts inside the opponent’s 20-yard line, but he had a few games where he struggled (see the Michigan game). P.J. Rosowski averaged 36.7 yards per punt and also handled kickoff duties. He had 79 kickoffs with 51 touchbacks and just one kick go out of bounds. Lotti was only a freshman in 2016 so he will have a few seasons left as Badgers to get better.

2016 was a very good year for the Wisconsin Badgers. Expectations were subdued with the loss of Joel Stave, Alex Erickson, Michael Caputo, and Tanner McEvoy among others. A new starting quarterback turned into two new starters at that position and both players handled it well.

The running game got off to a slow start but turned it on after the bye week. In turn, the quarterbacks performed more efficiently and the team was able to shake off back-to-back losses to Michigan and Ohio State to claim the Big 10 West. The defense had breakout stars in T.J. Watt and T.J. Edwards under new defensive coordinator Justin Wilcox while Corey Clement remained healthy to have a solid season.

Overall, it is hard to argue with the results produced by the Badgers. Many (including this author) thought 10 wins were out of the question, but the Badgers did one better than that and won their first Cotton Bowl.