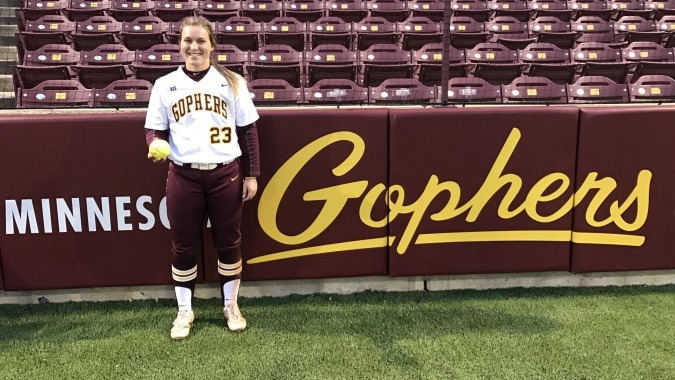 With April officially over, we are closing in fast on conference tournaments as well as the NCAA tournament. Week twelve had few surprises and we take a look at the top 16 teams in our power rankings as well as the next four teams.

We will start by providing last week’s rankings below. Please note the records in the table below are as of April 25.

Below is the eighth edition of our 2017 power rankings. Please note the records listed are through games as of May 2.

The Gators (#1 last week) had a three-game set on the road at Tennessee and took two of three. The first two were shutouts in which the Florida pitchers only allowed five hits. They dropped the final game 5-1 as the Vols got to Aleshia Ocasio for nine hits. After the second win, the Gators clinched the SEC regular-season title for a third straight season.

The Gators, like most teams, have a final week of games before their conference tournament. They start with a massive road game versus Florida State on Wednesday followed by North Texas for a three-game set over the weekend and Florida A&M on Sunday afternoon.

Arizona (#2 last week) stays in place after taking two of three from in-state foe Arizona State. The Wildcats won 4-3 in the opener in a back and forth game. Game two was a solid 5-2 win for the Sun Devils as they took a 5-0 lead before a late two-run home run by Katiyana Mauga. The final game was all Arizona with Danielle O’Toole allowing only one hit and Jessie Harper going 3 for 3 with 5 RBIs. The Wildcats are closing in on a Pac-12 title, but have one final series at UCLA this weekend, which will not be easy.

Oklahoma (#4 last week) swept Texas Tech over the weekend with the final two games being double run blowouts. The won the opener 4-2 with four different players batting in a run. The final two games were 12-0 and 14-3 wins with Shay Knighten going 5 for 7 with 9 RBIs and 5 runs scored. The Big 12 is on the line as they face second-place Oklahoma State three times between Wednesday and Saturday.

Minnesota (#5 last week) had another strong week going 5-0 with sweeps of North Dakota State and Purdue at home. Sara Groenewegen went 3-0 pitching 17 1/3 innings giving up six hits and 4 walks while striking out 34. She threw a no-hitter against Purdue in the series opener and improved to 25-2 on the season.

Kendyl Lindaman had a big week going 8 for 13 with 10 RBIs, 8 runs scored, 5 walks, and 3 home runs. The Gophers face Penn State on the road over the weekend with the Big 10 crown nearly in their grasp. They hold a two-game lead over Michigan in the standings.

The Seminoles (#6 last week) went 3-0 over North Carolina to complete a perfect ACC season. The Seminoles pitching came back to life as they allowed just six hits over the three games with Meghan King allowing three hits over 13 1/3 innings. Florida State’s regular season ends with a bang facing Florida at home on Wednesday and then traveling to face Oregon for a three-game set.

Texas A&M (#3 last week) went on the road to Kentucky and lost two of three. The Aggies pitching was not as effective as normal. They allowed at least six hits in each game and the defense committed three errors over the series. The two losses, combined with Florida’s two wins, cost the Aggies a (slim) shot at the SEC title. The final series for Texas A&M is at home to Tennessee.

Washington (#8 last week) went on the road and swept California. The Huskies relied heavily on Casey Stangel and Taylor Van Zee over the series as they combined for 9 RBIs. Washington has four games at home this week starting with Seattle on Wednesday and Stanford over the weekend.

Oregon (#9 last week) had an easy sweep of Oregon State winning the three games by a combined score of 22-2. The pitching and hitting were firing on all cylinders against Oregon State. The Ducks allowed only 8 hits while tallying 22 hits of their own. The potential for a great series looms this weekend as they welcome Florida State to Eugene.

Tennessee (#7 last week) welcomed Florida to Knoxville and they fell in two of the three contests. The first two games were tough for the offense as they were only able to muster five hits against the dominant Florida pitching. The third game was a breakthrough for the Vols as they won 5-1 thanks to a grand slam from Megan Geer. Taking a game from the Gators was good for the Volunteers and should keep their confidence up. They face Texas A&M on the road this weekend.

Utah (#10 last week) had a bit of a strange week. They were scheduled to play Wednesday against Weber State, but the weather forced a cancellation. They did not play over the weekend but did face Grand Canyon twice at home on Tuesday. Game one was over early as they put up 7 first-inning runs en route to a 9-0 win. Seven different batters recorded an RBI in the victory. Game two was not as easy with the game tied at zero going into the seventh. BreOnna Castaneda’s three-run shot ended the game while the duo of Miranda Viramontes and Katie Donovan combined to allow only one hit.

The Utes have a road trip to Corvallis to face Oregon State this weekend. They have an outside chance of winning the Pac-12 but need Arizona to falter and then the Utes need to sweep their remaining Pac-12 games.

The Tigers (#11 last week) went 4-0 with a win over Alabama State and a sweep of Mississippi State. The win over Alabama State was a 14-1 shellacking with four different Tigers recording multiple RBIs. Against the Bulldogs, Carlee Wallace had 5 RBIs and Casey Cooper went 4 for 7 with 3 RBIs. As the Tigers continue to move past the recent issues, they loom a threat going into the SEC Tournament and beyond. They face rival Alabama on the road this weekend.

UCLA (#12 last week) went 4-0 with wins over Cal State-Northridge and a sweep of Stanford. The offense was on fire as they scored 32 runs on 47 hits with Kylee Perez going 10 of 18 including a five-hit game versus Stanford. The Bruins have a tough weekend matchup against Arizona at home.

Louisiana-Lafayette (#13 last week) swept Coastal Carolina with all three games ending after five innings. The Ragin’ Cajuns won the Sun Belt regular-season title as a result of the sweep. Lexie Comeaux had a super weekend going 4 for 7 with 11 RBIs, 5 runs scored, and 4 walks. The Ragin’ Cajuns only hit two home runs over the weekend despite scoring 30 runs, which makes them an even more dangerous team going forward. Their final regular-season series is at Louisiana-Monroe over the weekend.

Baylor (#14 last week) took two of three from Oklahoma State at home. The Bears won 5-1 and 7-3 in the opening two games before dropping the final game 9-4. Kyla Walker did a fantastic job of getting on base going 8 for 10 while the duo of Ari Hawkins (5 RBIs) and Shelby Friudenberg (4 RBIs) brought the runs home. Baylor’s final regular-season series is against Texas. They will play one game at home and the other two at Austin.

It was a very good week for James Madison (#15 last week) going 5-0. They swept North Carolina in a midweek doubleheader and Drexel over the weekend. The sweep of Drexel gave the Dukes the Colonial regular-season title. Odicci Alexander threw a two-hitter against North Carolina and a three-hitter versus Drexel. Megan Good won 2 games against Drexel and is now 31-1. The Dukes face Elon at home over the weekend in their final regular-season series.

Michigan (#17 last week) move into the top 16 after going 4-0. They swept Indiana over the weekend allowing just two runs against the Hoosiers. They also took care of Western Michigan 8-0 on Tuesday in five innings with Tera Blanco pitching a three-hitter. Michigan has a final Big 10 series at Rutgers over the weekend before the conference tournament begins on May 11.

Ole Miss (#18 last week) had a good week going 3-1 a win over Jacksonville State and two wins against Alabama. The Rebels walked off against JSU with a 2-1 win before struggling against the Tide in the opener. They managed only one hit in that game before coming back to win the next two. They won 2-1 and 5-4 over Alabama with both ending via walk off. Ole Miss has been on the good side of the walk-off wins the last two weeks with five such occurrences. Can they keep those up in the coming weeks? They face Southern Miss on Wednesday and then go to Missouri for the weekend.

Alabama (#16 last week) lost two of three to Ole Miss as noted in the preceding paragraph. They had the lead in the seventh inning in both losses but saw the games slip away. Since their series against Missouri at the start of April, the Tide has gone 8-9 and have taken only 1 series, which was against LSU. Alabama’s slide is worrisome heading into the postseason and they will be at home to Auburn to end the regular season.

LSU (#19 last week) took two of three from Missouri at home. The magic number to win in that series was 3 as all three games ended with the winning team scoring 3 runs. LSU won 3-2 and 3-1 in the first two games while Missouri won 3-1 in the series finale. LSU will be a tough out for any opponent even if they are on the road. They will play at South Carolina this weekend.

BYU has been on a roll since late March when they lost three in a row to the combination of UCLA and Oregon. They have won 15 in a row and this past week saw them going 4-0 with all ending early due to the run rule. They scored 42 runs and gave up only five including 30 against San Diego (gave up one to USD). Rylee Jensen and Caitlyn Larsen Alldredge both recorded 5 RBIs in separate games with Jensen finishing with 9 RBIs for the weekend. BYU will take on Grand Canyon on Wednesday, Santa Clara over the weekend, and Utah State on Tuesday.

There were no additions or subtractions from the top 20 this week. The teams below have some work to do to be one of the top twenty, but could make a jump over the new week or two (in alphabetical order):

Below is the Week Eight Power Rankings table: