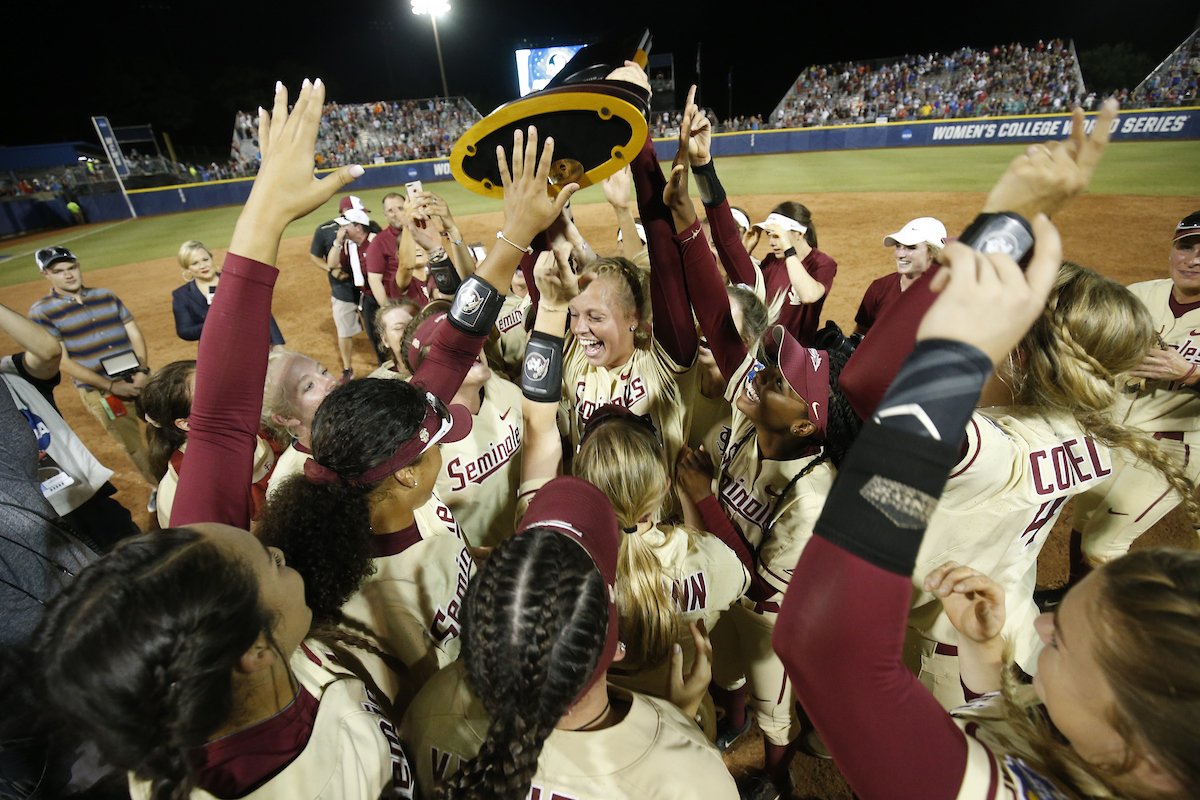 For the Seminoles, Tuesday night capped off an incredible WCWS run by winning six straight games following their opening day loss. By doing so, Florida State became the first division 1 team to accomplish the feat of winning the title after losing their opening WCWS game.

Florida State also became the first Atlantic Coast Conference team to win the championship. It was well deserved for a team making their 10th WCWS appearance. FSU was on the cusp of the title following Monday night’s 1-0 game one win via Meghan King’s complete-game shutout. That game also included this defensive gem from Jessica Warren.

There are no words for this double play by @FSU_Softball‘s Jessie Warren. #WCWS pic.twitter.com/7t7cLiqgRu

Game two started much differently as the Huskies took a 3-0 lead in the top of the first. The nervy beginning by Seminoles aided the Huskies, but the bottom of the first saw them cut the deficit to 3-2 via Anna Shelnutt’s two-run homer.

The @FSU_softball catcher blasts a TWO-RUN SHOT for the Seminoles! pic.twitter.com/f9yGNPbqYt

The Seminoles then put themselves in front for good with a three-run second inning. Elizabeth Mason’s single to right field and a fielding error by the Huskies gave FSU the 4-3 lead. Jessica Warren made it 5-3 with an RBI single after two innings.

The Huskies had a big chance in the top of the 4th inning as they loaded the bases with 2 outs, but a grounder ended their threat. The Seminoles made them pay for not capitalizing with two home runs. Mason hit a two-run blast followed by Warren’s solo shot and the Seminoles were on their way to the coveted championship.

NO DOUBT ABOUT IT! 🔥

Jessie Warren sends a DEEP SHOT over center to put @FSU_Softball up 8-3 over Washington! #WCWS pic.twitter.com/iMG360Dgxb

The final three innings saw Washington only put 1 runner on base. Meghan King once again went the distance with 7 innings pitched, allowing 5 hits, no walks, and striking out 4. King threw 34 1/3 innings, allowed one earned run, and recorded 4 wins and one save at the WCWS. She also set a new ERA record of 0.20 in the WCWS with at least 10 innings pitched. The Seminoles ended the season with a record of 58-12.

The drought continues for the Pac-12 in softball after dominating the early landscape of the sport. Arizona State remains the last team from the conference to win a national title as they did so back in 2011. Washington, who won their only title in 2009, finished the season at 52-10.