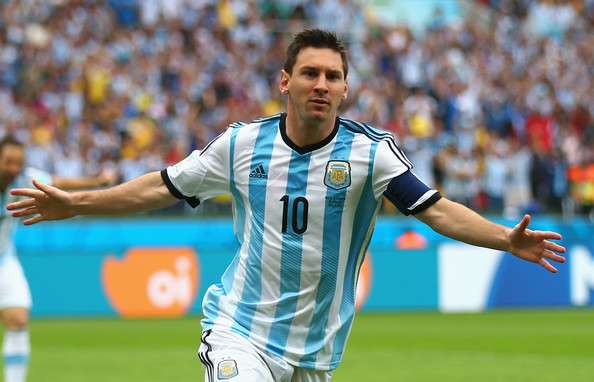 The FIFA World Cup begins on Thursday, June 14 when Russia takes on Saudi Arabia in Moscow to open the month-long tournament. We will take a stab at some predictions for the tournament starting with the group stage.

Below, we will make a prediction for each of the eight groups (A to H) and then also make two general predictions for the group stage.

1. (Group A) Uruguay will win all three matches – The first group is a favorable draw for Uruguay against Russia, Egypt, and Saudi Arabia. Uruguay is favored to win the group, but this calls for them to sweep their way to nine points. The biggest threats are Russia and Egypt who will presumably be battling for second.

For Uruguay, they will have to deal with a combination of Mohamed Salah and the awesome story of Essam El-Hadary, the 45-year-old goalkeeper for Egypt. Salah is nursing an injury going into the opening game for the Egyptians, which is against Uruguay. Even without Salah, the challenge is going to be difficult. Then there is Russia playing at home which will give them a boost. Still, Uruguay is in a position to not only win Group A but win all three matches.

2. (Group B) Spain defeats Portugal and wins Group B – Barring a 2014-like collapse, this group is down to Spain and Portugal. No offense to Morocco and Iran for not giving them a chance, but they were dealt a horrendous draw.

This game is on matchday one, which means the winner of this game will have one foot in the knockout stage. This matchup between the two neighboring countries will go to Spain as they roll into the tournament looking to avenge the disastrous campaign four years ago.

3. (Group C) France does not win the group – This French team is getting a lot of hype to win the World Cup. They have the talent with the likes of Antoine Griezmann, Paul Pogba, Kylian Mbappe, and N’Golo Kante among many others.

What is worrying about France is their desire and ability to finish games. The Euro 2016 Final against Portugal is exhibit A while poor results against Colombia (lost 3-2 after holding a 2-0 lead) and the United States have not looked good. The latter was particularly striking as the French towered over a young squad and yet only came away with a 1-1 draw.

Les Bleus take on Australia, Peru, and Denmark in this group, which seems like it would be favorable to them winning the group. However, Denmark will be a tough test and the longer France lets Australia and Peru hang around, the more confidence the underdogs get.

France can surely quell the unease with statement wins against all three, but there is something about this team that lingers. We still think France reaches the knockout stages in the end (and probably makes a deep run), but we predict they do not win the group.

4. (Group D) Group D will feature the most entertaining matches – Lionel Messi and Argentina lead this group, but that is not the only reason for this prediction. Nigeria has an odd way of testing Argentina. The Super Eagles have split the last four games against them and all four games featured at least four goals including the 2014 World Cup match Argentina won 3-2.

Then there is Iceland. Iceland has given up at least two goals in their last four international friendlies. This team can also score goals to provide some more excitement including at the end of games (see Euro 2016 against Austria).

Croatia, who got hammered 3-1 against both Brazil and Mexico at the 2014 World Cup, has two players embroiled in a scandal going into the 2018 Finals. One of them is Luka Modric, a man heavily relied upon for the team. Will that negatively affect their play? We shall see, but overall, this group should be fun to watch each match day.

5. (Group E) Costa Rica will get back to the Knockout Stages – Now this would be a surprise. Then again, what they did in 2014 was also a surprise. The Ticos not only made the knockout stages four years ago, but they won Group D by defeating both Uruguay and Italy while drawing with England.

This year features a group of Brazil, Switzerland, and Serbia. Getting past Brazil will be tough, but the Ticos can get past the duo of Switzerland and Serbia. Keylor Navas will be in the net, but also returning are the four players who scored for Costa Rica at the 2014 World Cup: Bryan Ruiz, Joel Campbell, Oscar Duarte, and Marcos Urena.

This group already knows how to defy the expectations placed upon them. They also know how to handle the pressure of being at the World Cup. We like Costa Rica to get past the group stage once again.

6. (Group F) Germany drops a point – The reigning World Cup winners tower over this group. Mexico, Sweden, and South Korea will be fighting for second. The key for all three is if they can steal a point (or more) from the Germans. On paper, this seems like a stretch. However, if we go back to 1998, only once has Germany won all three games in the group stage. That came in 2006 when they hosted the World Cup. Below is a look back at each game Germany has failed to win at the World Cup since 1998.

Another reason for this prediction is the lackluster performances from Germany leading up to the World Cup. They survived 2-1 against Saudi Arabia, lost 2-1 to Austria, lost 1-0 to Brazil, and drew 1-1 with Spain. Germany has their weird way of turning it on once they hit the field, but not without a bump in the road. Expect one of those in Group F though the Germans will still cruise into the knockout stages.

This team looks ready to pour in the goals and they finish the group stage against England with the winner of the game most likely to take top billing. A couple of goals against England could put this prediction over the top.

8. (Group H) Senegal Finishes Top Two – This group features Poland, Colombia, and Japan so the work is cut out for Senegal to advance. It is crucial they take points from Poland and Colombia (a win against either and a win against Japan should suffice). Sadio Mane will be the focus for them as the Liverpool man is coming off a 20 goal campaign.

Outside of Mane, they have the talent to compete and move past the group stage. Kalidou Koulibaly will be worth keeping on eye on as well. The last game is against Colombia is likely to decide which team goes through and which team goes home.

9. (General Prediction) The group stage will see at least 125 goals scored – Let’s be honest: We want to see goals. And a lot of them. That does not mean a 0-0 contest is boring or not entertaining. They most certainly can be, but we are going based on what has historically happened.

Since the World Cup expanded in 1998, there has been an average of 122 goals scored in the group stage. Three have featured more than 125 goals and we look for the same. This is not guaranteed though. Back in 2010, only 101 goals were scored in the group stage thanks to an abnormally low 25 goals on matchday one. 2014 saw that total nearly double to 49 for matchday one. 2014 was also the highest scoring group stage at 136 since 1998. Let’s hope this continues at the 2018 World Cup.

10. (General Prediction) Asia and Africa have a 2014 repeat – Let’s clarify what we mean here. In 2014, Africa had two teams to make the knockout stages while Asian teams were shutout. In fact, no Asian team recorded a win in 2014. We are predicting that two teams from Africa will go to the Round of 16 while no Asian team will advance to that point.

Let’s start with Africa: We have already called for Senegal to make the knockout stages, but there are other opportunities for the continent. Egypt could slip through Group A with Salah; Morocco has a tough Group B draw; Nigeria might also sneak through if results against Iceland and Croatia break their way; Tunisia faces a daunting task against Belgium and England.

That gives Africa three plausible knockout choices in Egypt, Nigeria, and Senegal. The same cannot be said for Asia. Saudi Arabia is in group A but considered a serious longshot. Iran is in Group B with Portugal, Spain, and Morocco. Australia has a chance though they need results against European sides France and Denmark. They also face Peru, which will not be easy.

South Korea is in Group F with Germany, Mexico, and Sweden. With the Germans, that realistically leaves one spot open and the Koreans will need results from the other two games. Japan faces a similar dilemma against Poland, Colombia, and Senegal. All five Asian sides are considered the longest shot in their respective group to win.

We expect a good fight from all five Asian countries. However, given their draws, this looks like another World Cup without an Asian side making the last 16.