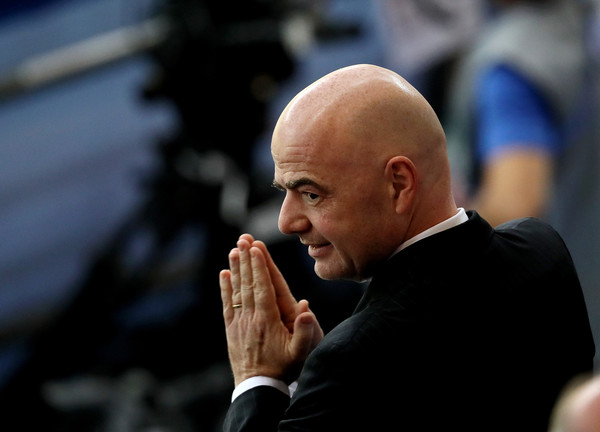 On Wednesday, Gianni Infantino was re-elected as FIFA president for a second term. He won the bid with no opposition with the FIFA council opting to back him by acclamation. Infantino had this to say as leader of the organization:

…”a new FIFA, an organisation that is synonymous with credibility, confidence, integrity.”

A link to FIFA’s key achievements between 2016 and 2019 can be found here. Outside of FIFA tooting their own horn, it is clear little has changed with FIFA from five years ago. Let’s start with this very election.

FIFA, claiming to be “more transparent”, did not even hold a vote for Infantino’s election. Sure, no one ran against him (why not?), but given recent events, holding a vote for this election would seem to be prudent to help build credibility. According to the New York Times (potential paywall), a statute was enacted just this week that allowed for the vote to be bypassed. Pretty convenient for a “transparent and credible” organization.

Speaking of votes, the Congress did test their voting and came up with this gem (per Rob Harris).

Not only did the voting test work improperly for some members (210 members voted, yet only 177 votes were deemed valid), 6 did not even know that this year’s Women’s World Cup was taking place in France. It begins on Friday. One could surmise this is a step towards transparency by even showing this blunder, but it does not really make FIFA look any better.

Here is another quote from Infantino’s address to Congress:

By “almost criminal” does he mean completely corrupt? Surely, he does. And doesn’t being corrupt mean being criminal? There’s no almost about it.

The part about being “an organization that cares about football” is true. Especially when it comes to money. According to FIFA’s own press release, the reserves increased to $2.745 billion while a new record in revenue was reached in 2018 with $6.421 billion as a result of the 2018 World Cup. If my assets increased by 50% over the previous cycle, I’d definitely care about the sport too.

The last part – the one about synonymity with credibility, trust, integrity, equality, and human rights – is a lot to unpack. FIFA hardly evokes positive thoughts and certainly none of the ones referenced by Infantino will be at the top of the list. One only needs to read through the Wikipedia entry on the 2015 Corruption Case to see how wrong that statement is.

We have now established that credibility, trust, and integrity are, in fact, not synonymous with FIFA. Let’s move onto equality and human rights.

What is FIFA’s definition of equality? The “unprecedented” 20% of FIFA committee members now being women? The requirement that there must be at least 1 woman per confederation on the FIFA Council? Or what about the five games being held in Paris, yet the advertisement shown below is from September 2018 for the men’s French national team?

The 2019 Women’s World Cup features $30 million in prize money distributed to the nations, which is double the amount paid in 2015. $400 million was distributed at the 2018 World Cup.

The world’s top female soccer player, Ada Hegerberg, has not played for Norway in two years as she battles for equality in the Nordic country. She has decided to skip this year’s World Cup, which will take some shine off the upcoming tournament.

Hegerberg’s fight is just one of several around the world for equal pay between the men’s and women’s teams including the United States and Australia.

In fairness to FIFA, the revenues generated from the men’s World Cup far exceed the women’s World Cup, which leads to the observed disparity in prize money. It makes sense from an overall revenue standpoint that men would get paid more. Moreover, the relatively recent introduction of the women’s tournament plays a part in the smaller revenues (2019 will be only the 8th edition of the Women’s World Cup).

Given the surging popularity and growth of the women’s game in the last decade, it would make sense for FIFA to provide more money. In fact, given FIFA’s strong desire to acquire money, they ought to grow the women’s game faster to reap higher revenues sooner.

Furthermore, increasing the prize pool to draw ought to bring more women into the sport with a higher wage. Higher prizes equals more competition, in turn leading to higher quality matches. This results in higher revenues/prize money and (hopefully) a virtuous cycle that leads to equality between the men’s and women’s games.

Why on earth did FIFA want to expand the 2022 World Cup from 32 to 48 teams given the extensive human rights issues? One can probably figure out the billion$ of rea$on$ to ignore all the crimes.

For those wanting background on the human rights issues plaguing Qatar, Tifo Football has a good video on the topic, which is presented below.

As much as Gianni Infantino would like us to believe that FIFA has evolved, it has not.