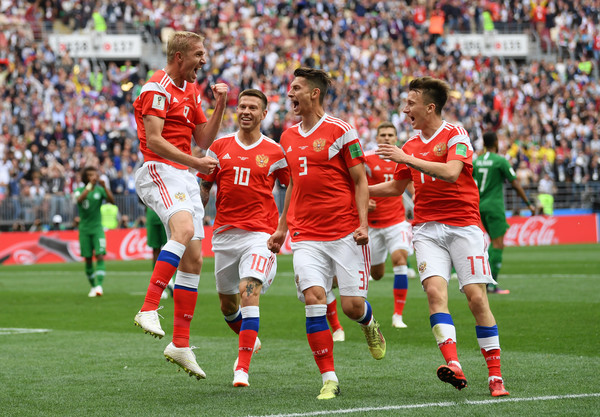 1. Winner: The viewers – Anyone who has followed the 2018 World Cup, even from afar, can see there has been quite the amount of drama. Late goals, spectacular performances, shocking upsets, this tournament really seems to have had it all. There was only one scoreless draw (France and Denmark) and every team scored at least two goals in the group stage. What could the knockout stages hold for us?

🤕 Most penalties awarded
❌ Most ever own goals
📒 Fastest ever yellow card
👴 Oldest player to appear in tournament
🏟 Longest streak without a 0-0
🎩 Oldest player to score hat-trick
⚽ First time in history all 32 teams scored at least 2 goals. pic.twitter.com/jdL9cnYzIs

2. Loser: Pre-tournament favorites – Spain, France, Argentina, Germany, and Poland (at least to get through Group H) all had some hype around them. Instead, Germany and Poland were eliminated in the group with Germany being so for the first time. Argentina needed a late Marcos Rojo goal to finish second. Spain and France have not looked convincing even if they did both win the group. That does make for good drama worth tuning in to.

3. Winner: Peru – Peru was very unlucky to have failed to qualify for the Round of 16. The missed PK against Denmark will haunt them as had that been converted and ended as a draw they would have gone through. Nevertheless, they won a lot of fans for their exciting style of play and would have been deserving of progressing.

The only real inclination of possible problems was the lead up to the tournament. The Germans stumbled in their friendlies and looked terrible, but those were just tune-up games. They made the semis of Euro 2016 and won the 2017 Confederations Cup, which built up their hype to potentially repeat in 2018.

5. Winner: Russia – The lowest-ranked team entering the World Cup started with back-to-back crushing wins to book their place in the Round of 16. Russia had a chance to win Group A had they at least drew with Uruguay, they were outmatched and finished second. Their reward is playing Spain, but the Spaniards have not looked dominant, Russia will have the crowd behind them, and this tournament has produced a few shockers.

6. Loser: Referees – While this author thinks that VAR has been solid, the real issue with its use is down to the referees and length of the reviews.  Whenever VAR is used, it has seemed to take far too long to make a determination. In addition, there are some clear cut calls that could be made on the field, yet referees defer to VAR to bail them out. While VAR is well-intentioned and has worked decently, the human aspect needs a bit more fine-tuning.

7. Winner: Fox’s commentators and analysts – Everyone has their preferred commentators when they watch sports, but Fox’s roster has been very solid. Anchored by JP Dellacamera and Derek Rae, all the commentators have done a good job calling the games and the analysts have been fantastic to listen to as they break down plays. Stuart Holden has been a bright spot from the viewpoint with his specific breakdowns for the viewers.

8. Loser: United States – Watching Panama and Costa Rica crash out after two games must be bothersome. Seeing Mexico move on to the Round of 16 must hurt more. But the worst part has to be the chaos that has erupted with the upsets and lack of a dominant team. Had they just drawn Trinidad & Tobago, they could be part of this carnage. Then again, who says the US would have advanced to the knockout stages? Overall, the US will be better down the road even if this is tough to watch now.

9. Winner: The last 16 teams – In most years this would be a cliché of “anything can happen.” Well, in 2018, this really is true for the last 16 teams left in the World Cup. There has not been a truly dominant team or any group of teams that have separated themselves. The favorites look vulnerable and upsets that few envisioned are actually happening (see South Korea v Germany). If a 16 can beat a 1 in the NCAA Basketball tournament during 2018, why not a surprise WC winner?

10. Winner: Asian Confederation – Four years ago, the four teams from AFC combined to play 12 games and finished with three draws and nine losses. They scored nine goals, gave up 25 goals, and all four teams finished last in their group.

Flash forward to this year and it has been a different outcome. Five teams qualified with Saudi Arabia, Iran, South Korea, and Japan all recording victories. Only Australia failed to win a game as they finished last in their group. Japan qualified for the Round of 16 as second-place finishers in Group H. It has been a much better performance all around from the AFC.

Bonus: Own Goals/Penalties – This could go as a winner or loser depending on your point of view. There have been 9 own goals in Russia, 24 penalties given, and 18 of those penalties have been converted, which are all World Cup records. Some may complain too many penalties have been given, while others may say they were correctly given.

Let’s hope the last two weeks are as entertaining as the first two weeks have been. Enjoy the knockout stages!