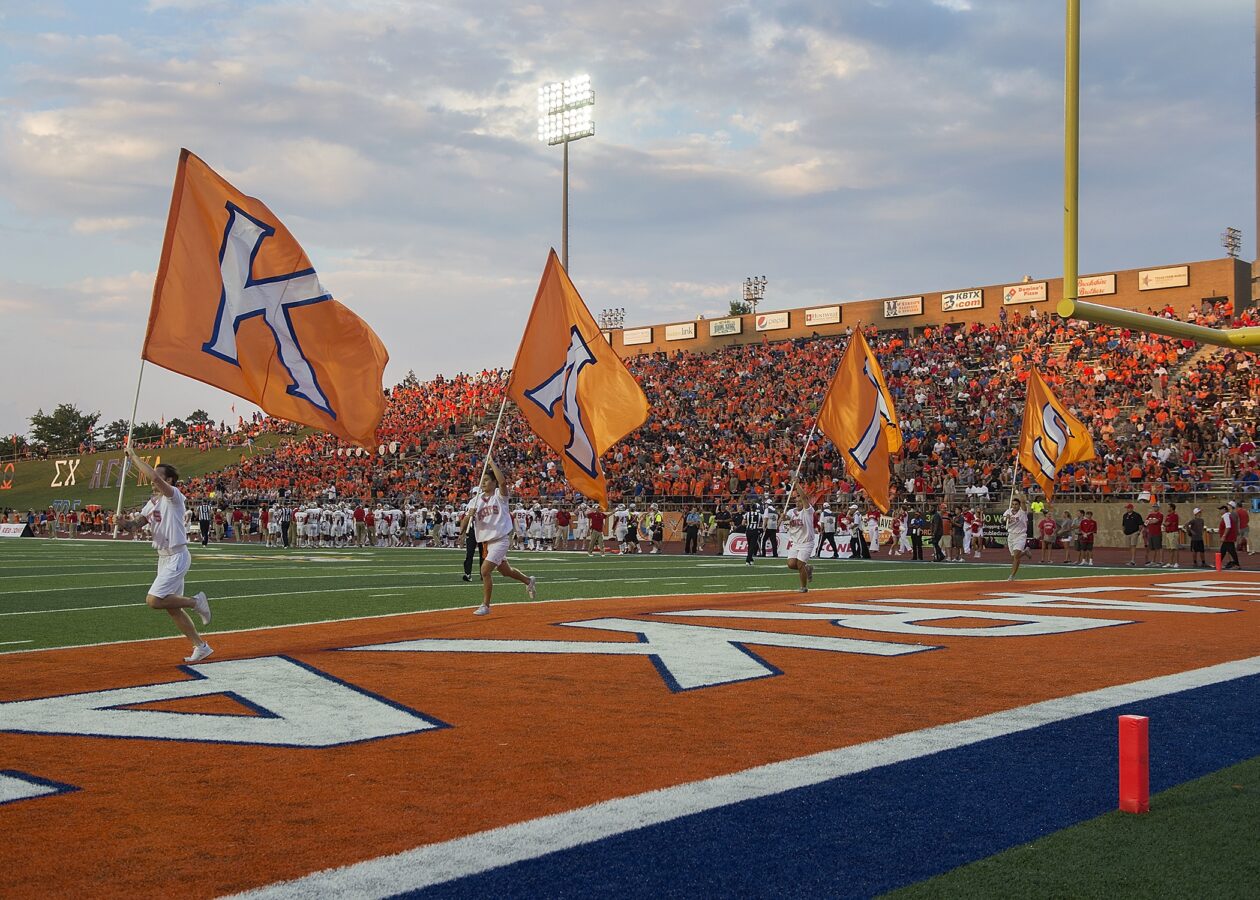 The latest from the WAC rumor mill is gaining traction. Earlier in October, Matt Brown reported that Southland Conference teams were being targeted by the WAC.

We addressed this briefly when we discussed what a renewed WAC football conference might look like. We described the Southland teams as unlikely because it makes little sense from the perspective of the schools, at face value.

Let’s take a closer look at that claim from the perspective of those four schools as well as Southern Utah, which was also mentioned as a WAC target.

Here is the proposed WAC membership for this article:

Below is a map showing the proposed WAC membership. Blue markers are current FCS members, the orange marker is for FBS team New Mexico State, and the green markers are for the five new members.

With the eight members, this would mean seven conference football games for WAC teams, which is an average of 3.5 road games per season. Below is a table showing the direct distance (as the crow flies) between the schools calculated using this website. Total mileage, average mileage, and average mileage for the 3.5 road games are shown below.

We cannot make much of those numbers on their own so we also calculated the current distance for the four Southland Conference members – Abilene Christian, Lamar, Sam Houston State, and Stephen F. Austin.

Now we can make some comparisons on the distance traveled. For Lamar, Sam Houston State, and Stephen F. Austin, this would cause travel to at least double, and this analyst *only looks at football*.

Abilene Christian’s change is a positive one at a decrease of nearly 150 miles in total. Based on football travel alone – a crude and simplistic measure – there is a strong case to be made for the Wildcats to potentially join.

Remember, the changes are based on 4.5 road games per year in the Southland Conference and 3.5 in the WAC. Even accounting for that, the travel within the Southland makes a better fit for three of the four teams.

As a reminder, the above only reviewed the distance for football. If the four Southland Conference teams went through with the move to the WAC, the travel would be even greater for non-football sports. In basketball, for example, the travel would extend as far north as Seattle (Seattle University) and as far east as Chicago (Chicago State). Below is a map showing all members of the WAC include the five proposed teams. The colors are the same as the first except non-football members are marked with a dark gray.

It ultimately depends on how the WAC views non-football programs like Seattle, California Baptist, and Chicago State, which has long had funding issues and as a member of the WAC that has only likely hastened their exit from the conference. The WAC may deem those programs outside their target geographic – depending on how much they are willing to focus on football.

Another consideration: stadiums. Yes, we harp on it quite a bit here but it most certainly is important. Remember, FBS teams need a requirement of 15,000 in home attendance over a two-year period, hence the need for big enough stadiums.

Wait, FBS? The last article and this one both assumed these teams would stay at the FCS level.

Indeed, however, the WAC still holds an FBS charter. That is worth more money than dropping to the FCS level due to the allure of TV deals.

Now the question becomes how much is that TV deal going to be worth because this group of mostly current FCS teams likely won’t commandeer as much as the former WAC conference would in this age. Another factor will be the post-pandemic TV rights that may or may not be depressed in value (this is truly an unknown here).

This also cuts the other way: will those FCS be willing to make the move to the WAC at increased travel costs for the potential of slightly more money? If they move up to the FBS level, they will have additional capital expenditures to expand the stadiums.

Finally, it is difficult to know how each school currently views its standing in the Southland. Any unease or unhappiness was not factored into the numbers above. Some schools may simply believe that the current arrangement is untenable and leaving for greener pastures is best – travel (and additional) costs be damned.

The Southland Conference has one of the best geographic setups in college football. Tight and compact, travel costs are kept to a minimum, which is quite desirable at the FCS level.

As shown above, the proposed arrangement in the WAC would cause three of the four Southland teams to see football travel more than double. The travel for non-football sports would rise in dramatic fashion as well.

We’ll restate what we said in the last WAC oriented article: these overtures make a lot of sense for the WAC. They need current football schools to build up the brand and sell to potential TV partners, regardless if it is at the FBS or FCS level.

However, for the majority of Southland schools – specifically Lamar, Sam Sam Houston State, and Stephen F. Austin as mentioned in the recent reports – the move would make no sense on paper. Travel would increase while revenue would likely not rise high enough to offset those increases in travel expenses and this analysis is based on ONE FEWER road game if they leave.

None of this is to say that schools always act rationally. The schools may be privy to certain information that the general public is unaware of such as dissatisfaction with the current situation, or may not enjoy the company of fellow conference members, or they may have some future sponsors willing to back the move with additional donations five or ten years down the road.

Like we said before, we look forward to seeing how the WAC football membership develops and we’ll be here to provide some analysis on it (and a lot of speculation too).

12/10/20 Edit: The distances in the tables previously listed nautical miles instead of miles for all schools. The tables have been corrected to reflect miles.

12/11/20 Edit: Added Google Maps to show current and future WAC football members as well as the future WAC membership in other sports.