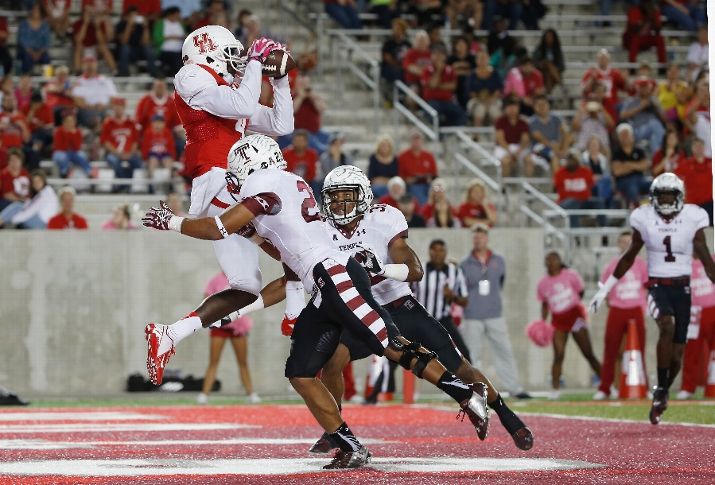 When most people look at the score between the Houston Cougars and the Temple Owls, they will assume it was an easy 31-10 for the Cougars. However, that was not the case, as the Owls committed four turnovers including a crucial at the doorstep of Houston’s end zone that would have tied the game at 17.

Temple’s P.J. Walker had a night to forget, as he accounted for all four of the turnovers with three interceptions and a lost fumble.

The game started with a three and out for Temple. Houston took their first possession down to the Temple two yard line, but settled for a 34 yard field goal from Kyle Bullard to take a 3-0 lead.

Walker’s long night started on Temple’s second possession with his first pass of the drive. On first and ten, he was picked off by Trevon Stewart who returned it 29 yards for a touchdown and a 10-0 Houston lead.

Houston had an opportunity to extend the lead to 13-0, but Bullard’s 32 yard field goal was no good. Walker completed a 72 yard screen pass to Jahad Thomas on the first play after the missed field goal to give the Owls first and goal at the 8. However, they had to settle for a 22 yard field goal from Austin Jones and were down 10-3 after the first quarter.

The first drive of the second quarter for Houston resulted in them extending their lead to two touchdowns. Kenneth Farrow ran in from 4 yards out to take a 17-3 lead.

Two drives later, Walker threw his second pick of the game. This time it was William Jackson who intercepted the pass, but Houston would not take advantage of the turnover and punted it back to Temple. Walker settled down considerably on the next drive and accounted for 72 of the 76 yards. His 39 yard touchdown pass to Keith Kirkwood made it 17-10 with 34 seconds remaining in the half.

Temple’s first series of the third quarter looked incredibly promising. Walker hit Thomas on another screen pass and Thomas made a nice cut back to get to the open side of the field for a 74 yard reception to the 2 yard line. On the next play, Walker kept the ball and tried to get into the end zone but the ball was knocked out by Steven Taylor, who also recovered the ball. Instead of tying the game at 17, Houston led 17-10 and Temple would not recover.

Temple’s next drive ended in disaster as the punt was mishandled and gave the Cougars the ball at the Houston 46 yard line. Greg Ward Jr. went 3 of 4 on the drive for 53 yards including the 7 yard touchdown pass to Deontay Greenberry to make it 24-10 Houston.

Walker threw his third interception of the game on the next drive when Howard Wilson picked him off at Temple’s 26 yard line. After a loss of 4 yards, Ryan Jackson atoned by running in from 30 yards out to make it 31-10 near the end of the third quarter.

Temple had a chance to close the deficit early in the fourth quarter. On fourth and one from the Houston two yard line, Thomas got the handoff but was swarmed immediately by Houston defenders and never had a chance to convert the fourth down, let alone score a touchdown.

Walker’s dismal concluded with him going 12 of 29 for 259 yards, 1 touchdown, and 3 interceptions. He was the joint leading rusher with 49 yards on 8 attempts, but he lost the crucial fumble when he was near the goal line in the third quarter. Jahad Thomas had 7 rushes for 49 yards.

Thomas also led the Owls, and the game, with 150 yards receiving on 3 catches. 148 of those yards came on two different screen passes.

Greg Ward Jr. had an efficient and effective night by going 29 of 33 for 272 yards with 2 touchdowns. He ran 13 times for 44 yards while Ryan Jackson tallied 75 yards on 18 carries and Kenneth Farrow added 52 yards and a touchdown on 18 carries. Jackson also had 3 catches for 59 yards.

Markeith Ambles caught 6 passes for 96 yards and Deontay Greenberry had 10 catches for 67 yards and a touchdown.

Temple (4-2, 2-1) suffered their first lost in the American and their next game is not easy. They travel to Central Florida next Saturday. Houston (4-3, 2-1) has a bye next week before returning to action on November 1 with a road trip to South Florida.

What Will the Future Hold for Chicago State After the WAC?