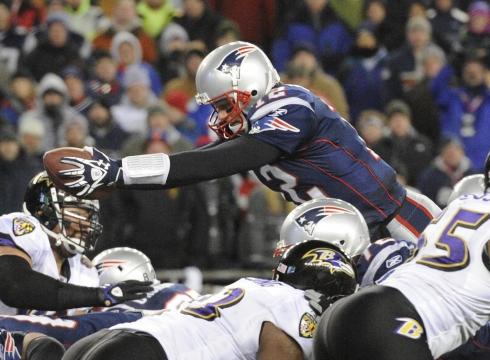 The Wild Card round was pretty dull until the final game between Detroit and Dallas. That game more than made up for lack of action with a flurry of missed calls and the penalty that was not midway through the final quarter. We can only hope that the Divisional Round produces as much excitement as the Lions-Cowboys game. After going 3-1 last week, let’s hope we can make it 4-0 this weekend.

What a game to start the weekend with. The top seed in the AFC, the New England Patriots, will be playing the Baltimore Ravens at home for the fourth time in the playoffs. Baltimore has a winning record in the first three games at 2-1. However, those games came in the 2009-10 and 2012-13 seasons. The latest game between the two teams was in Week 17 of the 2013 season where the Patriots won 41-7 on the road.

What makes the Ravens so good at beating the Patriots is they get pressure on Tom Brady. Doing so again would be advantageous once again for the Ravens, but they also need quarterback Joe Flacco to keep excelling on the road. Flacco owns a 10-4 record in the playoffs and has 7 wins on the road.

For the Patriots, they will need to protect Tom Brady to have enough time for him to find his targets. His primary target will be Rob Gronkowski, but if the Ravens take him out of the plan the Pats still have a myriad of other options.

Prediction: While the Patriots are favored by a touchdown, this game feels like it is a field goal difference. The Patriots find a way to win 24-21.

After last week’s expected win at home against Arizona, the Panthers travel to the Pacific Northwest to face the Seattle Seahawks. These two teams are familiar with each other as they have faced off during the regular season the last three years.

In 2012, 2013, and earlier in 2014, the Seahawks traveled to Carolina and won all three games. None of the games were high scoring with all three of them also being close until the end. The average score was 14 to 9 in favor of the Seahawks.

The one thing to note is that the Seahawks are now playing at home against the Panthers for this first time since 2010. The Seahawks won that game 31-14, but that seems like ages ago given how they have been built into a Super Bowl Champion. The Seahawks boast a 7-1 record at home this season while the Panthers have struggled on the road going 3-4-1.

Once again, this game figures to be defensive in nature, but the Seahawks are getting hot at the right time. They are winners of 6 straight and have yielded a total of 39 points in those 6 games. In only 1 game have they given up more than a touchdown. That happened to be on the road at Philadelphia.

Prediction: The combination of Russell Wilson and Marshawn Lynch (and how could we forget the defense?) will be too much for the Panthers. Seattle wins 27-3.

This game will be dictated by how well Green Bay quarterback Aaron Rodgers can play through his calf injury. He was clearly bothered in the season finale against Detroit and even missed some game time due to the injury. If he is at 90 or 95%, the Packers will be tough. However, we will not know who healthy he is until game time.

For the Cowboys, they look to continue their perfect road record for the season. They will be lead by DeMarco Murray, who led the NFL in rushing with 1,845 yards. He will be tested by the always dangerous linebacker Clay Matthews on the other end.

The Cowboys also have the dynamic Dez Bryant to catch passes from Tony Romo. Bryant was held to only 3 catches for 48 yards last week against Detroit, but he had 6 touchdowns in the final 3 regular season games.

The Cowboys are certainly not a popular choice after last week’s controversial game, but they have a shot if Aaron Rodgers is not healthy enough to make the passing game go.

Prediction: Rodgers is good enough to lead the Packers over the Cowboys, 28-21.

The Colts come into this game off a 26-10 win against a listless Cincinnati offense that struggled to do much on offense without A.J. Green. Now, they have to face the Denver Broncos on the road.

The two teams met in the season opener with Denver racing to a 24-0 lead before halftime and then led 31-10 midway through the fourth quarter. The Colts came back with two touchdowns in the in the final half of the quarter, but their rally came up short as they lost 31-24.

Andrew Luck had a solid game going 35 of 53 for 370 yards with 2 touchdowns and 2 picks. He also ran in for a score. However, another two interception game would probably cost the Colts once again. Facing him on the defensive side for the Broncos is Brandon Marshall who returns after a foot injury.

Meanwhile, the Broncos have a bit to worry about with their quarterback Peyton Manning. There is little doubt he is still one of the best quarterbacks in the league, but the final quarter of the season have some concerned. In the final four games he failed to throw a touchdown twice and had 6 interceptions. His game at Cincinnati was particularly worrisome because he had 4 picks compared to 2 interceptions and appeared to not have the same velocity. The game time temperature for Sunday will probably be in the 30’s, which may be an issue.

Prediction: Andrew Luck and the Colts manage to go into Mile High and win 31-28.

Based on the predictions above the conference championships would be: