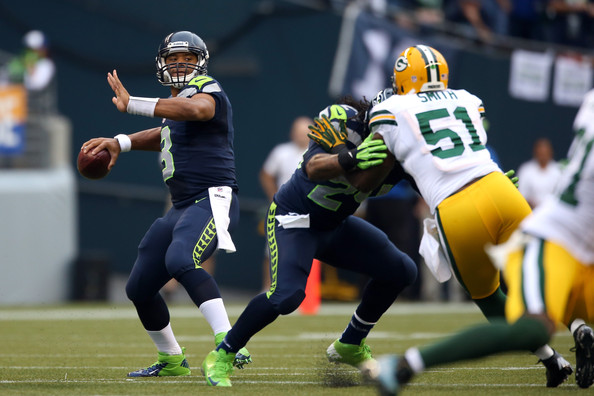 We sit just two football games away from knowing which two teams will be squaring off in Super Bowl XLIX. The first game will feature the Green Bay Packers at the Seattle Seahawks. The second game is the Indianapolis Colts at the New England Patriots. The Wild Card was good with a 3-1 record based on the predictions made here. The Divisional round was a perfect 4-0 based on the predictions made last week. Let’s make it 2-0 again this week.

The Packers escaped last week at home against the Dallas Cowboys with a 26-21 victory. That game, of course, was marred by the controversial call regarding Dez Bryant’s catch near the end zone. That would prove to be the difference.

Now the Packers have to contend with the Legion of Boom while Aaron Rodgers still has an injured calf. In last week’s game it was apparent that Rodgers was till feeling the effects of his calf tear. Rodgers went 24 of 35 for 316 yards with 3 touchdowns and no picks. Most impressive was his 13 yard touchdown strike to Richard Rodgers with 9:10 remaining in the game, which was a pinpoint throw between two defenders.

The Seahawks defeated Carolina 31-17 last week with a ridiculously impressive performance from Kam Chancellor. Chancellor was all over the field on Saturday night making tackles, nearly blocking field goals, and his 90 yard pick-six that sealed the victory.

Rodgers and the Packers will be up against the stingy Seattle defense and the rowdy crowd. They were crushed in week 1 when Seattle held the Packers to 255 yards of offense in a 36-16 win for the Seahawks. Marshawn Lynch had 110 yards and 2 touchdowns on 20 carries.

Prediction: Seattle’s defense, led by Chancellor and the Legion of Boom, will defeat the Packers 23-14.

The second conference championship will feature the red-hot Indianapolis Colts taking on the New England Patriots.

The Colts are coming of back-to-back wins against Cincinnati and at Denver. More impressively, the defense stepped and confused Peyton Manning. Manning went 26 of 46 for 211 yards and only 1 touchdown. Andrew Luck has shown he was well worth the 2-14 season the Indianapolis fans endured in 2011. He has made nearly every throw and can beat teams with his feet as well.

Next up for the Colts is Tom Brady. Brady went 33 of 50 for 367 yards with 3 touchdowns and one interception last week against the Ravens. He also scrambled for a touchdown. All of this was done with the Patriots gaining only 14 yards on 13 carries as a team for the entire game.

Of course, many will point to the week 11 meeting in which the Patriots ran all over the Colts in a 42-20 win. Jonas Gray had his breakout game with 201 yards and 4 rushing touchdowns, as the Patriots piled up 503 yards of offense. However, Sunday’s game will be a bit different. Gray has not featured much in the offense during the latter portion of the season for the Patriots while the Colts have surrendered only 99 yards a game in their two playoff games.

Prediction: Andrew Luck has struggled against the Patriots with 6 touchdowns and 8 interceptions in three games. The Colts have been crushed in all three games including the Divisional playoff game last year. Luck has thrown for over 300 yards in each game, but will need to take better care of the ball if the Colts are to reach the Super Bowl.

Despite how impressive Andrew Luck has been in his short career, this game feels like it will be another New England victory and appearance in the Super Bowl. The Patriots come out on top 38-28.

Based on the predictions above, Super Bowl XLIX will be between the Seattle Seahawks and the New England Patriots.