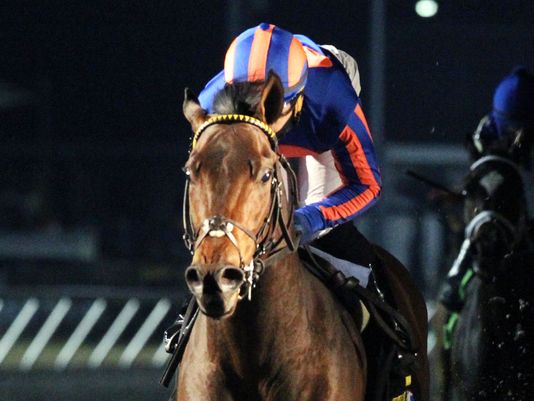 There may not be any Road to the Kentucky Derby prep races this weekend, but there is one stakes race that could have an impact on the Derby prep races. That is the listed John Battaglia Memorial Stakes at Turfway Park. This is the final local prep before the Grade 3 Spiral Stakes on Saturday, March 21.

The John Battaglia Memorial will feature a field of 10 three-year-olds going one mile and one sixteenth over the polytrack. The purse is $125,000 and is not part of the Road to the Kentucky Derby prep races.

Post time for the John Battaglia Memorial Stakes is scheduled for 8:40 PM Eastern Time and is carded as the sixth race. Free past performances can be found here.

1. Mini Cosmo (15-1 Morning Line) – He debuted late in his 2 year old season at Laurel Park when he won by 2 1/4 lengths. After his debut win he went into a restricted race at Parx finishing fourth by a length and a half and then stretched out to a mile while winning an allowance race. His last two races have been in open stakes competition, but he has failed to make an impression with fifth and sixth place finishes. He will need to run much better than his previous two races to have a chance of even hitting the board.

2. Candy Charger (30-1 ML) – He broke his maiden in his fourth start at Indiana Downs going a mile in the slop. He was shipped to Churchill Downs to face an allowance field where he was crushed by Dortmund, who has since become a top Kentucky Derby contender on the West Coast. His last effort was in the 96 Rock Stakes here at Turfway Park, but he was sixth beaten 15 lengths. He will like the stretch out back to two turns, but he will need to step up to contend here.

3. Royal Son (5-1 ML) – He started his career at Saratoga last summer and ran back-to-back second place finishes. After getting a four month break he showed up at Gulfstream Park where he won via disqualification to break his maiden. His last race was on January 31 at Tampa Bay Downs in the Grade 3 Sam F. Davis Stakes where he failed to do much running finishing 7th by 11 lengths. His last race is hard to decipher; was it the quirky Tampa Bay Downs main track or was it indicative of his ability in stakes competition? Tough read on him here…

4. Task Force Glory (8-1 ML) – He has been run exclusively on turf in his first six starts. He broke his maiden in his fifth start after three second place finishes in the four previous starts. Last time out at Gulfstream Park on January 15, he was placed second via disqualification. There is little concern of him stepping on the polytrack for the first time give his ability to run on turf. The main concern is his string of 4 second place finishes in 6 starts.

5. Ekati Told Me (50-1 ML) – He has two starts to his credit with one coming at Turfway Park last race. His debut was at Thistledown when he won by 2 1/4 lengths before facing stakes foes last time out. That was in the 96 Rock where he was crushed by The Great War while finishing 15 lengths back in fourth. He was sent off at 92-1 that day and he outran his odds. This will be his first start around 2 turns and could sneak into fourth place with some help. Pass on his chances to win the race.

6. Pepper Roani (12-1 ML) – This cleverly named son of Broken Vow was a maiden until his last start here at Turfway Park. He began on turf at Kentucky Downs (10th by 14 lengths) before transitioning to the main track at Churchill Downs (8th by 11 lengths). His third start was at Turfway where he began to improve going from fourth, to second, to third, to a win in the next four starts. There are concerns about his class, but the blinkers on last time really helped. Interesting horse at a price in this spot.

7. Milwaukee Mist (30-1 ML) – He broke his maiden going two turns here at Turfway Park in his debut. He beat the horse to his inside that day before cutting back in distance in the 96 Rock Stakes. Like every horse in that race, he was crushed by The Great War. He probably prefers a route of ground, but even that may not help him that much in this race.

9. Firespike (4-1 ML) – He also began his career on turf with a second place finish at Ellis Park in July. He was then shipped to Saratoga where he finished third before breaking his maiden by a neck in his third career race. The Grade 1 Breeders’ Futurity at Keeneland on dirt ended with a 7th place finish (by 14 lengths) and he subsequently returned to the turf. There he won his second race, a Florida bred stakes race before finishing 6th in open stakes competition. He recently won the OBS Championship at the Ocala Training Center over the synthetic surface. He rates a threat to the favorite, but will need to be on his A game to get in the victory photo.

10. Midnight Trace (8-1 ML) – Much like the horse to his inside, he began his career on turf. On December 27 he broke his maiden in his debut race at Tampa Bay by a length and a quarter. The next race was also on turf with a third place finish in a $75,000 optional claimer. There is not much worry about transitioning to the synthetic surface here and he should have a great trip off the leaders.

11. The Great War (1-1 ML) – We now reach the overwhelming favorite for this race. Like others in this race, he started his career on turf, but did so in Ireland. He won his first two career races before taking on Group 2 foes in the Norfolk Stakes at Ascot where he was fifth. His next four races were also in stakes competition, but he failed to win a race with his best placing in second. His final start in Europe resulted in his third victory before coming to the US for the Grade 1 Breeders Cup Juvenile on dirt. He finished 4th beaten 8 1/4 lengths before a freshening of 3 months. He returned to win the 96 Rock Stakes here at Turfway by 7 1/4 lengths. He can go gate-to-wire or rate right off the speed if necessary. He is squarely the one to beat here.

This race runs through #11 The Great War and hit is hard to see him losing. With such a heavy favorite expected, the tendency is to look for value. #10 Midnight Trace could offer some value if the favorite falters at 8-1 on the morning line. The Graham Motion trainee should be in a great spot throughout the running. #9 Firespike offers little value, but has a big chance to hit the board as does #4 Task Force Glory. It is tough to completely ignore horses who consistently hit the board. #6 Pepper Roani is an interesting 12-1 shot that clearly improved last time out with blinkers on for the first time. For the biggest value #5 Ekati Told Me and #7 Milwaukee Mist could be used to add needed value to the ticket if The Great War does win.

Remember to come back on Saturday night to see the recap of the 2015 John Battaglia Memorial Stakes.