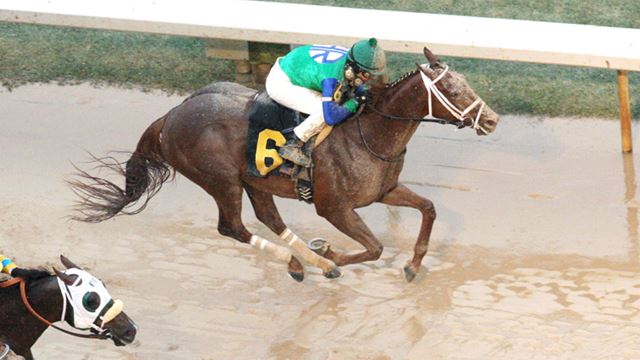 The sloppy track was not a problem for Far Right as he won his second straight stakes race at Oaklawn Park. Just as he did in the Smarty Jones, Far Right went to the far left on the rail to get up and win by three quarters of a length.

The race started with Mr. Z intent on getting the lead from the far outside post. Pressing him throughout much of the race was Hillbilly Royalty with three lengths back to Kantune, Phenomenal Phoenix, and Bayerd. Behind that trio was Bold Animaux and Private Prospect while the trailing trio was Bold Conquest, Far Right, and Majestico nearly 10 lengths off the lead.

Mr. Z and Hillbilly Royalty continued to duel for the lead through fractions of 23.61 for the opening quarter, 47.90 for the opening half mile, and 1:14.33 for the first six furlongs. The Truth Or Else made a strong, yet wide move on the far turn to get into contention and eventually took the lead by a head at the stretch call.

To his inside were Mr. Z and Hillbilly Royalty, both of whom were still battling on. Not far of the three leaders was Far Right who ducked towards the rail to make his move. Bold Conquest was still in contention while the rest of the field was well out of it and had no chance of making an impact.

It took nearly the length of the stretch, but Far Right was able to close in the slop to win with The Truth Or Else finishing second by a nose over Mr. Z. It was another three lengths to Bold Conquest in fourth and Hillbilly Royalty in fifth. The order of finish for the rest of the field was Majestico, Private Prospect, Bayerd, Phenomenal Phoenix, Kantune, and Bold Animaux.

Unlike the Risen Star and Fountain Of Youth Stakes on Saturday, the Grade 3 Southwest Stakes distributed points of 10, 4, 2, and 1 to the top four finishers respectively. Far Right now has 22 points, The Truth Or Else has 6 points, Mr. Z now has 14 points, and Bold Conquest has 7 points. The points are used to determined who will make it into the Kentucky Derby starting gate.

The Road to the Kentucky Derby has a break next weekend and returns on March 7 with three stakes races. The Gotham Stakes at Aqueduct, the San Felipe at Santa Anita, and the Tampa Bay Derby at Tampa Bay Downs will all be run on Saturday, March 7. All three of those races will be at one mile and one sixteenth with each offering 50 points to the winner, 20 points to the runner up, 10 points to the third place finisher, and 5 points to the fourth place finisher.

The next Kentucky Derby prep race at Oaklawn Park is the Rebel Stakes on Saturday, March 14. The Rebel will also feature a 50-20-10-5 point distribution and be run at a mile and one sixteenth.