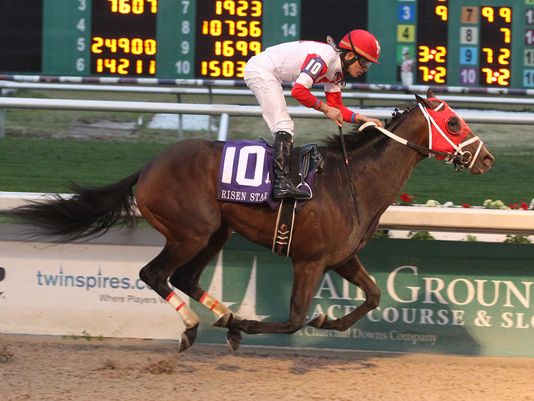 International Star was taken to the rail by jockey Miguel Mena entering the stretch to save ground and it proved to be difference. In the process of winning the Grade 2 Risen Star, International Star proved he loves the Fair Grounds main track, but more importantly he stamped his ticket to the Kentucky Derby.

The race began with St. Joe Bay going to the lead from his rail position with Hero of Humor pressing the pace as well. Tiznow R J was third by 2 lengths, Big Big Easy was fourth by three, and Bluff was in fifth about four and a half lengths off the lead. International Star was sixth, War Story in seventh, Imperia was in eighth, and Keen Ice was the trailer approximately 10 lengths behind the leader.

International Star would hold on to win by a length over War Story. Keen Ice used a strong burst to grab third over St. Joe Bay. The remaining order of finish was Imperia, Bluff, Tiznow R J, Big Big Easy, and Hero of Humor. The running time for the one mile and one sixteenth was 1:43.82.

There was an objection claimed by Kent Desormeaux of War Story regarding the first turn, but it was disallowed by the stewards upon further review.

International Star paid $9.60 to win, $4.60 to place, and $3.40 to show. He was ridden by Miguel Mena and trained by Mike Maker. He also earned 50 points for his victory, which gives him a total of 71 points and on top of the Kentucky Derby Points leaderboard.

War Story earned 20 more points for finishing second, which gives him a total of 24 thus far and places him fifth overall. Keen Ice earned 10 points to give him 12 points total and St. Joe Bay earned 5 points for his fourth place finish to give him 6 points.

The Road to the Kentucky Derby continues on Sunday at Oaklawn Park with the Southwest Stakes.