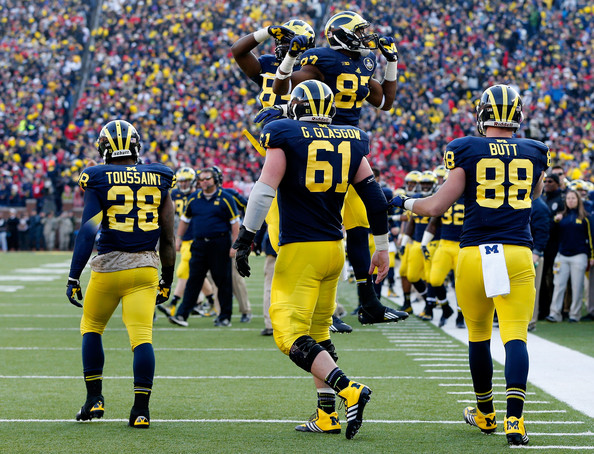 A year after being arrested for drunk driving, Michigan Wolverines offensive lineman Graham Glasgow has run into trouble again. Glasgow has violated his probation stemming from that drunk driving charge.

A Breathalyzer test given to Glasgow on Sunday (March 15) showed he was at a .086. Glasgow admitted to drinking and part of his probation was to not consume alcohol.

Glasgow was sentenced to 12 months probation on July 14 of last year as a result of his drunk driving arrest on March 15 of 2014. Part of the sentence included random drug and alcohol tests.

Glasgow was expected to battle with Patrick Kugler for the starting center spot vacated by Jack Miller who decided to leave the Michigan program. Kugler has seen action in only 1 game as a Wolverine.

Glasgow was suspended for the season opening game against Appalachian State in 2014. He subsequently started the next 11 games for the Wolverines. In 2013, Glasgow started all 13 games with nine starts coming at center and the other four starts coming at left guard.

It will be interesting to see how Jim Harbaugh handles this off the field distraction and the sudden offensive line issues that have come about in the last week.

“We have been made aware of Graham’s probation violation and he has been suspended. Graham will be subject to punishment through the judicial system, the student-athlete alcohol policy and the Michigan football program.”