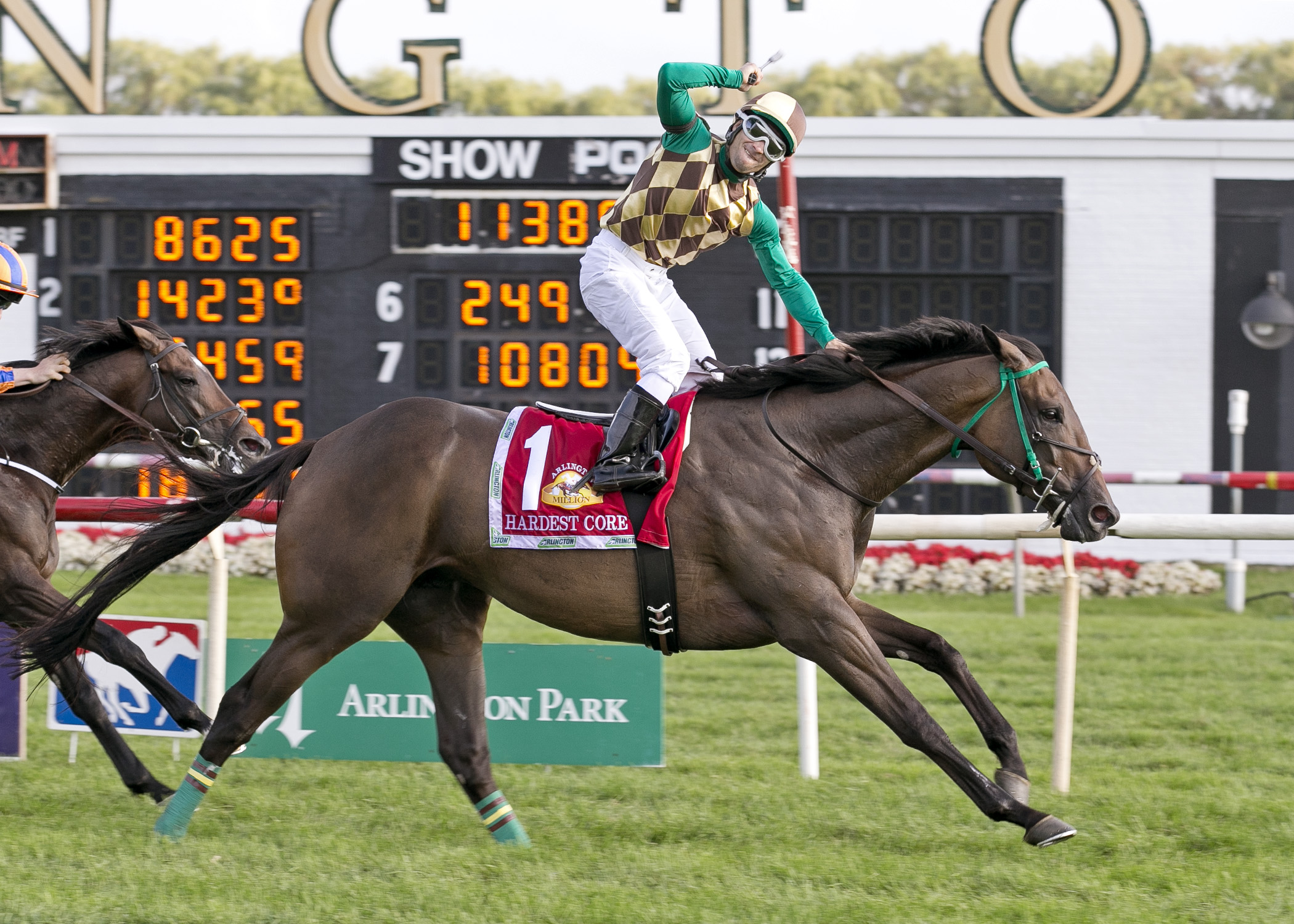 The stakes schedule at Arlington Park for 2015 is a stark reminder of the challenges facing horse racing in Illinois.

That is not the only bad news. 7 other stakes races have seen their purses cut. The Grade 3 American Derby, Grade 3 Arlington Handicap, Grade 3 Modesty Handicap, and Grade 3 Stars and Stripes have all been cut by $50,000. The first three races will now be worth $150,000 while the latter is worth only $100,000. All four of the stakes races remain part of the Million Preview Day that is scheduled to take place on Saturday, July 11.

While Arlington’s centerpiece of the season has not seen any purse reductions, it could only be a matter of time before it happens. One point of contention is the Grade 3 American St. Leger for 3-year-olds and upward at 1 11/16 miles on turf. It carries a purse of $400,000 and is designed to attract marathon runners from Europe. The issue is that horsemen feel the purse could be disbursed for other races. Given that the American St. Leger was newly minted as a Grade 3 race in December, the horsemen’s grievance will probably fall upon deaf ears.

The horsemen’s plight is only indicative of the larger issues in Illinois. They will fight for every dollar in Illinois because there are not as many dollars as there used to be. The casino money that buoyed purses in Illinois has been depleted and tracks will have to rely on betting handle to fund purses. As a result, Arlington has cut their schedule to 3 days of racing per week in May, June, and September, save for holiday racing such as Memorial Day and Labor Day. For July and August, Arlington will move to a four-day racing schedule.

The compact racing schedule is likely to be the norm in the future for Illinois if they are to survive. There simply is not enough betting handle to justify running 4 or 5 days a week for an entire meet. That includes both Arlington Park and Hawthorne running fewer days per week.

Then there is the constant battle for slots, which many believe will save the industry. Slots at racetracks in Illinois have an uphill battle itself just to get on the radar. Former Illinois Governor Pat Quinn vetoed a gambling bill and it is doubtful his successor Bruce Rauner will consider it any time soon with the pension crisis with Illinois in a $9 billion dollar deficit. Rauner would consider slots at the racetracks, but more pressing issues will take precedent than the Illinois horse racing industry.

As for slots, many view them as the panacea for horse racing. The problem with that idea is the number of casinos that already exist in Illinois. There are already 10 riverboat casinos in Illinois, which is compounded by the thousands of establishments that have Video Gaming Terminals (VGTs). Adding more slots only makes sense if you can see even higher revenue, but the gambling market is quite saturated in Illinois.

Finally, we arrive at one of the biggest issues. That is the constant battle between Arlington Park and Hawthorne over racing dates and dark dates. Arlington constantly requests dates for racing beyond their recent traditional May through September as well as dark “host” dates in their non-racing months. The Illinois Racing Board has not let Arlington monopolize the dark “host” periods, which would effectively cut Hawthorne’s racing dates to only a few weeks in the spring and fall.

As a result, Arlington’s parent company, Churchill Downs Incorporated, has excluded the Illinois Derby run at Hawthorne from being part of the Road to the Kentucky Derby. The Illinois Derby had a purse of $750,000 in 2013 and 2014 but has cut it down to $400,000 for 2015 as a result of the casino money no longer being used.

There is no doubt that the future looks incredibly bleak for horse racing in Illinois. However, it is still around and can continue to survive as long as the powers operate shrewdly. The first thing people need to do is to stop hoping for slots. The slots debate has been going on for far too long in Illinois to think it will actually happen. Instead of waiting for a lifeline (albeit a meager one), it is best to work with what you have. Not having hope for slots will prevent people from the inevitable disappointment when another legislative session passes without a bill.

As for actual racing solutions, the first is to maintain a compact racing schedule of 3 days a week. This should apply to both Arlington Park and Hawthorne for the duration of their meets. Fewer racing days will lead to larger fields, which in turn leads to an increased betting handle. However, this will not happen overnight or in a year or two. It will take a concerted effort over several years to see results.

Another option is to try new ways to get fans to the track. Arlington was going to have night racing in 2012, which would require lighting for the track at the cost of about $1.5 million. A promotion similar to that would definitely get people out to the track, particularly among young fans, which the sports are dependent on for survival. An entire article could be made on how to attract younger fans to the track, but the bottom line is they are key to horse racing’s survival.

From a betting standpoint, a bettor favorite is lowering takeout. Tracks do not like to do this because they see lowering takeout as a loss of betting handle. However, lowering takeout across the board would bring in bettors to wager on the tracks. If someone is facing a takeout of 17% or 10%, they would most likely go for the 10% (assuming they are rational). As a result, they would get a higher return and would increase the amount of churn in the windows. Again, this is not to be done for one specific wager like a super high five. No, this needs to be done across the board on every wager to see how effective it is.

New ideas have to be tried otherwise Illinois racing will not be around much longer.

Hawthorne Racecourse is currently running its spring meet until Sunday, April 26. Through the end of March, Hawthorne will run Friday, Saturday, and Sunday each week. In April, Hawthorne will add Wednesdays to their racing schedule.

For the fall meet, Hawthorne will run from Friday, October 2 through Thursday, December 31. They will race Wednesday through Saturday with the exception of Thanksgiving (Nov. 26), Christmas Eve (Dec. 24), and Christmas Day (Dec. 25).

Arlington Park opens Friday, May 1 and will run through Saturday, September 26. As stated above, they will run Friday, Saturday, and Sunday in May and June with a special holiday card on Memorial Day (Monday, May 25). For July and August, Arlington will be racing Thursday through Sunday. In September, Arlington opens with a Friday through Monday schedule due to Labor Day on Monday, September 7. The remainder of the meeting will be conducted on a Thursday through Friday schedule.