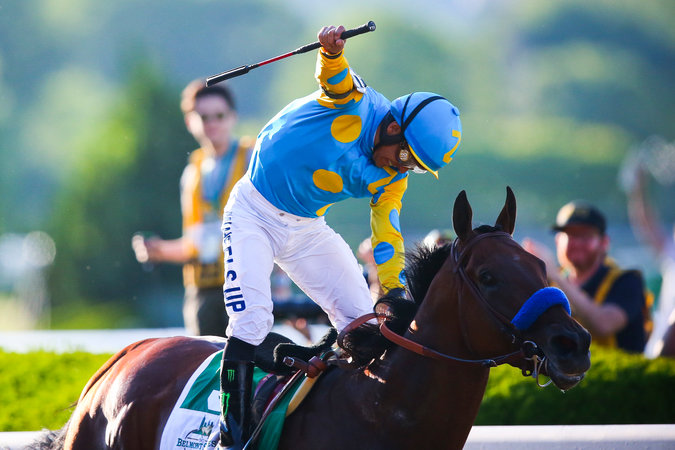 Jockey Victor Espinoza won the Triple Crown after having two previous attempts in 2002 aboard War Emblem and 2014 aboard California Chrome. For trainer Bob Baffert, it was his fourth attempt after tries in 1997 with Silver Charm, 1998 with Real Quiet, and 2002 with War Emblem.

American Pharoah went straight to the lead and Espinoza was determined to control the pace early on. To his outside was Materiality in second and Frosted in third. Mubtaahij was fourth on the rail with Keen Ice fifth, and Madefromlucky sixth. The trailing duo was Tale of Verve and Frammento with the latter nearly nine lengths off the pacesetter.

Pharoah set pressure-less fractions of 24.06 for the opening quarter and 48.83 for the opening half mile while Materiality was still on the outside about a length off the lead. Mubtaahij continued to save ground on the rail with Keen Ice, Frosted, and Madefromlucky behind him. Tale of Verve was starting to be pushed entering the far turn and Frammento was still the trailer.

After going six furlongs in 1:13.41 and a mile in 1:37.99, American Pharoah was set down for the final quarter of a mile and his only real threat was Frosted. Frosted came out in the stretch and looked like he would make a race of it down to the wire, but Pharoah simply pulled away to win by 5 1/2 lengths.

Frosted was second with Keen Ice coming back on for third and Mubtaahij was fourth. The remaining order of finish was Frammento, Madefromlucky, Tale of Verve, and Materiality. The entire chart can be found here via Equibase.

American Pharoah is by Pioneerof The Nile out of the Yankee Gentleman mare Littleprincessemma. He paid $3.50 to win, $2.80 to place, and $2.50 to show.

The debate will now shift to how American Pharoah stacks up against the other Triple Crown winners. That will rage on for decades after this incredible run of races. Pharoah is expected to run again in 2015 though it is highly unlikely he will run beyond the end of this year.